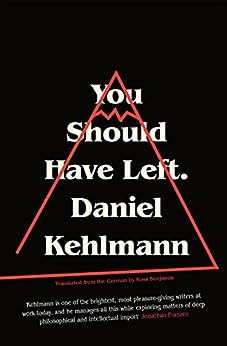 You Should Have Left: now a major motion picture (English Edition) Format Kindle

A thrilling exploration of psychological disturbance and fear from the bestselling and prize-winning author of Measuring the World.

On retreat in the wintry Alps with his family, a writer is optimistic about completing the sequel to his breakthrough film. Nothing to disturb him except the wind whispering around their glassy house. The perfect place to focus.

Intruding on that peace of mind, the demands of his four-year-old daughter splinter open long-simmering arguments with his wife. I love her, he writes in the notebook intended for his script. Why do we fight all the time?

Guilt and expectation strain at his concentration, and strain, too, at the walls of the house. They warp under his watch; at night, looking through the window, he sees impossible reflections on the snow outside.

Then the words start to appear in his notebook; the words he didn't write.

Familiar and forbidding by turns, this is an electrifying experiment in form by one of Europe's boldest writers. The ordinary struggles of a marriage transform, in Kehlmann's hands, into a twisted fable that stays darkly in the mind.

I don’t understand why I had a dream like that after such a blissful evening.

An empty room. A naked lightbulb on the ceiling, in the corner a chair with only three legs, one of them broken off. The door was locked; what was I afraid of?

The woman. Her narrow eyes were very close together, on either side of the root of her nose, which had a deep wrinkle down the middle. Her forehead too was wrinkled, and her lips were slightly open, so that I could see her teeth, yellowish like those of heavy smokers. But it was her eyes that were awful.

She stood there while my fear grew unbearable. I was trembling, I had difficulty breathing, my eyes were watering, my legs went weak—this didn’t actually happen to my real body, of course, so is it possible that I wasn’t afraid at all, that it was only my dream self, just as only my dream hands were trembling? No, the fear was as real as fear can be, and burned in me, and when it was no longer tolerable, the woman took a step back, as if she were releasing me, and only then was I back in our bedroom, where I heard Susanna’s steady breathing and saw the moonlight falling softly through the window, and the baby monitor showed our daughter in a deep sleep.


Breakfast: Bright grass and even brighter sun, no clouds, the air full of birds whose names I don’t know; I’ve always regretted that I can’t identify birds by name. The way they let the wind carry them, as effortlessly as if flying were the norm, as if it took hard work to stay on the ground.

At the moment Susanna is reading to Esther for the thousandth time from the book about the mouse and the cheese moon, the little one is laughing and clapping, and I’m quickly finishing my writing before I head out. We’re running low on provisions, someone has to go down to the village, and I volunteered. Get away. Susanna said thank you and held my hand, and I looked into her eyes. They’re not actually blue, more turquoise, with a sprinkling of black.


Will you read me your new scenes?
You don’t really want me to.
Don’t be so sensitive, of course I do.
I don’t have much yet.


It just dawned on me where I know the terrifying woman from. I saw her in the photo on the wall in the laundry room—just to the right of the Miele washing machine and the dryer, I noticed it on the first day. But to get nightmares from that is really too much. --Ce texte fait référence à l'édition hardcover.

“This mind-bending novella about a writer losing his marbles contains images that startle and linger....The most arresting of the book’s chilling moments might do for baby monitors what ‘Jaws’ did for swimming in the ocean....[Kehlmann] manages a few darkly comic flourishes...provocative...potent...pleasantly unsettling.”
—John Williams, The New York Times

“A beautifully crafted exercise in terror from one of Germany’s most celebrated contemporary authors….This novel is, in many ways, a classic haunted-house tale. There are warnings about the house from the people in the village below. There’s a creeping sense of horror. There are frightening phenomena that the narrator cannot explain. And there are specters. Kehlmann uses all these familiar tropes beautifully. But he also creates a sense of existential dread that transcends the typical ghost story….A book to keep you up at night.”
—Kirkus Reviews,*starred review*

“A well-crafted tale about one man unravelling due to forces beyond his control….You Should Have Left—part-horror, part-psychodrama—serves up effective shocks and thrills that keep us rapt and on the edge of our seats. The narrator’s journal slides from excerpts from his screenplay to accounts of his own creeped-out tragedy, and slips from coherence to jumbled trains of thought, and each time we lose purchase yet delight in the confusion and the tension.”
—Malcolm Forbes, The National

DANIEL KEHLMANN was born in Munich in 1975 and lives in Berlin and New York. His works have won the Candide Prize, the Doderer Prize, the Kleist Prize, the Welt Literature Prize, and the Thomas Mann Prize. Measuring the World was translated into more than forty languages and is one of the greatest successes in postwar German literature. --Ce texte fait référence à l'édition hardcover.
En lire plus

Karine D.
4,0 sur 5 étoiles A macabre novella with a punch
Commenté aux Pays-Bas le 7 février 2022
Achat vérifié
A short novella, a short story almost but one with a punch.

From the start, the atmosphere is macabre even though the setting is a stunning, bright, new house in the mountains where the sunshine comes in through the large bay windows and bounces off the kitchen appliances. But don't let it fool you: there is an ancient force lurking behind every corner, creating corners and eerie additional spaces. Or is it the narrator losing his sanity?

As with all short stories, I would have liked it to be longer as it was captivating, but the end was just perfect.
En lire plus
Signaler un abus
Traduire les commentaires en Français

Amazon Customer
2,0 sur 5 étoiles It's not a novel.
Commenté au Royaume-Uni le 22 juillet 2017
Achat vérifié
This is a short story and not a very good one at that. You can read it in an hour, it's not that scary, there's nothing new in it and the ending makes no sense. The interface of multiple universes has been explored before, and done better. I regret my five quid on this one.
En lire plus
4 personnes ont trouvé cela utile
Signaler un abus
Traduire les commentaires en Français
Afficher tous les commentaires
Signaler un problème
Cet article contient-il des contenus inappropriés ?
Rapport
Pensez-vous que cet article enfreint un droit d'auteur ?
Rapport
Est-ce que cet article présente des problèmes de qualité ou de mise en forme ?
Rapport