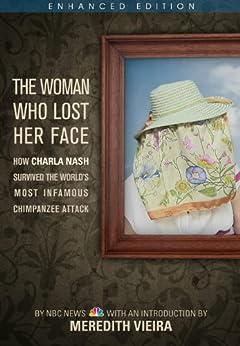 This enhanced eBook edition includes a video introduction from Meredith Vieira and more than 45 minutes of video interviews from NBC News.

“Through Charla I have learned that the will to survive is a powerful force and that human courage knows no bounds.” —NBC’s Meredith Vieira

Viciously attacked by a chimpanzee in 2009, Charla Nash was left so severely disfigured that she no longer had eyes to see the world, hands to feel it or even a face to show it. By her own doctors’ accounts, she never should have survived her injuries.

Charla’s story is one of incredible strength, fierce determination and cutting-edge medicine. NBC News and Meredith Vieira have been covering the story since the life-altering attack, documenting Charla’s unfaltering spirit and the remarkable surgeries that not only kept her alive, but gave her a new face and, ultimately, restored her very humanity.

Featuring candid and exclusive interviews with Charla, her family, her doctors and the chimpanzee’s owner, The Woman Who Lost Her Face is an intimate look at Charla’s life before and after the attack. This in-depth account takes you inside the operating rooms and hospitals where medical history was made and includes new details about the chimpanzee who mauled Charla to the brink of death and the woman who raised the animal as her son. The Woman Who Lost Her Face also features never-before-seen images of Charla and insight from the NBC News producers and reporters who covered the story.

Julie Haigh
5,0 sur 5 étoiles Amazing how she survived!
Commenté au Royaume-Uni le 28 décembre 2017
Achat vérifié
I got this book free and it was one I'd had on my kindle for quite a while. It's still free and well worth reading. I decided to start it late one night and, as it's only about 100 pages, just had to keep reading and nearly finished it in one go-even though it was 1.20am. Such horrifying injuries, it's amazing how she survived the attack.

Just a tip for anyone who reads this book: I found I had two editions of this. I read the text-only edition first and there is also an enhanced edition with a few video cameos-I watched all the clips back in that after reading the other one. They're all fairly short, just 1-2 minutes-it's very interesting to see both editions. I wouldn't have enjoyed reading it and keep breaking off to watch the clips so it was better for me to see all these after. The audio and video edition won't work on all devices-but did on my iPad-I think it also will on computer and some Kindle Fires-it didn't on my Kindle Fire HDX though.
En lire plus
Signaler un abus
Traduire les commentaires en Français

Angie8329
5,0 sur 5 étoiles Understated
Commenté au Royaume-Uni le 17 août 2018
Achat vérifié
I chose this book with some trepidation but was pleasantly surprised to find d that it wasn't macabre or depressing. Charms Nash is one extremely special person with a constitution to match. HER daught Brian's also deserves mention because of what she has seen her mother endure and how she has managed to get on with her life. Thank you for the kind and thoughtful way this book has been written and published.
En lire plus
Signaler un abus
Traduire les commentaires en Français

Cazziek
5,0 sur 5 étoiles Captivating
Commenté au Royaume-Uni le 8 mars 2018
Achat vérifié
This is not the longest of works, but every word had me hoping for Charla’s recovery, whilst feeling angry that this happened because someone wanted to keep a wild animal that has no place in a home, for their own entertainment.
The work is interspersed with short video clips. Some sections are hard to read, but you know you this is a small price to pay compared to what her and her family went through.
En lire plus
Signaler un abus
Traduire les commentaires en Français