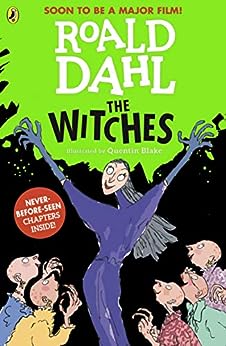 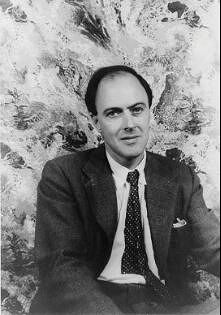 Real witches dress in ordinary clothes and look like ordinary women. But they are not ordinary. They are always plotting and scheming with murderous, bloodthirsty thoughts - and they hate children.
The Grand High Witch hates children most of all and plans to make every single one of YOU disappear.
Only one boy and his grandmother can stop her, but if their plan fails the Grand High Witch will frizzle them like fritters, and then what...? --Ce texte fait référence à l'édition paperback.

Roald Dahl was a spy, ace fighter pilot, chocolate historian and medical inventor. He was also the author of Matilda, Charlie and the Chocolate Factory, The BFG and many more brilliant stories. He remains THE WORLD'S NUMBER ONE STORYTELLER.

Quentin Blake has illustrated more than three hundred books and was Roald Dahl's favourite illustrator. In 1980 he won the prestigious Kate Greenaway Medal. In 1999 he became the first ever Children's Laureate and in 2013 he was knighted for services to illustration.

This Roald Dahl classic tells the scary, funny and imaginative tale of a seven-year-old boy who has a run-in with some real-life witches! "In fairy tales witches always wear silly black hats and black cloaks and they ride on broomsticks. But this is not a fairy tale. This is about REAL WITCHES. REAL WITCHES dress in ordinary clothes and look very much like ordinary women. They live in ordinary houses and they work in ordinary jobs. That is why they are so hard to catch." Witches, as our hero learns, hate children. With the help of a friend and his somewhat-magical grandmother, our hero tries to expose the witches before they dispose of him. Ages 7-12. --Ce texte fait référence à l'édition kindle_edition.

Marsh's performance has a sinister side that may be too scary to the audience Dahl intends to delight. The abridgment cuts too much context, which would otherwise mitigate frightening details. R.F.W. (c)AudioFile, Portland, Maine --Ce texte fait référence à l'édition kindle_edition.

A young boy and his Norwegian grandmother, who is an expert on witches, together foil a witches' plot to destroy the world's children by turning them into mice. --Ce texte fait référence à l'édition kindle_edition.

A courageous young boy struggles to save the children of Britain from the nasty schemes of the Grand High Witch of the World. Book available. --Ce texte fait référence à l'édition kindle_edition.

“REAL WITCHES dress in ordinary clothes and look very much like ordinary women. They live in ordinary houses and they work in ORDINARY JOBS.”

So you could be living right next door to a witch and you’d never even know it! Luckily, this story, about the defeat of the gruesome Grand High Witch and her evil cronies, points out the vital clues. --Ce texte fait référence à l'édition kindle_edition.

Roald Dahl's wonderful and outrageous tales continue to delight children the world over. Some of his most beloved stories include Charlie and the Chocolate Factory, James and the Giant Peach, Matilda, and The Witches. --Ce texte fait référence à l'édition kindle_edition.

"An orphan boy...discovers the true nature of witches and then has the misfortune to be transformed into a mouse by The Grand High Witch of All the World...A curious but honest tale which deals with matters of crucial importance to children: smallness, the existence of evil in the world, mourning, separation, death." --The New York Times Book Review
--Ce texte fait référence à l'édition kindle_edition.

Caeline
5,0 sur 5 étoiles A classical
Commenté en France le 1 février 2017
Achat vérifié
Roald Dahl is always a pleasure to read, I got a lot of his books, I also enjoy Quentin Blake's illustrations. The story is perfect for kids, witches always get their attention, the story is cute but can be annoying at one moment when detailed are extremely important.
En lire plus
Une personne a trouvé cela utile
Utile
Signaler un abus
Traduire les commentaires en Français

J. Ang
5,0 sur 5 étoiles As Long As There is Love
Commenté au Royaume-Uni le 13 octobre 2018
Achat vérifié
What a delightful and wickedly funny book! Ostensibly about scary witches that kill children, Roald Dahl has written a classic heartwarming story of the bond between a newly-orphaned boy, who is strangely never given a name (I didn’t even realise that until I pored through the book again to find his name) and his Grandmama, from Norway. The fact that neither the boy nor Grandmama is named makes the story even more magical on hindsight, because this could be a story about just any boy and his grandmother, giving it an Everyman feel to this tale.

Grandmama’s country of origin is important because Grandmama has stories to tell about her girlhood experiences of witches growing up there, Norway being some sort of high witch grand central. The premise behind her stories is to distract him from his sadness of losing his parents. This is marvellously dealt with because Grandmama’s stories sound almost too fantastical to be true until they return to Bournemouth, England, to honour the boy’s father’s will. There, the boy finds out first hand that witches are real, and that they are just as Grandmama has described them, innocuously like any other woman on the street except for their gloves that hide their claws, bald heads under wigs, strange eyes, and toeless square feet hidden in pointy shoes. And they are all out to rid the world of pesky children, who smell like dog poo to them.

I can see where David Walliams got his inspiration from in his equally engaging and endearing “Gangsta Granny”, but Dahl still wins hands-down for integrating all the elements of horror, the macabre and magical, together with the bravery of the boy and the love between him and Grandmama, the latter who never ever flinches or talks down to the boy the way you expect an adult to when speaking to her grandson, even when he is literally turned into a mouse by the wicked Grand High Witch.

An altogether lovely story to savour, and I’m glad I found the time to read it for the first time in my mellow adulthood, and still be able to appreciate the magic of it.

girlpower123
5,0 sur 5 étoiles The Witches review
Commenté au Royaume-Uni le 26 novembre 2020
Achat vérifié
I chose this rating because I like books about magic and adventure.
I liked the bit where the narrator was peeking through the screen in a hotel named Hotel Magnificent and saw the witches run their private RSPCC( Royal Society of Prevention of Cruelty to Children)meeting.
I disliked the bit when Bruno the mouse, the narrator's best friend, died of old age. It was devastating and almost impossible to believe! I didn't like that bit.

On the other hand, I love this book and would recommend that anyone who likes magic and adventure books to read it.
En lire plus
Signaler un abus
Traduire les commentaires en Français

Tim Roast
5,0 sur 5 étoiles Classic Roald Dahl tale
Commenté au Royaume-Uni le 24 septembre 2014
Achat vérifié
My wife remembers this book from her childhood as being her favourite book so she bought it for our 7-year-old daughter and we read it over several nights. My daughter also liked it and said it was "really fun".

The story starts with the unnamed boy narrator (at the beginning where the main characters are introduced he is simply called "boy") being told about witches by his grandmama. But "this is not a fairy-tale" she is telling. "This is about REAL WITCHES" and "real witches hate children." They disguise themselves as women and make children disappear.

The grandmother is funny because she is so un-grandma-like as she puffs away on her black cigar.

After that bout of story-telling the book sees the boy come into contact with real witches. Not just one witch though as he gets stuck in a room with about 200 of them. He has to hide but witches can smell children out, and do just that. This is where the real witching begins and the dastardly things they do comes to the fore.

Amazon Customer
5,0 sur 5 étoiles Faultless!
Commenté au Royaume-Uni le 7 mai 2014
Achat vérifié
This book has been read and reviews thousands of times but how can you not love Roald Dahls book? This is fantastic and I won't go into it because there are very few people who don't know the story already but if you don't get too it!!!

The Paperback - It has seen many different covers and this one is just a good as any of the others, Quentin Blake still attracts children who seem to be able to reckoning his work anywhere. The print is of good side and well looks good on the shelf!

The Audio Book - Have listened to many different versions over the years the most recent being Miranda Richardson but no one did this as well as Simon Callow. With his you just loose yourself in the story and his take on the Witches song 'Oh where have all the children gone' is hilarious! The only downside it's abridged where the newer Miranda Richardson version is unabridged but I would still pick Callow's version ever time.

Kindle - The same as the paperback just quicker to download it if you children are demanding to read it as mine were. illustrations are just as great, a couple of typos but nothing the drastic. Maybe being an older book now it could be a little cheaper for the ebook but worth every penny none the less.
En lire plus
Une personne a trouvé cela utile
Signaler un abus
Traduire les commentaires en Français

shelley Elliss
5,0 sur 5 étoiles What a great book
Commenté au Royaume-Uni le 31 octobre 2018
Achat vérifié
I read this years ago when I was a child and it really captured my imagination. Even now it is a favourite book of mine. Every child should read this book. Roald Dahl was a master story teller. I would give this book more stars if I could.
En lire plus
Signaler un abus
Traduire les commentaires en Français
Afficher tous les commentaires
Retour en haut
Pour mieux nous connaître
Gagnez de l'argent
Moyens de paiement Amazon
Besoin d'aide ?
© 1996-2021, Amazon.com, Inc. ou ses filiales.