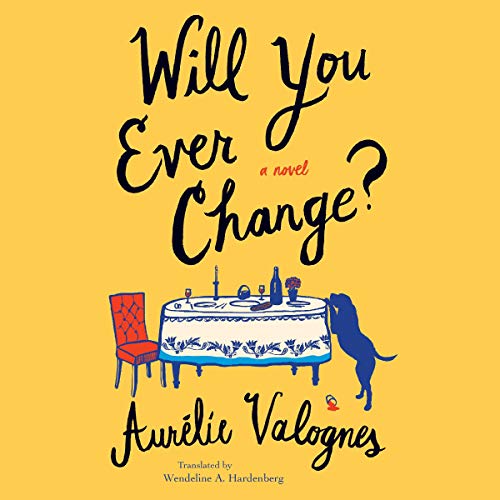 Will You Ever Change?

Charming, quirky, and funny, this oh-so-relatable novel from the bestselling author of Out of Sorts shines a light on the always-complicated je ne sais quoi of every family's relationship.

As Martine and Jacques Le Guennec prepare for their annual family Christmas dinner, Martine reminds her husband to be on his best behavior. Their son Nicolas is bringing his girlfriend, Jeanne, to their home for the first time, and she doesn't want Jacques to scare this one off.

Jacques has always ruled his roost with patriarchal bravado, and he can't help but verbally antagonize everyone - especially the wives of his sons. Jeanne, a strong-willed woman who grew up without a father, clashes with the curmudgeon, and she worries that her boyfriend might be too much like his father.

It's all starting to make Martine question everything about her relationship with her husband. And, though she makes that perfectly clear to him, the old dog is not anxious to learn new tricks.

When Jeanne saves Jacques's life, he begins to realize it may be time to change his ways if he wants to hold on to his wife and keep the family close. But is it too late?

I found this book to be entertaining. It's light-hearted and a quick read, good for a holiday or vacation.

The story takes place over a year and tells vignette stories about a large family and their family gatherings. Being part of a large family that has holiday gatherings, I could relate to the tension. There is really nothing like waiting for a certain family member to say the wrong thing or to serve food that doesn't match someone's diet. Those eggshells are depicted in the story as the matriarch tries in vain to encourage the patriarch to change his ways.

The family in the story is financially comfortable, so most of the story elements aren't relatable to all families - who eats foie gras? Certainly the attitudes and frustrations translate well to most people.

Speaking of translation, this book is translated from French to English. It's a bit bumpy in parts, but overall it's decent. My only criticism is flow, but it's entirely possible that there are flow issues in the original French.

Being a quick read, there isn't a deep level of character or storyline development. That being said, it's worth a read - especially if you are part of a larger family with in-law quirks and unique family traditions.
En lire plus
2 personnes ont trouvé cela utile
Signaler un abus
Traduire les commentaires en Français

Jessica
4,0 sur 5 étoiles He doesn't make things easy with his wife
Commenté aux États-Unis le 20 juillet 2017
Achat vérifié
The latest book by Aurélie Valognes, Will You Ever Change, is a look inside the Le Guennec family: Martine, Jacques, and their three sons and respective significant others. The girls aren't completely innocent, but Jacques does nothing to help the strained relationship between the girls and their in-laws. He doesn't make things easy with his wife, either. They have a very old fashioned relationship where he worked to bring money home and Martine did absolutely everything else.

Martine is tired of being taken advantage of by her husband and of not having great relationships with her daughters-in-law so she gives Jacques an ultimatum: be kind and considerate to his family or leave it.

Out of Sorts is the first book I read by this author and I really loved it. These books are similar in that they focus on a really grumpy person changing themselves for the better. Another book of this type, A Man Called Ove, I finished today and may have had tears in my eyes at work.
En lire plus
Signaler un abus
Traduire les commentaires en Français

L Kelley
4,0 sur 5 étoiles I won this ebook from Goodreads and enjoyed the story
Commenté aux États-Unis le 10 juillet 2017
Achat vérifié
I won this ebook from Goodreads and enjoyed the story. The father of three grown boys tends to speak his mind with his two daughters in law, resulting in hurt feelings and family drama. When the youngest son brings his new fiance to be home for the holidays the mother tells the father to be on his best behavior so he won't scare the girl away. The father and fiance to be do annoy each other. However she ends up saving the father's life when he chokes on a piece of food. After that he seems to realize how obnoxious he is and remembers the things that are important in life, which leads to him changing his ways and a happy family. This was a fast read, the characters and story were believable. It was funny at times and tugged at your heart too. You won't be disappointed in this story.
En lire plus
Une personne a trouvé cela utile
Signaler un abus
Traduire les commentaires en Français

Melissa G.
5,0 sur 5 étoiles fun family dynamics
Commenté aux États-Unis le 6 avril 2022
Achat vérifié
I thoroughly enjoyed this entertaining exploration of fun family dynamics! Some of the translation issues were a bit iffy, but I got over that quickly and had myself a Great read!
En lire plus
Signaler un abus
Traduire les commentaires en Français
Afficher tous les commentaires