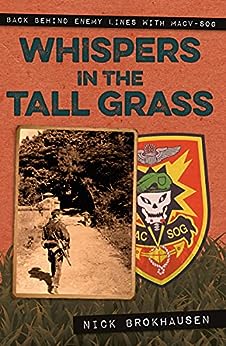 Whispers in the Tall Grass: Back Behind Enemy Lines with Macv–Sog (English Edition) Format Kindle

“[An] exceptionally raw look at the Vietnam War . . . an excellent tribute to the generation that fought, laughed, and died in Southeast Asia.” —New York Journal of Books

This is the second volume of a Green Beret’s riveting memoir of his time serving in Recon Teams Habu and Crusader, CNN, part of Military Assistance Command, Vietnam—Studies and Observations Group (MACV-SOG).

Picking up where We Few left off, Whispers in the Tall Grass opens as the war moves into a new phase. The enemy are using special formations to hunt recon teams and missions are now rarely accomplished without heavy contact. Despite the teams’ careful prep, losses are mounting. More and more missions are extracted by Bright Lights until eventually classic recon missions are almost impossible, and the teams briefly trial HALO insertion. Finally, as the US prepares to withdraw, the teams undertake back-to-back missions directing air strikes and disrupting supply lines to ease the pressure on the ARVN. Broken by the pace, but desperate not to leave the Yards, Brokhausen is ordered to out-process, his request for extension denied, and is forced to leave his friends—his brothers—behind.

Written in the same vivid, immediate style that made We Few a cult classic, Whispers in the Tall Grass follows Habu, Crusader and other teams as they undertake missions in this new, deadlier phase of the war. The narrative veers from hair-raising to tragic and back as the teams insert into hot targets, act as Bright Light for stricken teams, and play hard in between missions to diffuse the ever-rising tension.

“Brokhausen tells all in a masterfully gonzo style of reporting and recollection shaped by clever gallows humor.” —Booklist
En lire plus
Previous page
Next page

Special Forces veteran Nick Brokhausen joined the SOG on his second tour in Vietnam, and took part in some of the most dangerous missions of the war, deep in enemy territory. After Vietnam, Nick Brokhausen has led an interesting life, which has included work in security projects in a number of countries. He now runs a tech company and an armoring company. --Ce texte fait référence à l'édition hardcover.

Across the Pond
5,0 sur 5 étoiles Unbelievable Courage in the face of impossible odds.
Commenté au Royaume-Uni le 14 février 2021
Achat vérifié
Excellent account of the brave, audacious and fearless men of MACV SOG and their recon teams. Operations “over the fence” takes a certain amount of courage and guts that most human beings do not possess. Moreover, to go back, day after day, hoping for it to be different but knowing deep down that it won’t be, is beyond comprehension. Excellent book. Looking forward to authors next book!
En lire plus
Signaler un abus
Traduire les commentaires en Français

Barclay West
5,0 sur 5 étoiles A good read.
Commenté au Canada le 2 juillet 2020
Achat vérifié
Told with honesty and feeling. The depth of caring for the. ”little people” , the Bru tribesmen who were left to their own devices against the NVA when the pull out came, is palpable. Much of the camaraderie of those who routinely “went across the fence”, is portrayed here, and the craziness that helped them get through it all, is painted vividly in the narrative. I couldn’t put it down....👍🏻.
En lire plus
Signaler un abus
Traduire les commentaires en Français