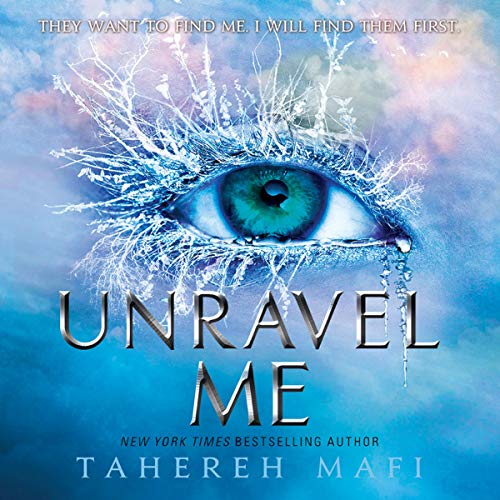 They want to find me. I will find them first.

Juliette has escaped. She has found the headquarters of the rebel resistance - and people like her. People with gifts. She is free from The Reestablishment, free from their plan to use her as a weapon and free to love Adam.

But Juliette will never be free from her lethal touch. Or from Warner, who wants Juliette more than she ever thought possible.

In this heart-racing sequel to the New York Times best-selling Shatter Me, Juliette has to make life-changing decisions between what she wants and what she thinks is right. Decisions that might involve choosing between her heart - and the life of those she loves.

Tahereh Mafi is the New York Times best-selling author of the Shatter Me series which has been published in more than 30 languages around the world. She was born in a small city somewhere in Connecticut and currently resides in Santa Monica, California, with her husband, Ransom Riggs, fellow best-selling author of Miss Peregrine's Home for Peculiar Children, and their young daughter. She can usually be found overcaffeinated and stuck in a book.

Paice10
1,0 sur 5 étoiles cliche after cliche
Commenté au Royaume-Uni le 17 juin 2022
Achat vérifié
Don’t let your daughters read this, the female protagonist falls so far short of being a good role model. Yes she is physically strong but she is such a fickle character. She loves the boy…she loves another boy. She doesn’t want to hurt people…yes she wants to hurt people (but she is always incapacitated when it matters). Another annoying feature is that all the male characters she sees are just so beautiful. Why is that necessary? She seems to have no self control and goes weak at the knees and unable to think when the love interests give her a kiss. Not a good character trait for any self-respecting heroine. It gets a bit tedious after a while. I was also frustrated by her inability to communicate her thoughts out loud (is it a lie if she just doesn’t say it? Er yes!) and her capacity to protect the “bad guy” at all costs just became illogical. I ended up scan reading the last half of the book just to see if it would get better…it did not. She’s no Katniss Everdeen. So I’ll probably just find out what happens in the books by searching online, I won’t be wasting my time reading the books in the hope of character development that may not come.
En lire plus
2 personnes ont trouvé cela utile
Signaler un abus
Traduire les commentaires en Français

Where do I even begin? I was a wreck for the entirety of this book.

My heart goes out to Juliette, she feels everything so strongly and when everything is pilling up she breaks down to prevent herself from breaking apart. She goes through an awful lot in this book. Trying to adjust to new surroundings, new people, complications in the relationships she thought were solid, and then the earth shattering revelation she experienced towards the end there that almost broke me.

I love her. I love absolutely everything about her.

And I love Warner – I don’t care what anyone says, I’ve loved him from day one and nothing will change that. This book just made me love him even more, and my heart aches for him, for what he’s gone through.

I trust Adam, that mistrust peeled away during this book but I don’t particularly care for him. I like him but I could do without him. That reveal though… It floored me.

Kenji bugged me a lot during this. The ‘we’ve all got problems, so grow up' attitude really annoyed me. Yeah, everyone there has their own story but they weren’t recruited last minute and pressured into hurrying the hell up in figuring out their abilities to fight for people she doesn’t even know. That’s a lot of pressure.

Anderson is a bad B word!! Correction, he is all the bad B words!

This book was absolutely everything and I need more but I’m also afraid to keep reading. I’m not sure if my heart can take it

“Do you like Shakespeare?” he asks me.
I shake my head. “All I know about him is that he stole my name and spelled it wrong.”

The more I dive into Tahereh's world the more I absolutely fall in love. Juliette is such an amazing and versatile character. She's delicate but strong, full of hope and consumed with doubt and so certain where here heart lies and yet completely uncertain at the same time. The further we get into her story the more twisted and complicated it becomes.

I love the people who surround her and build her up and make her stronger. The unexpected friendship with Kenji, her love for Adam but her need to keep him safe and at a distance, the bond she is building with Castle and the friendships and ties she is forming with others at Omega Point. And her difficult and tumultuous relationship with Warner and what truth her getting to know him further exposes.

Oh I am so excited to jump into Ignite Me and find out what happens.
En lire plus
Signaler un abus
Traduire les commentaires en Français

Dan Hopkins
1,0 sur 5 étoiles If you're looking for a stopgap read until the next Throne of Glass volume... this is NOT it
Commenté au Royaume-Uni le 4 juillet 2018
Achat vérifié
I bought the first in the series because so many people seemed to compare them to Sarah J Maas' Throne of Glass - which I love. I wasn't particularly enamoured with the writing style here, but the story was intruiging enough to keep me reading.

This second in the series is just tripe. I gather I'm not necessarily the target demographic, but where Sarah J Maas can weave a tale that's thrilling and full of genuinely interesting characters ... this can't seem to do either. The 'heroine' is the most irritating, self absorbed, sulky excuse for a plastic teenager caricature that I've ever read.

There's only so many times I can read about her "drowing" in the cobalt blue eyes of her crush. We get it. Or having another irrational meltdown. Obviously, a fantasy series requires some suspension of belief, but the characters themselves at least need to be believable.

I'm stunned at how well rated this is - if I could have refunded it, I would.
En lire plus
2 personnes ont trouvé cela utile
Signaler un abus
Traduire les commentaires en Français

Jess. (JessReviews)
5,0 sur 5 étoiles Warner was the best
Commenté au Royaume-Uni le 3 août 2019
Achat vérifié
I enjoyed this book and found it better than the first. The storyline develops and the plot moves at a good pace.

Juliette is a good main character. She has so much power and yet she doesn't know how to use it. She finally starts coming into her own in this book. She gains in confidence and bravery.

Adam, however, was starting to annoy me in this book. I found him quite selfish. He may be trying to look after Juliette, but she was actually better off without him. She only gained in confidence when he wasn't there. He holds her back and is actually quite needy.

Warner is the reason I have given this book the rating I have. I absolutely love him. We see the real him in this book and get to see more into his background and upbringing. He may have done some horrible things, but you can see and understand why he has. The last third of the book, I just fell in love with him. He, for me, made this book what it is.

It was nice to see the others abilities. Everyone was unique in their own way.

Overall, I would recommend this series. The storyline is good and enjoyable. I would also recommend it just because of Warner.