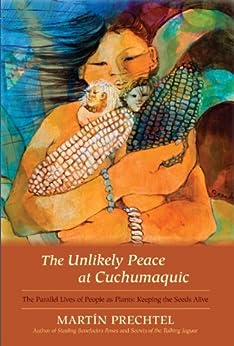 The Unlikely Peace at Cuchumaquic: The Parallel Lives of People as Plants: Keeping the Seeds Alive (English Edition) Format Kindle

“The Unlikely Peace at Cuchumaquic is like one of the seeds Martín Prechtel describes. When planted in fertile ground, the words and thoughts and images and prayers will grow into a life-giving complexity. This is a wondrous and powerful book.”—Derrick Jensen, activist and author of Dreams and Endgame

“A brilliant writer, Martín Prechtel bears gifts from our ancestors, gifts that are essential to awaken a wayward humanity to the need for a spiritual ecology."—Michael Harner, author of  The Way of the Shaman

“Prechtel’s words are like the wildly colored heirloom kernels of corn born of ancestral knowledge that traditional Maya farmers prayerfully place into the holy earth. Once planted, the author waters these sacred seeds of the Indigenous Soul with heartfelt compassion for a spiritually disconnected humanity in this period of global transformation. May these sprouts of indigenous awareness flourish and produce vital seeds for a collective return to an awareness of our oneness with nature.”—Robert Sitler, director of Latin American Studies at Stetson University, Florida, and author of The Living Maya

“A haunting and enchanting prose poem that encompasses a shattering earthquake, the rapacious disaster capitalism that fed on it, and the resilience of an indigenous culture whose authenticity carried it through those dark times.… Martín Prechtel's deep wisdom has given us a model that can be replicated everywhere, so that from the moral bankruptcy and collapse of global capitalism a true human culture, in union with the wild, can emerge.”—Toby Hemenway, author of Gaia's Garden

“It is very important, especially nowadays in the face of the monsters of GMO agribusnesses, that someone speaks out so clearly and eloquently about saving the pure and strong seeds that nature itself brought forth. And, of course, Martín Prechtel is also right about the seeds we carry within us, given to us from our age-old culture.…”—Wolf D. Storl, author of The Herbal Lore of Wise Women and Wortcunners

"Martín Prechtel has seen it all: He grew up on a Pueblo Indian reservation, was apprenticed to a Guatemalan medicine man and settled in the United States after fleeing the Guatemalan civil war. The Unlikely Peace at Cuchumaquic: The Parallel Lives of People as Plants: Keeping the Seeds Alive (North Atlantic Books) relates the preservation of seeds and plant life to the similar seeds of spirituality in human life as he chronicles his own life journey." —Indian Country

"The Unlikely Peace at Cuchumaquic: The Parallel Lives of People as Plants: Keeping the Seeds Alive reflects the author's experiences growing up on a Pueblo Indian reservation and his years of apprenticing to a Guatemalan shaman, returning to the U.S. after fleeing the country's civil war ... Real human culture is exterminated when the non-genetically modified seeds of plants that feed us are lost - and this appraoches the issue both metaphorically and spiritually, discussing how such seeds of spirituality and culture need to be cherished, replanted, and harvested. Collections strong in tribal insights, ecology, spirituality, and autobiography alike will find this a moving, passionate work." —Midwest Book Review --Ce texte fait référence à l'édition kindle_edition.

A master of eloquence and innovative language, Martín Prechtel is a writer, artist, and teacher who, through his work both written and spoken, hopes to promote the subtlety, irony, and premodern vitality hidden in any living language. A half-blood Native American with a Pueblo Indian upbringing, he left New Mexico to live in the village of Santiago Atitlán, Guatemala, eventually becoming a full member of the Tzutujil Mayan community there. For many years he served as a principal in that body of village leaders responsible for instructing the young people in the meanings of their ancient stories through the rituals of adult rites of passage. Once again residing in his native New Mexico, Prechtel teaches at his international school, Bolad’s Kitchen. Through music, ritual, farming, sacred architecture, ancient textiles, tools, and story, Prechtel helps people in many lands to remember their own sense of place in the daily sacred through the search for the Indigenous Soul. --Ce texte fait référence à l'édition kindle_edition.

Mr M
5,0 sur 5 étoiles Give Peace a chance
Commenté au Royaume-Uni le 10 juin 2012
Achat vérifié
Martin's book is a rare seed indeed. Now on my third reading I am walking at the slowest pace and rereading every line, sentence and word as I do not want to miss anything. I have a feeling this seed is vitally important and the images Martin conjures are striking and thought provoking. There are layer upon layer in this book that needs digesting and metabolising. The idea that we as part of the systems that created the Atom bomb are superior in any way to those 'simple' Indigenous peoples and cultures makes me weep. The book brings laughter, joy, guilt, embarrassment and even some hope that a tiny seed, unseen perhaps, is not too far away, if only we knew where to look. I am learning how to find seeds, and how to plant them with honour and dignity - A book to treasure and cherish--ENJOY!
En lire plus
7 personnes ont trouvé cela utile
Signaler un abus
Traduire les commentaires en Français

Stephen Victor
5,0 sur 5 étoiles Brilliant
Commenté au Royaume-Uni le 25 novembre 2013
Achat vérifié
I know this author... I have worked with him. His eloquence is unsurpassed... his wisdom and generosity in giving his promise to the world is right here is this wonderful read!!!!
En lire plus
2 personnes ont trouvé cela utile
Signaler un abus
Traduire les commentaires en Français

Derek Stephen McPhail
5,0 sur 5 étoiles latest from Martin Prechtel
Commenté au Canada le 5 mars 2014
Achat vérifié
another in the vividly enchanting and enlightening series of books by Martin Prechtel, that affirm mankind's Aboriginal Soul; in the context of his observation of the resilience of the Tzutujil Mayan culture, that he embraced for many years, before it was ravaged by the C.I.A. supported Guatemalan military dictatorship's death squads. in the face of the current monsters of GMO agribusiness, Martin eloquently speaks out in defence of nature's pure and natural seed stock; as well as, the seeds we carry within us. ﻿
En lire plus
3 personnes ont trouvé cela utile
Signaler un abus
Traduire les commentaires en Français