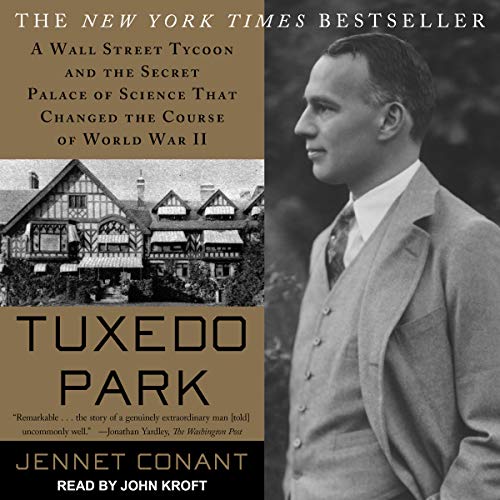 Tuxedo Park: A Wall Street Tycoon and the Secret Palace of Science That Changed the Course of World War II

This is the untold story of an eccentric Wall Street tycoon and the circle of scientific geniuses he assembled before World War II to develop the science for radar and the atomic bomb. Together they changed the course of history.

In the late 1930s, legendary financier, philanthropist, and society figure Alfred Lee Loomis gathered the most visionary scientific minds of the 20th century - Albert Einstein, Werner Heisenberg, Niels Bohr, Enrico Fermi, and others - at his state-of-the-art laboratory in Tuxedo Park, New York. He established a top-secret defense laboratory at MIT and personally bankrolled pioneering research into new, high-powered radar detection systems that helped defeat the German Air Force and U-boats. With Ernest Lawrence, the Nobel Prize-winning physicist, he pushed Franklin Delano Roosevelt to fund research in nuclear fission, which led to the development of the atomic bomb.

Jennet Conant, the granddaughter of James Bryant Conant, one of the leading scientific advisers of World War II, enjoyed unprecedented access to Loomis' papers, as well as to people intimately involved in his life and work. She pierces through Loomis' obsessive secrecy and illuminates his role in assuring the Allied victory.

Amazon Customer
5,0 sur 5 étoiles Perhaps not the whole story
Commenté au Royaume-Uni 🇬🇧 le 25 avril 2018
Achat vérifié
This was a fascinating book, not least for for the main protagonist, Alfred Loomis. Others have criticised the book for lacking excitement. What may be lacking here is making this a gripping description of how Loomis had the energy, drive and self generated resources to run with the cavity magnetron when it arrived from England with Edward Bowen. For the exciting bit see Bowen's book Radar Days. That has an excellent description of how Loomis ran with the project but this again goes off the boil. I was interested to know how and why Bowen (as well as Tizard) became completely sidelined as far as further radar developments were concerned. The final stage in Loomis' role in the atom bomb development is again rather plodding.
En lire plus
Une personne a trouvé cela utile
Signaler un abus
Traduire les commentaires en Français