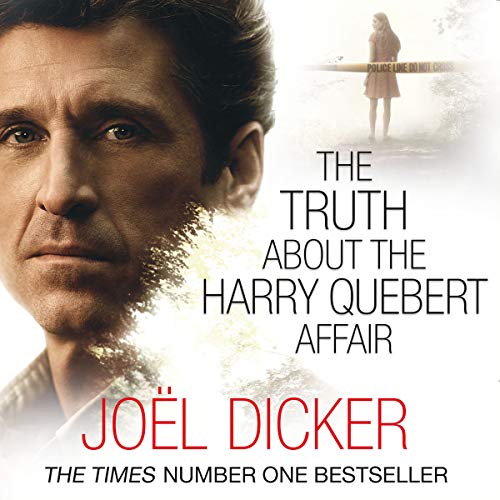 The Truth About the Harry Quebert Affair

August 30, 1975. The day of the disappearance. The day Somerset, New Hampshire, lost its innocence.

That summer, struggling author Harry Quebert fell in love with 15-year-old Nola Kellergan. Thirty-three years later, her body is dug up from his yard, along with a manuscript copy of the novel that made him a household name. Quebert is the only suspect.

Marcus Goldman - Quebert's most gifted protégé - throws off his writer's block to clear his mentor's name. Solving the case and penning a new best seller soon merge into one. As his book begins to take on a life of its own, the nation is gripped by the mystery of 'The Girl Who Touched the Heart of America'.

But with Nola, in death as in life, nothing is ever as it seems.

Delphine
3,0 sur 5 étoiles Very well written but not my cup of tea
Commenté en France le 22 juillet 2016
Achat vérifié
The story is very well written and the choice to use flashbacks gives this book a very cinematic feel. However, I did not really enjoy this book for several reasons: the characters feel a bit flat, although the main character is obviously the most fleshed out, he seems like a bit of a cliché, and the same goes for Harry Quebert and the love interest of the narrator, who is the least interesting character of all. Furthermore, towards the end it seemed like the writer desperately wanted to surprise the audience by adding twist after twist, to the point where it was hard to keep up with the actual story and it felt like a gimmick and I no longer really cared to know "the truth". So overall, I have to say it took me quite some time to finish this book, only because I stopped feeling involved towards the story halfway though. Nevertheless, to be fair, I have to admit that the love story that is so central to the plot left me completely underwhelmed and is generally not my cup of tea so of course, someone who is more into this kind of genre is more likely to appreciate the book than I did.
En lire plus
3 personnes ont trouvé cela utile
Utile
Signaler un abus
Traduire les commentaires en Français

MEEGAN Angela
5,0 sur 5 étoiles One of the best reads ever
Commenté en France le 19 mai 2014
Achat vérifié
I read this book in English & waited months for kindle version. It was worth it. I missed my train stop on more than one occasion I was so engrossed. i literally could not put it down & even when I was not reading it I was thinking about it. Was sad when I had finished as thought it was take me much longer to read over 600 pages. Every time you think the mystery is solved something else turns up. Definitely recommend it but watch out for your train station😊
En lire plus
7 personnes ont trouvé cela utile
Utile
Signaler un abus
Traduire les commentaires en Français

Ulrich Heulle
5,0 sur 5 étoiles One of my favorite books
Commenté en France le 17 juillet 2018
Achat vérifié
First, I read this book in French, which is my maternal language. I was so crazy about this compelling, flawless, and perfectly written story, that I decided to read it in English. I ADORE this story and I think everyone who likes reading bestsellers, should read it at least once. Thanks to Mr. Dicker for this amazing story.
En lire plus
3 personnes ont trouvé cela utile
Utile
Signaler un abus
Traduire les commentaires en Français

Pdotg
1,0 sur 5 étoiles Tedious - the second worst book I've had to read!
Commenté au Royaume-Uni le 14 septembre 2018
Achat vérifié
I struggled through this tedious thriller/romance, hoping to find something good to say about it at a reading group meeting. It's a book about a book about a book, with another book thrown in near the end. Over-egged is the description that springs to mind - too many characters, too many suspects, too many arrests, too many twists in the plot, too much jumping around in time. The dialogue is juvenile, characters one-dimensional and the "famous" love story has no depth. I can't understand why this book has so many rave reviews. Perhaps it's better in the original French version?
En lire plus
44 personnes ont trouvé cela utile
Signaler un abus
Traduire les commentaires en Français

Cheryl M-M
5,0 sur 5 étoiles Riveting until the last word
Commenté au Royaume-Uni le 8 août 2018
Achat vérifié
This book has been adapted into a TV mini series and is soon to be released in the UK. I loved it, and can’t wait to see if they do the book justice.
Marcus is a one-hit wonder author who is suffering from a severe case of writer’s block. He reaches out to his old mentor, who is also a successful author, to ask for help. Harry Quebert is still swimming on the waves of the success of his own novel, The Origin of Evil, and has been for the last thirty years.
In a way this is the story of the spell of a Lolita on an entire town, and yet at the same time also the story of the innocence of a child being abused.
Nola captivates the men in her vicinity and certainly manages to ensnare Harry. The relationship between them grows into an obsession for both, which ends with the disappearance of Nola and the murder of the woman trying to help her.

When Nola’s body is found on Harry’s property his whole narrative about the last thirty years is thrown into doubt. Did he kill her to keep her quiet? Did someone bury her there to frame Harry?
Marcus finds himself drawn into the quest to prove Harry innocent, but what he learns along the way threatens his life, his career and his faith in his dear friend.
About a quarter into the book I knew what Harry was hiding. Not the who per se, but definitely the what. A scene that takes place in Nola’s house just opened my eyes to the meaning behind the words and the advice Harry gives to Marcus.
Even as the plot unravels slowly Dicker keeps on hitting the reader with reveal after reveal. The safe small town aura gives the scenario a realistic feel and the read is riveting until the very last word. It is a frightening look behind the closed doors of a supposedly quiet town.
En lire plus
23 personnes ont trouvé cela utile
Signaler un abus
Traduire les commentaires en Français

KC Perkins
1,0 sur 5 étoiles Inept
Commenté au Royaume-Uni le 16 février 2019
Achat vérifié
A whirlpool of of stereotypes, the linguistic sophistication of a ten year old's term paper and the psychological depth of a newspaper's classifieds section. The characters are unidimensional and the author is unable - or unwilling - to establish credible motivation for their actions. The love story is a collection of platitudes. There are at least 10 points at which the book could, and should have ended; instead it follows a downward spiral to the inevitable anti-climax.
I shudder at the thought that this book was considered for the Prix Goncourt. French language literature must be hitting rock bottom. Domage!
En lire plus
18 personnes ont trouvé cela utile
Signaler un abus
Traduire les commentaires en Français

Bookliterati
5,0 sur 5 étoiles A compelling and intriguing read
Commenté au Royaume-Uni le 10 septembre 2018
Achat vérifié
For book lovers The Truth About The Harry Quebert Affair is an ideal read as it is a book about a book about a book.  Marcus Goldman, author and protégé of the famous author Harry Quebert, is the narrator of this book.  We follow him from having had a very successful debut novel, to having writers block, to writing another bestseller about a murder that happened thirty three years ago and where the main suspect is none other that his friend and mentor Harry Quebert.  What is interesting is that the chapters go backwards, from chapter thirty one  to one  which reflects how the story unfolds, gradually going backwards to find out what really happened to Nola Kellergan.

The Truth About The Harry Quebert Affair is one of those books that felt familiar and comfortable from the first page.  Joël Dicker's writing flowed with ease, instantly drawing me into the story and the lives of the characters.  The narrative takes in the events of thirty three years ago, the summer of 1975, when Nola Kellergan went missing and the present where Marcus Goldman, with the help of Sergeant Gahalwood, looks into Nola's murder with the aim of proving Harry's innocence and finding the real murderer. Of course there are many different twists and turns in this book ,and not everything is at it seems in the sleepy town of Somerset New Hampshire or with its residents.

There are  a wonderful cast of characters in this book, many of whom are hiding secrets and not happy with their lot in life.  There is very much the small town mentality in Somerset, those with self importance, those who gossip about others lives to hide the disappointment of their own, but all don't seem to be able to see what is going on under their noses, or are burying their heads in the sand.  Harry Quebert is an interesting character, you can't get away from the fact that he was in his thirties and having a relationship with a fifteen year old girl, which is wrong, but there was a love story there. Harry never married or moved from his house incase Nola came back to find him.  The love story is touching, but at the same time a bit sinister, but I still had sympathy for Harry for losing what was the love of his life and being accused of her murder.  Marcus is between a rock and a hard place with his publisher, and finds himself writing the book about what really happened to Nola.  He is dogged in his approach, and through him there is revelation, after revelation and the plot goes on many different tangents it leaves you in a spin and never quite sure what is true or where the investigation is going. There is also an interesting subtext on what it means to be a great author and what makes a masterful piece of fiction.

The Truth About The Harry Quebert Affair is an intelligent crime thriller, with added humour, that held my attention throughout.  The intricate plot, the fascinating characters and the fast paced murder investigation make this a riveting and at times shocking read. The translation from the original French didn't seem to loose the atmosphere or nuances  of the plot and characters which can sometimes be lost.  This hugely entertaining and gripping read that will captivate you until the final verdict; a breathtaking debut novel.
En lire plus
14 personnes ont trouvé cela utile
Signaler un abus
Traduire les commentaires en Français

mosaic
3,0 sur 5 étoiles A bit of a marmite book
Commenté au Royaume-Uni le 18 février 2019
Achat vérifié
You can see from the reviews that this is a bit of a marmite book. It is true that in places it is tedious, drawn-out and full of repetitions. In other places I thought it was genius. I actually appreciated the humour in it with genuine laugh-out-loud moments, though it is also true that sometimes the humour seemed misplaced and random, as if the author couldn't decide whether this was a satire or a serious thriller. It is a very readable book and I don't think the translation interferes with its readability. However, in some places I had the distinct feeling that the author forgot what we had been told before and we end up with duplicate parts of the same story from the same angle with no new information whatsoever. I must admit I only bought the book because of the film hype, but I did not regret reading it.
En lire plus
11 personnes ont trouvé cela utile
Signaler un abus
Traduire les commentaires en Français
Afficher tous les commentaires