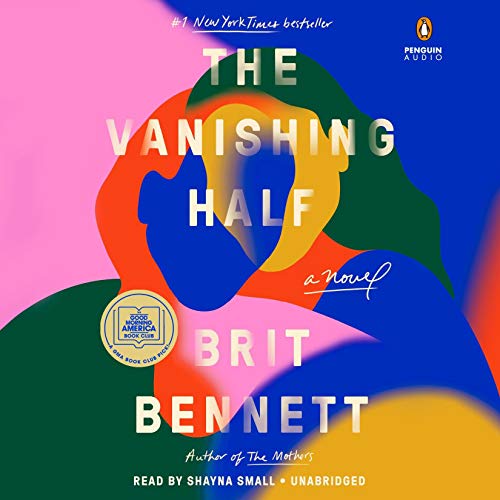 The Vanishing Half: A Novel

One of Barack Obama's Favorite Books of the Year

“A story of absolute, universal timelessness.... For any era, it's an accomplished, affecting novel. For this moment, it's piercing, subtly wending its way toward questions about who we are and who we want to be.” (Entertainment Weekly)

From The New York Times best-selling author of The Mothers, a stunning new novel about twin sisters, inseparable as children, who ultimately choose to live in two very different worlds, one Black and one White.

The Vignes twin sisters will always be identical. But after growing up together in a small, Southern Black community and running away at age 16, it's not just the shape of their daily lives that is different as adults, it's everything: their families, their communities, their racial identities. Many years later, one sister lives with her Black daughter in the same Southern town she once tried to escape. The other secretly passes for White, and her White husband knows nothing of her past. Still, even separated by so many miles and just as many lies, the fates of the twins remain intertwined. What will happen to the next generation, when their own daughters' storylines intersect?

Weaving together multiple strands and generations of this family, from the Deep South to California, from the 1950s to the 1990s, Brit Bennett produces a story that is at once a riveting, emotional family story and a brilliant exploration of the American history of passing. Looking well beyond issues of race, The Vanishing Half considers the lasting influence of the past as it shapes a person's decisions, desires, and expectations, and explores some of the multiple reasons and realms in which people sometimes feel pulled to live as something other than their origins.

As with her New York Times best-selling debut The Mothers, Brit Bennett offers an engrossing pause resister about family and relationships that is immersive and provocative, compassionate, and wise.

WritingMachine
3,0 sur 5 étoiles Very promising, but…
Commenté en France le 2 septembre 2021
Achat vérifié
Somehow there was a profound and intimate story on race issues pertaining to passing and the lives of the twins which got diluted and flooded by LGBTQ matters which are totally irrelevant to the core of the story. Or are they? Brit Bennett would have you believe they’re not even though, in my opinion, trans matters are NOT similar to race matters despite what popular media would have you believed. Here, the author made the mistake of confusing the two which totally messed the storyline up. A shame.
En lire plus
2 personnes ont trouvé cela utile
Utile
Signaler un abus
Traduire les commentaires en Français

Catia Santos
3,0 sur 5 étoiles The book did not live up to it's hype
Commenté en France le 5 mars 2021
Achat vérifié
I saw a lot of people raving about it and I also wanted to read it because it won the Goodreads Choice Awards, but it wasn't for me.
Not that I found anything really wrong with it, but I also didn't love it.

It's an interesting story and I got to learn bout the concept of "passing" which I didn't knew existed at all, but being a book more focused on the story of each character and the way they all connect I found it pretty slow. I kept waiting for something big to occur, some drama to spice things up but that never came.

I also didn't really connect to the characters as I hoped to. I think that a lot more could have been done.
I was more invested in the stories of Desire and Jude, I wanted to learn more about Desire's life in Mallard, and I was also very curious about Jude's relashionship with Reese, but at some point the story started being more focused on some of the other characters and both of those were in the back burner.

I do think the topics of the book are very important and interesting and they are nicely explored in the book.
En lire plus
Utile
Signaler un abus
Traduire les commentaires en Français

sadaoui
1,0 sur 5 étoiles Disappointed
Commenté en France le 3 décembre 2021
Achat vérifié
At first i found the story about the twins interesting, and it was one of the reasons that made me brought the book. Actually, the story turned to be another subject, which the author doesn't mentioned. I'm disappointed.
En lire plus
Utile
Signaler un abus
Traduire les commentaires en Français

Every great novel should force you out of your comfort zone, introduce you to new worlds and make you pause to think and assess. The Vanishing Half manages this, it feels, with ease. Brit Bennett achieved this with The Mothers too (which I also loved and is a MUST-read), but here the cast, the setting and the timeline are even more expansive. Thus the skill on display, even more impressive.

This is a novel that weaves the themes of history, memory and identity. It encourages us to put aside simplified notions of racial dynamics, and as a mixed-race woman, I found myself deeply interrogating my own thoughts, beliefs and experiences. This is not, though, only a novel about race and it would be disingenuous to believe so. This is a journey through family ties, belonging and loss; of individuals, couples, communities. Seamlessly bringing together these myriad threads is the sign of a masterful writer.

Brit writes with unpretentious flair, in a way that envelopes you softly, almost as though you're hearing your mum telling you the story as her mum told it to her. No word is wasted, no sentence is filler, no dialogue is superfluous. Everything serves its purpose exquisitely and is imbibed with feeling.

This novel spans the full emotional spectrum, it brought me moments of sadness, anger, and tender delight, all of which I am truly grateful for. I needed this novel right now - and I believe many of us do. Please, do not hesitate to purchase this book.

edbusa
1,0 sur 5 étoiles The story was not centered on the Twin sisters!!!
Commenté aux États-Unis le 25 juin 2020
Achat vérifié
This is clearly a case off false advertising. I expected the book to convey a story on the dynamics identical twins raised in the racist south. THIS WAS NOT THE CORE OF THE BOOK. Instead it focused on the dynamics of the LGBTQ community. I have absolutely no interest in such matters. Thoroughly disappointed.
En lire plus
895 personnes ont trouvé cela utile
Signaler un abus
Traduire les commentaires en Français

Daniel S
5,0 sur 5 étoiles The Road Not Taken
Commenté aux États-Unis le 3 juin 2020
Achat vérifié
This book is about choices and circumstance. It tells the story of twin girls growing up in the segregated South. They live in a town that is colorstruck inhabited by light skinned black people. Both sisters, in their own way, rebel against the strictures of the town They run away as teenagers and wind up rebelling in very different fashions. One sister marries an extremely dark skinned man and has a dark skinned daughter. The other sister passes for white and lives a privileged life. Their stories...and the backstories of their forebears is told over a span of almost forty years, beginning in the 1950s. The novel has an arresting narrative and focuses on the choices people make, the secrets they hold and the consequences that unfold from this dynamic.
En lire plus
701 personnes ont trouvé cela utile
Signaler un abus
Traduire les commentaires en Français

Ralph Blumenau
3,0 sur 5 étoiles Problems of racial and gender identity
Commenté au Royaume-Uni le 19 juillet 2020
Achat vérifié
The first three quarters of the book are excellent. They tell of the lives of twin sisters, Desiree and Stella, who were born in the fictional Louisiana town of Mallard, where the population of African-Americans were all light-skinned and looked down on dark skinned people.

This had not prevented whites from a neighbouring town from lynching their father for an imagined racial transgression.

In 1964 Desiree and Stella ran way to St Louis. But they soon went their separate ways. Stella, traumatized by having seen her father lynched, had decided to pass as white. She had taken a job in St Louis. Her employer, a wealthy white banker called Blake Sanders had taken a liking to her, and she to him; and when he was moved to Boston and asked her to go with him, she had agreed, and had simply walked out on Desiree without telling her where she had gone. There she married him and bore him a white daughter, Kennedy. Neither Blake nor Kennedy knew that she was not white. Later they moved to Los Angeles.

For years Stella had no contact with Desiree. She was always terrified that she would be found out, and avoided any contact with black people. The exception was her friendship for a while with Loretta Walker, a black woman who lived in the house opposite hers; but this ended when Kennedy, playing with Loretta’s daughter Cindy, made a racist comment to Cindy.

Desiree had gone to Washington D.C, and married a black man, Sam Winston, and bore him a black daughter, Jude. But Sam was violent towards Desiree, and she and Jude left him and returned to Mallard in 1968.
In 1982 Jude was living in Los Angeles with Reese Carter, a transgender man with whom, sharing his bed, she has an affaire of sorts, and with Barry, who performs as a drag queen twice a month. Reese and Barry, like Stella, were passing for something they were not.

One day, Jude thought she had seen Stella, the lookalike of her mother; and she also met Kennedy.
Kennedy had become a rebel, had dropped out school, and against her mother’s wishes, had taken up acting in a crummy play in a crummy theatre. Jude took a job as a dogsbody at the theatre in order to see more of her cousin and in the hope of meeting Stella. On the last night of the show she did meet Stella, and introduced herself to her as Desiree’s daughter. Stella froze, then walked away. Angrily, Jude told Kennedy that their mothers were twins, and that Stella had been lying to Kennedy all her life.

The secret was out: Stella knew she had been rumbled, and Kennedy knew the truth.

I found the remaining quarter of the book, dealing in part with the consequences of this situation, very confusing. Hence only three stars, when so much of the book deserves five.
En lire plus
37 personnes ont trouvé cela utile
Signaler un abus
Traduire les commentaires en Français

J. Baker
2,0 sur 5 étoiles Disappointing. Weak characters. Unanswered plot lines
Commenté aux États-Unis le 25 juin 2020
Achat vérifié
The premise of the story about the twins lives got lost in many pages of LGBTQ trans issues. It was like there was not enough going on with the sisters lives, the author felt it necessary to throw this red herring into the story. And I don’t say plot because it was not part of the plot. I was very intrigued about the lives of the sisters, but I got no satisfaction of what made them what they were. They just moved from one day to the next like they could not take charge of their lives. They each suffered a malaise that was similarly experienced but the author was too lazy to explore it. Ending was unsatisfying and abrupt.
En lire plus
610 personnes ont trouvé cela utile
Signaler un abus
Traduire les commentaires en Français
Afficher tous les commentaires
Retour en haut
Pour mieux nous connaître
Gagnez de l'argent
Moyens de paiement Amazon
Besoin d'aide ?
© 1996-2022, Amazon.com Inc. ou ses affiliés