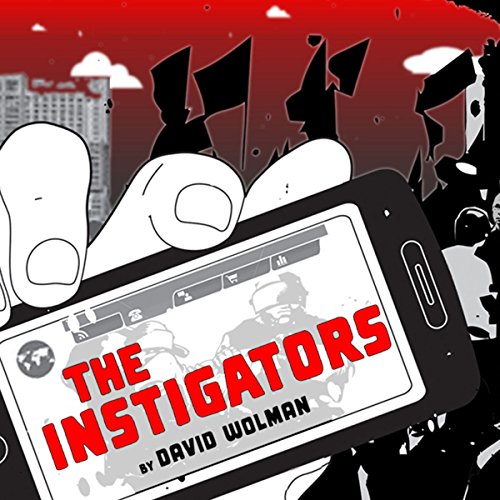 In 2008, a small band of political activists in Egypt led by a young engineer named Ahmed Maher began organizing on Facebook under the moniker April 6 Youth. Dodging the secret police both online and off, they built a Web page into a movement. Then, in January 2011, they helped architect a final showdown with the country's dictator. David Wolman unspools the riveting behind-the-scenes story of these daring activists and how they planted the digital seeds of a revolution.

Award-winning journalist and author David Wolman is a contributing editor at Wired, a former Fulbright journalism fellow and a winner of the 2011 Oregon Arts Commission individual artists fellowship. He is the author of two works of nonfiction. His third book, The End of Money, will be published in February.

vandolicious
5,0 sur 5 étoiles The Power of FB
Commenté aux États-Unis le 7 mai 2012
Achat vérifié
In David Wolman's "The Instigator," one can observe from this single the power of media and the powers that Facebook held in relations to the revolution in Egypt. I must say the title of this piece was especially intriguing. The entire time I read the single, I kept a skeptic mind, waiting to be deceived by the notion of an instigator.

In the technological age, media is a strong power that one can use. At the same time, its powers are still at an unknown because it is hard to determine where our technological developments will take us (lecture). Even the successful members of the media cannot anticipate the success of failure of the product they are producing (guest speaker & webcammers). The Facebook group, April 6 Youth, started by Maher and Israa Abdel-Fattah resembles sociology studies about degree of separation and one's ability to spread a message through each other's acquaintances. This notion is simply in theory, but the success in practice really depends on the cooperation of one's connections.

In this particular situation, the cause was something important enough for people to involve themselves in. Not only were the participants asked to join the group, but they changed their profile pictures as well, to show their affiliation and advertise for the group. The strength and sense of community behind this movement drove it to victory as the revolution overthrew the Egypt government to create a better homeland for themselves.
En lire plus
Signaler un abus
Traduire les commentaires en Français

Betty L.
5,0 sur 5 étoiles Seeing the internet with improved eyes
Commenté aux États-Unis le 7 mai 2012
Achat vérifié
David Wolman's "The Instigators" is a great read and I thoroughly enjoyed it. The character of Ahmed Maher is so completely sympathetic, especially because he is humble and doesn't have delusions that he is some modern day Moses. It's a remarkable story and makes me look at social media like Facebook and Twitter with new eyes. Many young people of today want nothing to do with politics and reading about this successful effort to mobilize such a great mass of said young people using the internet and non-violent protest is just wonderful. The internet is such a great tool but most people squander it with rather meaningless activity. However, as the internet and the technology that indorses it advance, its potential is as close to limitless as you can get.

In technical terms, this story is very well-written. Wolman includes a lot of quotations not only from speech but also from online and text message conversations, which serves to stress the importance of the internet in today's world. Wolman also occasionally inserts himself into the story, making it a more personal story. Wolman's support of and admiration for Maher and his movement is obvious and the little skeptic in me wants to bud in, but I love this story so much, skeptical me won't get to say anything today.
En lire plus
Signaler un abus
Traduire les commentaires en Français

bwebbjr
5,0 sur 5 étoiles Social or revolutionary networking?
Commenté aux États-Unis le 13 mai 2011
Achat vérifié
On February 11, 2011 after nearly 30 years as the President of Egypt and also after 18 days of demonstrations against his regime, President Mubarek resigned. What few people realized at the time was that the flames of revolution had been fanned since 2004 if not earlier by people like Ahmed Maher and Wael Ghonin. This fascinating Kindle Single tells the story of the conception, birth and execution of a revolution.

What is interesting in this short read is understanding the key role social media, social networking, bloggers, microbloggers and the virtual world played through the use of digital tools like Facebook, blogs, e-mail, Yahoo chat, Twitter, Google Earth, online groups/forums, Google Docs, Gmail, etc. in conceiving a revolution. And even in the midst of that virtual world, a war was being waged between those leading the revolution and the Egyptian security officers intent on infiltrating and derailing it.

However it wasn't until the online organization bridged over into effective street organization as well that a revolution was born. The martyrdom of over 800 men and woman, the arrests, the beatings and Egypt's last ditch effort to strangle the revolution by cutting off Internet access and cellular service - all only served to strengthen the revolution and finally bring about the resignation of President Mubarek.

`The Instigators' shares an interesting story of the revolution in Egypt. But it also reveals to us all how real change is being orchestrated throughout the world today and will be orchestrated in the years to come with the help of social media and social networking tools.

Ethan D. Simon
5,0 sur 5 étoiles A Tale of Revolution with the Medium of Social Media (by Hannah LJ Digital)
Commenté aux États-Unis le 7 mai 2012
Achat vérifié
In his piece,"The Instigators," David Wolman begins with the release of Wael Ghonim, an executive at Google and a prominent figure in the A6Y Revolutions. Wolman establishes Ghonim's relationship with Ahmed Maher, a soft-spoken engineer - our hero. Wolman continues with Maher's story of humble beginnings, a failed medical student turned engineer (a career he then made the most of). Maher is depicted as a justice seeker, a likeable guy who enjoyed comic books and sci-fi, a hero who recognized injustice within his field of engineering. Wolman percieves Maher's herosism which is articulated through Maher's defeat from beatings and capture. It is said that Maher told his mother he was sore from sleeping wrong, when he was really detained and tortured by the Egyptian government.

The piece transgresses to a story of social media, where an underground movement of revolution is born on a very high publicity scale - that of Facebook. With talk of tweets, and secret hashtags, mangled face photos of the beaten, the revolution of A6Y is a true tale of rebellion that has no place other than the 21st century; where internet black outs are no feat for justice. "The Instigators" proves that justice has no bounds with the simple use of a facebook profile.
En lire plus
Signaler un abus
Traduire les commentaires en Français

Jules
5,0 sur 5 étoiles Revolution unfolds through social media.
Commenté aux États-Unis le 7 mai 2012
Achat vérifié
In `The Instigators", David Wolman takes the reader on a journey through the process of the movement that toppled the Egyptian government and sparked a revolution. Ahmed Maher is the shy and soft spoken protagonist who sets off the passion for democracy and civil rights in the citizens of Cairo. The humble Maher is a justice seeking individual who, despite beatings from the Egyptian government and the threats he received for the formation of a peaceful government protest, continued to mobilize Egyptian civilians. The story takes the reader behind the scenes of what seemed like an overnight revolution. Living in a globalized world, we take for granted the fact that the internet can provide limitless opportunities for connecting with fellow human beings and making changes that will cross the boundaries of the online community. Wolman effectively portrays the difficult and precise planning that it took to organize and mobilize a group of civilians, taking the reader from the Facebook page of April 6 Youth, filled with thousands of supporters, to the actual formation of a peaceful march to Tahrir Square. Wolman's story brings the social media revolution out from under the veil of secrecy and tells the adventurous, yet dangerous tale of a few justice seeking individuals that brought down the oppressive government.
En lire plus
Signaler un abus
Traduire les commentaires en Français
Afficher tous les commentaires