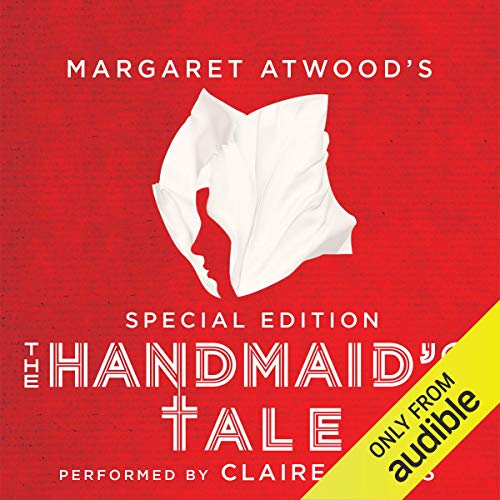 "Are there any questions?" The final line in Margaret Atwood's modern classic, The Handmaid's Tale, has teased and perplexed fans since the book's original release more than 30 years ago. Now, in this Audible Original production, listeners get some of the answers they've waited so long to hear.

Featuring an all-new interview with Professor Piexoto, written by Atwood and performed by a full cast, The Handmaid's Tale: Special Edition is a must-listen for both fans and newcomers alike. Emmy Award winner Claire Danes (Homeland, Temple Grandin) gives a stirring performance of this classic in speculative fiction, where the message (and the warning) is now more timely than ever. In addition to rich sound design that honors the audio origins of Atwood's classic, the special edition also includes a brand-new afterword from the author and an essay written by author Valerie Martin (Mary Reilly, Property).

After a violent coup in the United States overthrows the Constitution and ushers in a new government regime, the Republic of Gilead imposes subservient roles on all women. Offred, now a Handmaid tasked with the singular role of procreation in the childless household of the enigmatic Commander and his bitter wife, can remember a time when she lived with her husband and daughter and had a job, before she lost everything, even her own name. Despite the danger, Offred learns to navigate the intimate secrets of those who control her every move, risking her life for mere glimpses of her former freedom, and records her story for future listeners.

Whether you're a fan of the original novel or someone who has recently discovered it, The Handmaid's Tale: Special Edition will shock, impress, and satisfy all those who listen.

CalenderGirl
5,0 sur 5 étoiles The Handmaid's Tale
Commenté au Royaume-Uni 🇬🇧 le 10 août 2018
Achat vérifié
What an incredible book. Somewhat unbelievable in some ways, but very much believable as it could happen, in the worst scenario ever (look at what's happening today). It could be reality, it could be women's worst nightmare. I haven't seen the TV programme, only read the original book, so no idea how the writer's have progressed this story for TV. It left a mark on me, it opens your mind as to how women have been treated over time and how we are considered a 'lesser person vs men'. Disturbing book, but very thought provoking. Very.
En lire plus
143 personnes ont trouvé cela utile
Signaler un abus
Traduire les commentaires en Français

Mariya Georgieva
1,0 sur 5 étoiles Degrading to women
Commenté au Royaume-Uni 🇬🇧 le 27 janvier 2019
Achat vérifié
This book was recommended to me by many women and was listed in several Must-reads for women. I had great expectations and yet this is one of the very few books, which I just couldn't finish no matter how hard I tried. I have never read something more stupid and degrading to women (maybe only comparable to "50 shades of grey" in shallowness). Writing style... well with all my respect to the famous Ms Atwood, it is strained and presumptuous, and the narration is slow and boring.
En lire plus
112 personnes ont trouvé cela utile
Signaler un abus
Traduire les commentaires en Français

JB
5,0 sur 5 étoiles Don’t expect a transcript of the TV program
Commenté au Royaume-Uni 🇬🇧 le 29 mai 2018
Achat vérifié
Not my usual read. But read on the recommendation of a friend . Don’t expect the script of the TV series the book is much much better.Margaret Atwood uses words to spin a tale in which you get entangled. I really didn’t want to put it down, even though I watched it on TV and knew the story. I would and have recommended this book to friends not as a vintage classic but as a must read classic
En lire plus
118 personnes ont trouvé cela utile
Signaler un abus
Traduire les commentaires en Français

emmaclare1810
5,0 sur 5 étoiles Masterclass in dystopia
Commenté au Royaume-Uni 🇬🇧 le 6 août 2017
Achat vérifié
This book is amazing. It has been my favourite novel for fifteen years since I read it for A Level. I'm now an English teacher and every year I buy more copies than I'd like to admit to give to students. It is, in my opinion, the perfect dystopian novel: fiction that's just close enough to reality to scare the living daylights out of you.
En lire plus
122 personnes ont trouvé cela utile
Signaler un abus
Traduire les commentaires en Français

Slowcoach
1,0 sur 5 étoiles One of the most boring books I've ever read
Commenté au Royaume-Uni 🇬🇧 le 28 septembre 2018
Achat vérifié
Total and absolute pretentious rubbish. Endlessly boring with no coherent plot of any substance. The author is no Aldous Huxley. I am sorry I wasted my money buying this and even more sorry I wasted my time reading it.
En lire plus
66 personnes ont trouvé cela utile
Signaler un abus
Traduire les commentaires en Français
Afficher tous les commentaires