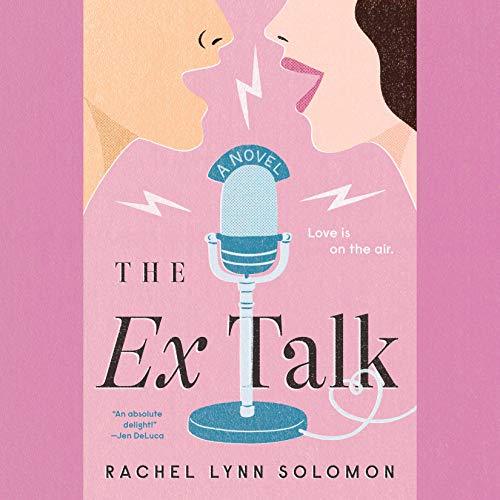 Shay Goldstein has been a producer at her Seattle public radio station for nearly a decade, and she can't imagine working anywhere else. But lately it's been a constant clash between her and her newest colleague, Dominic Yun, who's fresh off a journalism master's program and convinced he knows everything about public radio.

When the struggling station needs a new concept, Shay proposes a show that her boss green-lights with excitement. On The Ex Talk, two exes will deliver relationship advice live, on air. Their boss decides Shay and Dominic are the perfect cohosts, given how much they already despise each other. Neither loves the idea of lying to listeners, but it's this or unemployment. Their audience gets invested fast, and it's not long before The Ex Talk becomes a must-listen in Seattle and climbs podcast charts.

As the show gets bigger, so does their deception, especially when Shay and Dominic start to fall for each other. In an industry that values truth, getting caught could mean the end of more than just their careers.

RhiannonNewcombe
5,0 sur 5 étoiles Incredible
Commenté au Royaume-Uni 🇬🇧 le 3 juillet 2021
Achat vérifié
In this enemies to lovers read we follow the life of Shay Goldstein, radio producer. Radio is everything to Shay and her dream is to be on air. Which is why when cocky Dominic Yun rocks up, flashing his fancy degree and getting air time he instantly becomes the enemy. In a series of events these two somehow end up cohosting their own show, however, to do so they are having to pretend to be exes. What could possibly go wrong?

I LOVED this book. Is it possible to give a book a five star review purely because of the amount of Buffy the Vampire Slayer references? No? Well it’s also incredibly well written, absolutely hilarious and filled with the glorious enemies to lovers sexual tension. What I also really liked about this book was the acknowledgement of loss and grief, as someone who recently lost a parent I felt I really related to Shay and her struggles. Can't recommend enough.
En lire plus
Signaler un abus
Traduire les commentaires en Français

Charlotte
4,0 sur 5 étoiles Sweet and funny read
Commenté au Royaume-Uni 🇬🇧 le 18 août 2021
Achat vérifié
"My hand slips on my laptop, and I accidentally hit the like button. On a really old photo of him and his ex-girlfriend. The only rational solution is to set myself and my laptop on fire."

Loved the banter and relationship between Shay and Dominic. First of all you totally dislike the guy cause he'll tell you all about his Masters and can't stop dropping it into conversations (zzzz) so you think 'great he's a know-it-all' *eye-roll* but when Shay has to work with him the banter between the two really opens up and you realise he's just insecure about everyone around him with their experience - awww.

Basically settle down with a cup of tea and enjoy their insecurities, steam, and romance.
En lire plus
Signaler un abus
Traduire les commentaires en Français

SMacDonald
4,0 sur 5 étoiles Ex-perimental with enemies to lovers
Commenté au Royaume-Uni 🇬🇧 le 17 décembre 2022
Achat vérifié
Jumping on the popular enemies to lovers bandwagon, i can see why this book worked. However, there was a disparity between the two main characters; it kept being mentioned that they were about 5 years apart in age. Why should that matter? Unless it was a 25 year age gap then i'd be worried but there wasnt a need to keep mentioning their ages over and over again. Also some of the romantic scenes were a little OTT. A good read but needed more depth.
En lire plus
Signaler un abus
Traduire les commentaires en Français