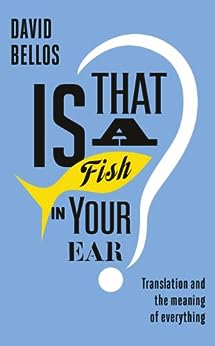 Is That a Fish in Your Ear?: Translation and the Meaning of Everything (English Edition) Format Kindle

In the guise of a book about translation this is a richly original cultural history ... A book for anyone interested in words, language and cultural anthropology. Mr Bellos's fascination with his subject is itself endlessly fascinating (The Economist)

For anyone with a passing interest in language this work is enthralling ... A wonderful celebration of the sheer diversity of language and the place it occupies in human endeavour. Conducted by a man who clearly knows his stuff, it is a whirlwind tour round the highways and byways of translation in all its glorious forms, from literary fiction to car repair manuals, from the Nuremberg trials to decoding at Bletchley Park (The Scotsman)

Bellos has numerous paradoxes, anecdotes and witty solutions ... his insights are thought provoking, paradoxical and a brilliant exposition of mankind's attempts to deal with the Babel of global communication (Michael Binyon The Times)

[A] witty, erudite exploration...[Bellos] delights in [translation's] chequered past and its contemporary ubiquity...He would like us to do more of it. With the encouragement of this book, we might even begin to enjoy it (Maureen Freely Sunday Telegraph)

Is That A Fish In Your Ear? is spiced with good and provocative things. At once erudite and unpretentious...[it is a] scintillating bouillabaisse (Frederic Raphael Literary Review)

Is That A Fish in Your Ear? by David Bellos (father of Alex of Numberland fame) is a fascinating book on the world of translation that might well be this year's Just My Type (Jonathan Ruppin, Foyles Booskhop)

A fascinating...very readable study of the mysterious art and business of translation...Bellos asks big questions...and comes up with often surprising answers...sparky, thought-provoking (Nigeness)

Forget the fish-it's David Bellos you want in your ear when the talk is about translation. Bellos dispels many of the gloomy truisms of the trade and reminds us what an infinitely flexible instrument the English language (or any language) is. Sparkling, independent-minded analysis of everything from Nabokov's insecurities to Google Translate's felicities fuels a tender-even romantic-account of our relationship with words. (―NATASHA WIMMER, translator of Roberto Bolaño’s Savage Detectives and 2666)

David Bellos is the director of the Program in Translation and Intercultural Communication at Princeton University, where he is also a professor of French and comparative literature. He has won many awards for his translations of Georges Perec, Ismail Kadare, and others, including the Man Booker International Translator's Award. He also received the Prix Goncourt for George Perec: A Life in Words. He is the author of the book Is That a Fish in Your Ear? Translation and the Meaning of Everything. --Ce texte fait référence à l'édition paperback.

I bought it for present so I didn't actually read it.
Only thing I can say is this is an actual book. Unlike the cover, there is no drawings or graphic design to illustrate some points and idiomatic expressions explained in his pages.

NJ
2,0 sur 5 étoiles Fails to live up to its reviews
Commenté au Royaume-Uni le 24 décembre 2017
Achat vérifié
Am I missing something? Or am I the boy in the Emperor's New Clothes?

I make my living as a translator and I used to teach English at university level. So this book ought to have appealed to me, especially if the fulsome reviews are to be believed. But I found it just dull. Bellos writes like an academic and that is not a compliment. There are places - many places - where my brain just clouded over, either from information overload (as in the details of systems at the ECJ and UN), or from what I found the plodding nature of the prose.

There are many things known to all translators but not to the general public that pass unmentioned. For instance, Bellos notes that most translation is done into the translator's "mother tongue". But he doesn't say why - and any commercial translator will tell you that the problem is rarely understanding the original (what else are dictionaries and contacts for?) but working out how to express it naturally in the target language (for which Google comes in useful). And he never mentions that the most important factor in whether a text is hard or easy to translate is not the content but the quality of writing in the original (grammaticality, sentence structure, word usage, etc.). Difficult stuff written well just requires work. Easy stuff written badly is always a headache, because written badly almost invariably means ambiguity. Bellos is presumably luckier than the rest of us in getting good texts to translate.

He also gets literary texts, and talks a lot about them. This may be interesting for the general reader but it has very little to do with how most of us make our living.

There's also some very curious stuff presented, almost, as established fact. For instance, while Bellos is right to point to the way that language is a very significant factor in establishing social identity, it is surely going way beyond justification claiming, as he does, that this is the main function of language and the main driver of its origins.

There's no reason to doubt the sincerity of the ranks of critics and reviewers. If they enjoyed this book, then that's great. But plainly I didn't. And that comes from someone from within the trade. There's no reason why someone shouldn't be able to produce a good book about translation for the general reader, but this one didn't do it for me.
En lire plus
13 personnes ont trouvé cela utile
Signaler un abus
Traduire les commentaires en Français

therealus
5,0 sur 5 étoiles Informative and entertaining
Commenté au Royaume-Uni le 27 juin 2013
Achat vérifié
Those of us with a suspicious, cynical or just plain realistic view of the world will undoubtedly have pondered the veracity of the translated texts they read and the translated speech they hear or read. In many foreign films they will often be reflecting on the amount of time it takes the speaker to say apparently not very much. If they have even a basic grasp of the language being spoken they will know there are some words that are not mentioned in subtitles, and will be puzzled by the content of the translation itself, to the point of vehement disagreement.

Sometimes the source text, for example the original Hebrew bible, is in a form wide open to interpretation, with no lower case letters, word spacing or punctuation: whole wars have been fought over the positioning of a comma in the Old Testament. Sometimes the original meaning of a word, despite the supposed handing down of meaning orally by clerics, is completely lost: David Bellos here tells us that nobody actually knows the meaning of "cherubim", for example, and it has therefore had to be inferred.

These and many other themes related to translation are addressed by Bellos in this informative and entertaining volume. He examines the history of translation, in the process tracing the word back to its roots over 5000 years ago, and its politics, including the issues surrounding translation at international bodies such as the UN and EU, and the way a whole, powerful caste of translators emerged in Ottoman Venice. He looks at the way in which machines have been harnessed in various ways to act as translators, including Google's algorithm to use existing online translations, often using English as a pivot language, to enable new ones. He analyses the thorny issues of translated humour and, a particular bugbear of this reviewer, poetry or song, where often whole stanzas are rethought in order to preserve rhyme, but at the loss of meaning. He confirms the suspicion that advanced learners of a non-native language eventually cease to translate as they read, having reached an understanding that transcends translation. And he shows, using measures of their volumes, where the main efforts are in translation, giving a feel for where economic, political and cultural power lie internationally.

To his credit, Bellos does not compromise the seriousness of the subject. There is no attempt at gratuitous lightheartedness, although there is plenty of humour, or at dumbing down. As well as the mechanics of translation he addresses the more philosophical aspects, particularly the ethics of translation. That may have cost him some readers, but the book is stronger and more valuable for it.
En lire plus
Une personne a trouvé cela utile
Signaler un abus
Traduire les commentaires en Français

Clifford
5,0 sur 5 étoiles A Superb Book, Full of Delights
Commenté au Royaume-Uni le 11 mai 2013
Achat vérifié
The 'Hitch-Hiker's Guide' reference in the title suggests a jocular approach to the science and art of inter-Language translation, and Bellos maintains this light-hearted style as he tunnels deeply and extensively into its subject which proves to be one in which even the question of accuracy, and even of the possibility of translation itself are shown to depend on what we mean by accuracy and translation. Bellos' approach is both rigorous and firmly founded in the history of human communication, in all of its forms and intents, and it is entertaining. More than that, I feel it makes necessary reading for any who value the riches of language, and not just for the pedants who find the ability to share thoughts with precision. I should make it clear that I am no professional in language, merely an intrigued amateur, but for me, Bellos' progress towards his aims and objectives stands proudly alongside the books of the great Steven Pinker. I found but one unturned stone in his analysis, that of the translation of musical lyrics, particularly in the classical sphere, where source and destination texts may involve a biblical commonality that further complicates the prime requirement that the words must mellifluously fit the notes. A specialist probably deserving of a fleeting mention, certainly, and Bellos is easily forgiven its omission. An excellent book.
En lire plus
Signaler un abus
Traduire les commentaires en Français

Nemo
5,0 sur 5 étoiles Insightful and inspirational
Commenté au Royaume-Uni le 29 octobre 2012
Achat vérifié
I have just re-read this wonderful book (in the hardback edition) having first read it not long after it came out.
It is a beautifully written and thoughtful book for an interested lay person who has an interest in language. It deals with a very wide range of issues that arise when considering translation - from the practical to the philosophical - and does so in a way that gets you thinking beyond the many entertaining and interesting examples given. There is so much more to translation once you start to think about it.
And inspirational? Well it has to be an exceptional book that makes you revisit your schoolboy French.....