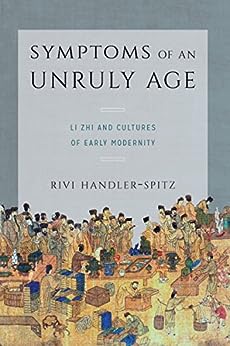 Symptoms of an Unruly Age compares the writings of Li Zhi (1527–1602) and his late-Ming compatriots to texts composed by their European contemporaries, including Montaigne, Shakespeare, and Cervantes. Emphasizing aesthetic patterns that transcend national boundaries, Rivi Handler-Spitz explores these works as culturally distinct responses to similar social and economic tensions affecting early modern cultures on both ends of Eurasia.

The paradoxes, ironies, and self-contradictions that pervade these works are symptomatic of the hypocrisy, social posturing, and counterfeiting that afflicted both Chinese and European societies at the turn of the seventeenth century. Symptoms of an Unruly Age shows us that these texts, produced thousands of miles away from one another, each constitute cultural manifestations of early modernity.

Rivi Handler-Spitz is associate professor of Chinese language and literature at Macalester College.