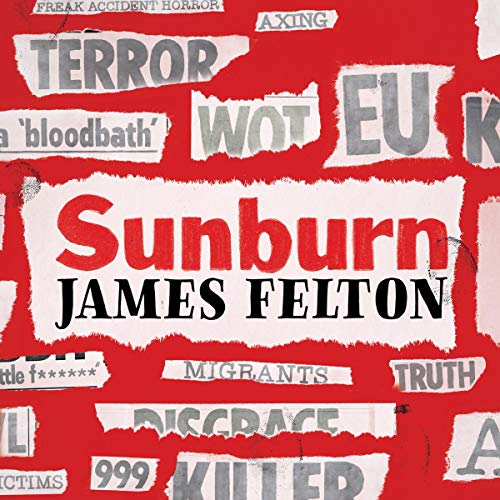 Sunburn: The Unofficial History of the Sun Newspaper in 99 Headlines

This book is for you if you dislike The Sun but have never actually read it to know why.

Using his famed on-the-nose commentary, Twitter legend James Felton has dissected 99 of the most outlandish stories The Sun (for a long time the biggest-selling British newspaper) has run since it became a tabloid in 1969, hoping to answer once and for all whether the press has reflected - or manipulated - the British people over the last 50 years.

Loubie Smith
5,0 sur 5 étoiles How did he choose only 99?
Commenté au Royaume-Uni le 10 octobre 2020
Achat vérifié
This book will make you question why The Sun is still in business, if you think you know the history...think again.

99 headlines that sum up the history of The Sun, with James Felton's witty explanations and funny comic style cartoons. From Migrants baking swans to Princess Di, no subject is taboo for the sun, making any old tosh into a story has been their cash cow for many years. Now we can see the best of the worst all in one book!

I've never been a fan of The Sun so this book appealed to me instantly, it confirmed everything I already knew. The Sun put selling papers first and then facts later.

I was incredibly shocked by stories like Aids being a hoax (oh yes, they definitely did) and the "Eastbenders" headline by Piers Morgan...more so than the ones from Katie Hopkins who you just immediately know to brace for some nasty nasty stuff.

This book will require a strong stomach because some of the views The Sun express in here are honestly pretty vile. Reading through your hands (as the book suggests) may be preferable for some...it gets pretty murky in The Sun's history.

James has done fantastic with this book, it's well written and incredibly funny in spite of the nasty bigoted views he has had to write about. I'm impressed how much research he put in and how well he documents everything, even adding in confirmations of the dates facts were checked, proving to people like The Sun that it really isn't that hard to check your facts and provide proof of them...sorry guys but you need to take some pointers here!

If you want an honest look at The Sun newspaper then buy this book, just keep in mind that no matter how insane some of these headlines sound...they are absolutely what The Sun printed!

Shona wilson
5,0 sur 5 étoiles Everyone should read this.
Commenté au Royaume-Uni le 11 octobre 2020
Achat vérifié
Absolutely brilliant. I’ve always known The Sun to be a cesspit however it really shines a light on how people can get away with saying or showing anything. It amazes me how many people still read the thing to be honest. It’s not worth the paper it’s printed on.
En lire plus
34 personnes ont trouvé cela utile
Signaler un abus
Traduire les commentaires en Français

Brian
5,0 sur 5 étoiles Infuriating and funny in equal measures.
Commenté au Royaume-Uni le 11 octobre 2020
Achat vérifié
James doesn't disappoint: his new book is meticulously researched and a scathing indictment of not only The Sun or the News of the World, but the standards and practices of tabloid journalism everywhere. And he does that with eloquence, wit and charm.

Anyway
5,0 sur 5 étoiles Important and funny - read this now
Commenté au Royaume-Uni le 12 octobre 2020
Achat vérifié
Brilliant. A long overdue critical look at the paper which has dominated much of the political agenda of the UK for decades. Felton has scoured for the most ludicrous of Sun stories, including those the paper would have us forget. Funny, compassionate and frightening. An unusually important book. Highly recommended
En lire plus
24 personnes ont trouvé cela utile
Signaler un abus
Traduire les commentaires en Français
Afficher tous les commentaires