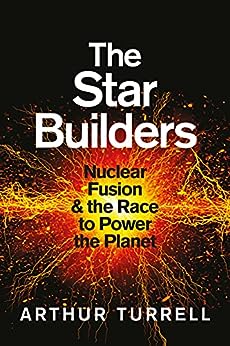 The Star Builders: Nuclear Fusion and the Race to Power the Planet (English Edition) Format Kindle

“A gobsmackingly good read…. Turrell’s portraits of the undaunted star-building scientists who are trying to make fusion a reality are not just compelling but, dare I say it, fun. I learned a lot by reading this book. You will, too.”
—Robert Bryce, author of A Question of Power: Electricity and the Wealth of Nations

“Visionary thinkers have sketched a future of sustainable abundance based on skillful use of nuclear fusion, the process that powers the stars.  Can we get there?  How?  When?  The Star Builders surveys this vibrant frontier of science and technology clearly and realistically.  It brings a timely, hopeful message.”
—Frank Wilczek, Winner of the Nobel Prize in Physics and author of Fundamentals: Ten Keys to Reality

“What I love about this book is how easily Turrell forgives us for having forgotten the promise of fusion.  He makes a convincing case that fusion could be the missing puzzle piece as we struggle to find the perfect complement for renewables. His enthusiasm brings decades of careful scientific research to life, even as the scientists whose work he traces bring fusion to the cusp of fruition."
—Gretchen Bakke, author of The Grid: The Fraying Wires Between Americans and Our Energy Future

“Incredibly readable and entertaining. The book’s first-hand accounts of what is occurring inside fusion startups are especially enthralling. Turrell skillfully tells the fascinating story of the personalities, science, and technology that have brought this fledging industry to the point of takeoff."
—Jason Parisi, coauthor of The Future of Fusion Energy

“Painstakingly researched.  Turrell gives us a front-row seat to the hard-fought race for fusion, and he offers convincing reasons for optimism. In fact, he shows us a galaxy of effort being directed toward ‘building a star.’”
—James Mahaffey, PhD, author of Atomic Adventures

Arthur Turrell has a PhD in plasma physics from Imperial College London and is the recipient of the Rutherford Prize for the Public Understanding of Plasma Physics. His research and writing has been featured in The Daily Mail, The Guardian, the International Business Times, Gizmodo, and other publications. He also works as a Senior Research Economist for the Bank of England where he is applying his scientific training to questions about the macroeconomy. He is the author of The Star Builders. --Ce texte fait référence à l'édition hardcover.