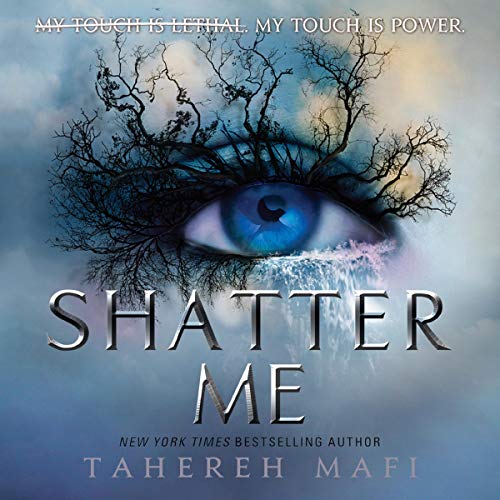 Shatter Me: Shatter Me, Book 1

X-Men meets The Handmaid's Tale in this first instalment in an epic and romantic YA fantasy trilogy perfect for fans of Sarah J. Maas, Victoria Aveyard's The Red Queen, Netflix's Stranger Things and Leigh Bardugo's Six of Crows.

A fragile young teenage girl is held captive. Locked in a cell by The Reestablishment, a harsh dictatorship in charge of a crumbling world. This is no ordinary teenager. Juliette is a threat to The Reestablishment's power. A touch from her can kill - one touch is all it takes. But not only is she a threat, she is potentially the most powerful weapon they could have....

Juliette has never fought for herself before, but when she’s reunited with the one person who ever cared about her, the depth of the emotion and the power within her become explosive.

Tahereh Mafi is the New York Times best-selling author of the Shatter Me series which has been published in more than 30 languages around the world. She was born in a small city somewhere in Connecticut and currently resides in Santa Monica, California, with her husband, Ransom Riggs, fellow best-selling author of Miss Peregrine's Home for Peculiar Children, and their young daughter. She can usually be found over-caffeinated and stuck in a book.

Ewe Linka
2,0 sur 5 étoiles Great preamble but would not continue the series
Commenté au Royaume-Uni le 5 septembre 2019
Achat vérifié
Let me start with the praise which is that I loved the cover and the story outline which seemed like the main character is going to make a stance and I will, by the end of the book, envy to be her and think 'wow' to then purchase the rest of the series.
That did not happen.
I did also like the unique idea of crossed out sentences to represent Juliette's mental state and repetition of words but these got quickly tiresome and therefore irritable.
I feel like not much has happened in the book, the characters were one dimensional and the 'romance' seemed fake. It didn't have a natural flow and seemed almost forced, where all three male characters were enticed by Juliette and all three wanted her... Sorry, I did not buy that.
What I can say is that I expected more of this great preamble of a synopsis and the ending didn't drag me out to buy the next book in the series... although from the middle of the book to the end, the actions and descriptions got a lot better, I must say.
As a plus side it was a quick and easy read.
En lire plus
2 personnes ont trouvé cela utile
Signaler un abus
Traduire les commentaires en Français
Afficher tous les commentaires