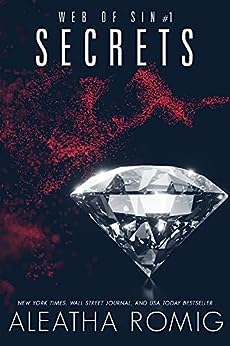 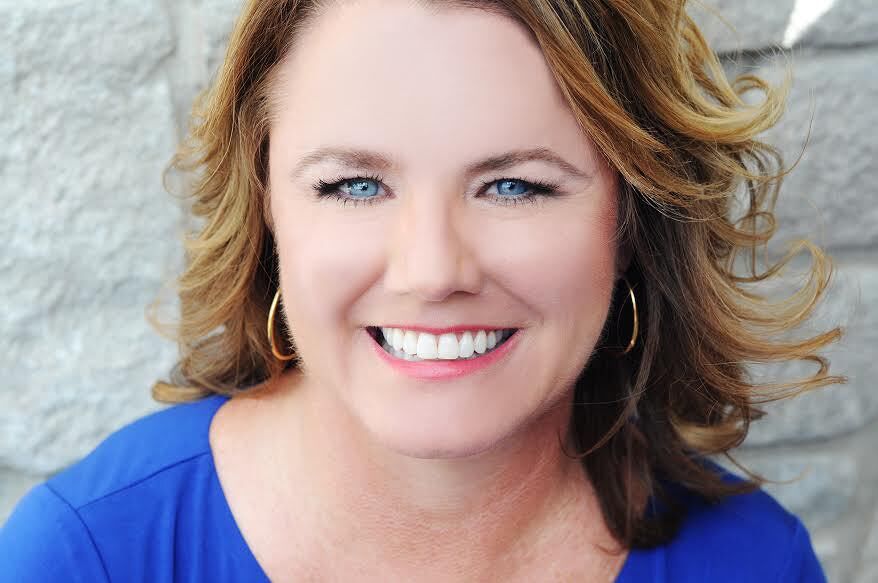 I rule the world you see and the one good people pretend they don’t.

Nearly two decades ago, my father showed me a photograph—a girl with golden hair and light brown eyes—and told me that one day, if I proved myself, the girl would be mine.

Chicago is now mine.

It is time to claim my queen.

I get what I want and I want you.”

By New York Times bestselling author Aleatha Romig, the twisted and intriguing storytelling that you loved in Consequences and Infidelity is back in the Sparrow Webs. Web of Sin is a dangerous, gritty romance, complete with an all-new alpha anti-hero who will haunt your dreams and your fantasies.

SECRETS is book one of Sterling and Araneae’s story, Web of Sin. Their story continues in LIES and concludes in PROMISES.

Aleatha Romig is a New York Times and USA Today bestselling author who lives in Indiana. She grew up in Mishawaka, graduated from Indiana University, and is currently living south of Indianapolis. Together with her high-school sweetheart and husband of twenty-eight years, they've raised three children. Before she became a full-time author, she worked days as a dental hygienist and spent her nights writing. Now, when she’s not imagining mind-blowing twists and turns, she likes to spend her time with her family and friends. Her pastimes include reading and creating heroes/anti-heroes who haunt your dreams!

CONSEQUENCES, her first novel, was released August 2011, by Xlibris Publishing. Then in October of 2012, Ms. Romig re-released CONSEQUENCES as an indie author. TRUTH, the sequel, was released October 30, 2012, and CONVICTED, the third in the series, was released October 8, 2013. Unexpectedly, the fourth book of the Consequences series came to life with REVEALED: THE MISSING YEARS. It is the fourth full-length novel in the series. It explores the years in CONVICTED that previously were only mentioned, as well as a complete character glossary and timeline. REVEALED was released May 20, 2014. BEYOND THE CONSEQUENCES, book #5, will be released in 2015. Yes...MORE Tony and Claire.

Aleatha is a “Published Author’s Network” member of the Romance Writers of America and represented by Danielle Egan-Miller of Brown and Miller Literary Associates.

Mimiorphee
5,0 sur 5 étoiles Let yourself be Aleatha'd!!!!
Commenté en France le 31 octobre 2018
Have you been Aleatha’d?

Yes, I have, but I also know that it's been too long since the last time because I had forgotten how good it felt!

Secrets is the first book of Aleatha Romig's new series, Web of Sins. Powerful, controled and a true mastermind, Sterling turned  Kennedy/ Araneae's world upside down, smashing the young successful business woman's life into pieces when he came for her, claiming that he owns her.

My mind is still reeling from what I just finishing reading: a twisted and complex storyline, with magnificent and regal characters. From the beginning the intrigue piqued my curiosity, the need to pierce Sterling's secrets about Araneae and to find out who Sterling is, to know if the man I think he is is only a facade or not. I loved being thrown into their dangerous world, eaten away by the threats and consumed by the sexual tension. Both lead characters are compelling; Araenae stands her ground, she is strong and proud, feisty and sassy, which appeals to Sterling who admires her fire and intelligence. I can almost imagine them working together, but it's way too early for make such assumptions, when we are so far from the whole picture.

The author surprised me with her storyline I clearly didn't expect, and a villain (but is he?)  that grew on me. I'm still not trusting my feelings for Sterling and although Secrets wasn't as dark as I expected it to be (considering the author's previous series), I have the impression that more darkness is coming with Lies in December. Furthermore, with an ending like this one, I can only bow to the author for her talent.
En lire plus
Utile
Signaler un abus
Traduire les commentaires en Français
Afficher tous les commentaires

Jedz
3,0 sur 5 étoiles Disappointed
Commenté au Royaume-Uni le 14 novembre 2018
Achat vérifié
Loved the characters grabs you from the first chapter. My disappointment comes from the fact that it is short in content as though it is being stretched out to make it into a trilogy previously this author as always given good value, not only that but AR as always delivered originality in her plots however while reading this story as much as I enjoyed it l found this plot was very similar to the Indebted series by Pepper Winters, even though I liked P. Winters I no longer buy her books because l got fed up with feeling ripped off when the book finished at 80% and the series being stretched to six books when it could have been completed in three. At least the plot is a more romantic gentler take on the Indebted theme, and as not gone all the way of other plots were the son wanted to break away from his mafia fathers ways, it just seems to me that this plot is a cobbling together of ideas taken from a number of previously published books in this genre and that's why I am disappointed or perhaps I have just read to many books in this genre.
En lire plus
8 personnes ont trouvé cela utile
Signaler un abus
Traduire les commentaires en Français

Marian Chawner
5,0 sur 5 étoiles Araneae a lady with many names caught up in a web of intrigue
Commenté au Royaume-Uni le 25 novembre 2018
Achat vérifié
Well Aleatha has done it yet again. What a story. Sucks you in to the web of mystery, intrigue, drama and lots more. The element of ultimate sinisterism abounds also. Araneae has several necessary identities. We start with Renee having to abandon her life and become Kennedy, at the age of sixteen. Several years later, a successful business woman, she has a chance meeting with a very tall dark mystifying dark stranger. A man with the surname she was informed by her adoptive mother, to avoid. Sparrow. Sterling is a very powerful dark character, who owns lots of things., including her. I will not spoil it anymore. There is humour, lustful scenes, and a hint of romance, but always an unknown menacing feeling lurking in the back drop. The two main characters are very strong and one exceptionally more forceful than the other. Domination and intolerance to lack of obedience is a factor also to be considered, by Araneae if she wishes as smooth protected life. However she is not a very good submissive and doesn’t respond well to being told what to do. An excellently well written novel. Descriptive, and imaginative without the clutter of unnecessary bedroom scenes, and over lustful overtones, but still sizzling with chemistry and electrical vcharges that keep the reader on its toes. Once started very difficult to put down, and once finished very difficult to wait for the second book in this already dynamic trilogy.
En lire plus
2 personnes ont trouvé cela utile
Signaler un abus
Traduire les commentaires en Français

Kindle Customer
2,0 sur 5 étoiles Sigh
Commenté au Royaume-Uni le 17 décembre 2018
Achat vérifié
It started when spider made the assumption that sparrow saw the 'real' her from the very first time she witnessed him ogling her. Then a few thousand more assumptions from spider. Her character just didn't make sense to me (yes im aware how silly that sounds). We seemed to be stuck in her head, for the most part, with her ramblings. A very slow burn.

It is with a heavy heart that i leave this, as I adore Althea Romig's talent and smarts. I understand that its hard to replicate quality like that of Consequences, but it certainly proved so here.
En lire plus
4 personnes ont trouvé cela utile
Signaler un abus
Traduire les commentaires en Français

Battleaxe Betty
3,0 sur 5 étoiles Good start
Commenté au Royaume-Uni le 3 janvier 2020
Achat vérifié
I agree with a previous review about the costs of these kindle instalments. The three books could easily be one. The only reason authors do books in parts that end on cliffhangers is so you have to buy part 2&3 to get the complete story, which makes this very expensive for an ebook.
The story is ok, dragged out obviously to stretch it to three books. Arannae/Renee has a mysterious past which I’m sure book three will provide the answers to. It’s probably possible to skip book two and go straight to book three from reading the book two reviews saying it just adds more questions to her past.
En lire plus
Une personne a trouvé cela utile
Signaler un abus
Traduire les commentaires en Français

For Old Times' Sake
3,0 sur 5 étoiles 3.5 stars
Commenté au Royaume-Uni le 10 décembre 2018
Achat vérifié
This is the first book I have read by this author and I wasn't sure what to expect. I thought the story was good, but I wasn't persuaded about the chemistry of the two main characters. I would have liked the book to be a little slower paced, which could allow for more tension and a building of the relationship between the main characters. I also would have liked the story to have taken place in Chicago, the seat of Stirling's empire and power, but that's just my preference. Having said that, this is the first part of a 3 part story, so that missing magnetism between the characters may well develop in book 2 and 3.
En lire plus
2 personnes ont trouvé cela utile
Signaler un abus
Traduire les commentaires en Français
Afficher tous les commentaires
Signaler un problème
Cet article contient-il des contenus inappropriés ?
Rapport
Pensez-vous que cet article enfreint un droit d'auteur ?
Rapport
Est-ce que cet article présente des problèmes de qualité ou de mise en forme ?
Rapport