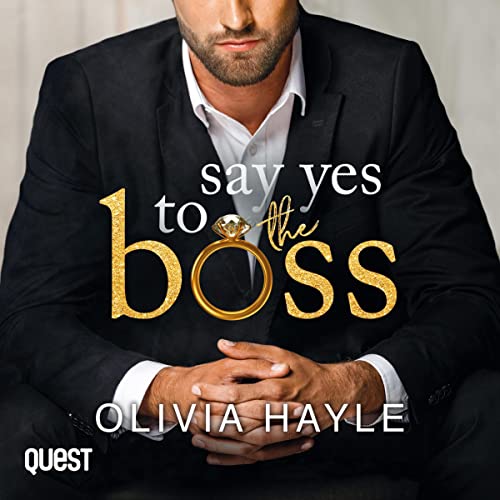 My billionaire boss is the absolute last person I’d marry. Until a deal with the devil forces me down the aisle...ready to say yes to the boss.

I once compared Victor St Clair to Satan, but that’s unkind. Even the devil treats his demons better than St Clair treats me. I know his schedule by heart. He can’t remember my first name. So when he calls me into his office, I’m expecting another rant. Instead he says he needs to get married to inherit the St Clair fortune. Oh, and the kicker? He wants to marry me. His assistant.

A one-year marriage of convenience to the boss I hate. It means living with Victor’s dark stares and silences for a full year. But it’s also a chance to quit my job and start my own business. He’s a jerk, but he’s also a respected businessman. How hard can it be? Answer: very. Because there’s more to Victor than I thought.

Justine FRANCOIS
5,0 sur 5 étoiles Great series
Commenté en France le 8 octobre 2021
I love everything I have read by Olivia Hayle, this one was no exception. Victor and Cecilia were both interesting and their relationship was fascinating to follow. I absolutely love Victor! This story was great, easy to read, hard to put down!

L beaver
5,0 sur 5 étoiles Nicely written.
Commenté au Royaume-Uni le 26 novembre 2021
Achat vérifié
Victor St Claire, the man who was at the top of the handsome list, super rich, driven but also void of feelings for others. Cecilia had managed to be his personal assistant for a nearly a year and she had just about managed to survive. He didnt believe in breaks, called her to do work on her birthday and had her in tears more than once so it came as a big surprise when he ask her to marry him. It was in his grandfathers will and she agreed to the business deal. They married quickly, she moved into his penthouse and gradually you start to see a change in his attitude. Its a lovely read to see the hard man change and then see him get upset when he thinks she wants to finish it.
En lire plus
2 personnes ont trouvé cela utile
Signaler un abus
Traduire les commentaires en Français

Shirley
5,0 sur 5 étoiles This is a great billionaire romance
Commenté au Royaume-Uni le 8 octobre 2021
Achat vérifié
Victor and Cecilia. Well Victor, what were you thinking not looking beyond the clothes while Cecilia worked for you. I loved this book, reminds me of someone. I loved the honesty in it and the genuine hurt Victor felt when thinks went pear shaped. It is a lovely read and as always Olivia delivers in an outstanding way. Thank you. I loved it.
En lire plus
2 personnes ont trouvé cela utile
Signaler un abus
Traduire les commentaires en Français

Kindle Customer
5,0 sur 5 étoiles Exceptionally romantic. It sizzles!
Commenté au Royaume-Uni le 15 octobre 2021
Achat vérifié
I'm a sucker for love/hate relationships. Make it into a .marriage of convenience with attitude and I'm a goner! Add in a fair amount of humour and angst combined with belated scorching attraction and you have the ideal read. But be careful - this is addictive. I needed to read it in one go! ❤😍😉😏
En lire plus
2 personnes ont trouvé cela utile
Signaler un abus
Traduire les commentaires en Français

oola
5,0 sur 5 étoiles 5* isn't enough
Commenté au Royaume-Uni le 16 juin 2022
Achat vérifié
I ABSOLUTELY loved this book- best one in 'marriage of convenience to my boss' trope. Characters were written amazingly well and relatable, there was no insta-love- just a couple of people who start to see each other in a different light and fall for each other.
I was glued to this book!
En lire plus
Signaler un abus
Traduire les commentaires en Français

Issa Jo
5,0 sur 5 étoiles Love Love Love this book!!! Highly recommend to read
Commenté au Royaume-Uni le 16 octobre 2021
Achat vérifié
This is such a wonderful story. What they both needed was right in front of them all along. Beautiful writing too . I love how the writer ties in previous characters in her other book. . Highly recommended
En lire plus
2 personnes ont trouvé cela utile
Signaler un abus
Traduire les commentaires en Français
Afficher tous les commentaires