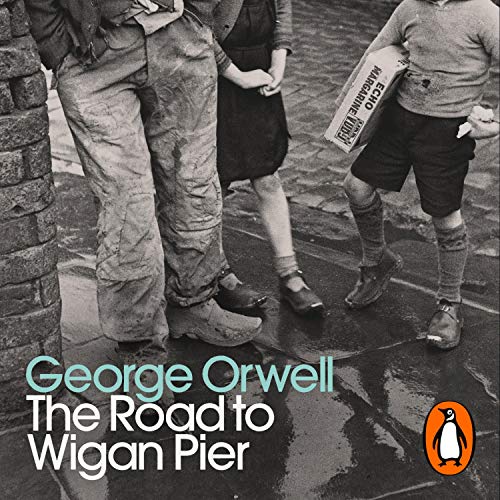 George Orwell's searing account of working-class life in the bleak industrial heartlands of Yorkshire and Lancashire in the 1930s, The Road to Wigan Pier is a brilliant and bitter polemic that has lost none of its political impact over time.

Orwell's graphically unforgettable descriptions of social injustice, cramped slum housing, dangerous mining conditions, squalor, hunger and growing unemployment are written with unblinking honesty, fury and great humanity. It crystallized the ideas that would be found in his later works and novels and remains a powerful portrait of poverty, injustice and class divisions in Britain.

Dolmup
3,0 sur 5 étoiles Interesting although outdated
Commenté en France le 12 juin 2020
Achat vérifié
Interesting for those who take interest in George Orwell life and works. He is definitely one of the great leftist intellectual of the twelve century. On this aspect, in my view, his best book remains Homage to Catalonia.
Outdated because G. Orwell tries to save the idea of Socialism against the splits in classes, sub-classes, groups and subgroups. He forsees the reasons why Socialism and Communism will end in the worst dictatorship and economical failures of the twelve century. We (almost) all know that now.
En lire plus
Utile
Signaler un abus
Traduire les commentaires en Français

Maria
4,0 sur 5 étoiles You can have a lovely day with Wigan Pier
Commenté au Royaume-Uni le 14 juin 2018
Achat vérifié
Even the most ardent George Orwell fan would admit that this book would do well with some editing. "The Road to Wigan Pier" is essentially two books, the first is an account of life in the industrial midlands and north. In this section it is unflinching in its account of the poverty and desperation which drives people to actions such as risking their lives in the mines. The section on how when a man dies in the mines, all the other men contribute money from their wages to the widow is harrowing. That simple fact that it happens so often there is a stamp for it is shocking in the extreme.

The second half is an interesting, often funny account of why people are turned off the socialist cause. I had many a moment where I laughed out loud, particularly at these kind of quotes:

"It would help enormously, for instance, if the smell of crankishness which still clings to the Socialist movement could be dispelled. If only the sandals and the pistachio-coloured shirts could be put in a pile and burnt, and every vegetarian, teetotaller, and creeping Jesus sent home to Welwyn Garden City to do his yoga exercises quietly! But that, I am afraid, is not going to happen."

"The truth is that, to many people calling themselves Socialists, revolution does not mean a movement of the masses with which they hope to associate themselves; it means a set of reforms which 'we', the clever ones, are going to impose upon 'them', the Lower Orders."

Whether you agree or not, you have to admit at times Orwell had a point and that point persists today.

As I indicated, the structure of the book feels a bit clunky though. My advice is not to read the forward before reading the book but to read it afterwards. It gives away a lot of the structure and how it was received which I preferred to think about after the event. The reason for the lack of an editing eye was Orwell had left for the Spanish Civil War just before publication.

One thing I would say is you don't have to be hard left to read Orwell, in fact he's as critical of the hard left as he is of capitalism. Also Orwell is really easy to read and you feel like you've read something of note every time you read one of his books.
En lire plus
68 personnes ont trouvé cela utile
Signaler un abus
Traduire les commentaires en Français

Chris
2,0 sur 5 étoiles Orwell's text is great - this Kindle edition isn't
Commenté au Royaume-Uni le 17 juillet 2020
Achat vérifié
I'm loathed to give the book 2 stars. I love Orwell's work and this one is no exception. Orwell's experience in a coal mining village and his first-hand account of poverty is gripping. However, this Kindle edition is shocking. There are letters missed out and works incorrectly hyphenated. Consider the Gutenberg edition or the paperback edition instead of this one.
En lire plus

Chris
2,0 sur 5 étoiles Orwell's text is great - this Kindle edition isn't
Commenté au Royaume-Uni le 17 juillet 2020
I'm loathed to give the book 2 stars. I love Orwell's work and this one is no exception. Orwell's experience in a coal mining village and his first-hand account of poverty is gripping. However, this Kindle edition is shocking. There are letters missed out and works incorrectly hyphenated. Consider the Gutenberg edition or the paperback edition instead of this one.
Images dans cette revue

tallmanbaby
4,0 sur 5 étoiles classic essays on the industrial north
Commenté au Royaume-Uni le 25 novembre 2017
Achat vérifié
This is a vivid and affecting account of the bleak lives of the working class in the industrial north of England. The first half is a set of essays, the first one is on life in a tripe shop come boarding house and is an object lesson in how to write, as is the superb account of working in a coal mine.

By modern standards the structure is probably rather shambolic, and it is stronger on personal experience than evidence, but as a writer, Orwell has the ability to just vanish and let the lives of those he is describing come fully alive before you.

The second half was not originally published, and it is easy to see why. It is part debate, part rant, about his desire for the rise of socialism. He takes swipes at all and sundry, from nouveau Catholics, to sandal wearing lefties and Quakers in their garden cities. He debates the attractiveness of the English physique and whether the working class smell. Despite this, he comes across as sincere, well intentioned, and uncannily astute on a great many things.

After this, Orwell headed off to fight in the Spanish civil war, and he is surely one of the most impressive Britons of the twentieth century.

JRF
5,0 sur 5 étoiles Superb non-fiction from George Orwell
Commenté au Royaume-Uni le 3 juillet 2017
Achat vérifié
If you enjoyed "1984" and "Animal Farm", and want to read more of Orwell's superb prose, this work of non-fiction is unlikely to disappoint. In the first part, the author pulls no punches in his searing description of the appalling conditions in which many North of England working class people lived between the two world wars. The second part is a sympathetic survey of socialism - a system Orwell would later turn strongly against. Being very much rooted in how things looked at the time, this part is perhaps less accessible to modern readers, but is certainly of historical interest.

Prof Norman J. Graves
3,0 sur 5 étoiles A 1930s classic?
Commenté au Royaume-Uni le 17 août 2020
Achat vérifié
The Road to Wigan Pier is a book which has been much written about especially in relation to George Orwell, its author, who rose to fame as a result of the successes of his other books: Animal Farm and Nineteen-eighty-four. As I had not read The Road to Wigan Pier, I decided to find out what I had missed.
The book is in two parts: Part One is the story of his living among the unemployed of Northern England in 1935. As I was alive in the 1930s, the son of a father who was unemployed for two years, what George Orwell reports strikes a chord in my memory, though I lived in Southern England at the time. He describes in detail the appalling conditions in which the working class unemployed lived in Lancashire and Yorkshire. Yet in so doing, he is unable to distance himself from his middle class upbringing, and this is manifest in his comments on the people he lived with.
Part Two is an attempt to indicate how socialism might remedy the situation. It also contains his analysis of why the then existing left wing parties would not succeed in bringing about socialism in the UK. Again his own prejudices come out in this analysis, for example, he is obsessed by the social class issue, and he seems to dislike vegetarians, Quakers and sandal wearers! There is also a tendency for Orwell to repeat himself, consequently, Part Two is overlong for what he has to say .
Thus although there is a hint in this book of the intellectual promise of his later works, apart from the revelation of the poverty of the northern working class in Part One, this book is not, in my view, a classic.
En lire plus
Une personne a trouvé cela utile
Signaler un abus
Traduire les commentaires en Français
Afficher tous les commentaires