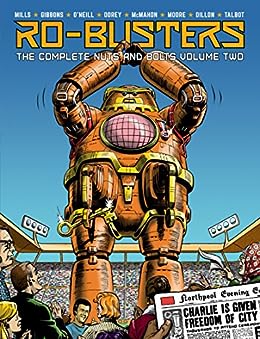 PAT MILLS is the creator and first editor of 2000AD. He developed Judge Dredd and is the writer-creator of many of 2000AD’s most popular stories such as Sláine, Nemesis and ABC Warriors. Amongst his credits are Marshal Law, (Marvel and D.C. Comics) co-created with Kevin O’Neill, the French graphic novel series Requiem, Vampire Knight with artist Olivier Ledroit, and Be Pure! Be Vigilant! Behave! The Secret History of 2000AD and Judge Dredd. His current projects include Joe Pineapples: Tin Man, illustrated by Simon Bisley and Clint Langley, Spacewarp, and Kiss My Axe! The Secret History of Sláine the Warped Warrior.

Kevin O’Neill is a 2000 AD legend. From working as an art assistant on the very first prog, he quickly became involved in the creative side of the comic, co-creating classics like A.B.C. Warriors, Bonjo From Beyond The Stars, Metalzoic and Nemesis the Warlock. O’Neill has also written for the comic on strips including Dash Decent, Future Shocks, One-Offs, Tharg the Mighty, and has illustrated Future Shocks, Judge Dredd, M.A.C.H. 0, One-Offs, Ro-Busters, Ro-Jaws’ Robo-Tales, Tharg the Mighty and Torquemada. Outside the Galaxy’s Greatest Comic, O’Neill was briefly notorious as the only artist ever to have his work rejected wholesale by the Comics Code Authority! Happily, his notoriety quickly became fame and acclaim, as his work on strips like Marshal Law and most recently The League of Extraordinary Gentlemen have raised him to a very high profile. O’Neill’s other work includes Green Lantern and Batman.

Dave Gibbons is one of 2000 AD’s most popular artists, having co-created Harlem Heroes and Rogue Trooper. He has also pencilled A.B.C. Warriors, Dan Dare, Judge Dredd, Mega-City One, Ro-Busters, Tharg the Mighty, Tharg’s Future Shocks and Time Twisters, as well as having scripted several Rogue Trooper stories – making Gibbons one of the few 2000 AD creators to have served as writer, artist and letterer! Beyond 2000 AD, Gibbons is unquestionably best known for his work on the award-winning classic Watchmen (with Alan Moore), but he has also drawn Batman, Doctor Who, Give Me Liberty, Green Lantern, Superman, Star Wars and his graphic novel, The Originals.

Perhaps the most widely respected comic writer of the modern era, Alan Moore’s contribution to the comics world is incalculable. Creator of some of 2000 AD’s most popular series, including Abelard Snazz, The Ballad of Halo Jones, D.R. & Quinch and Skizz, he has also worked on A.B.C. Warriors, Ro-Busters, Rogue Trooper, Ro-Jaws’ Robo-Tales, Tharg the Mighty, Time Twisters and several one-off strips. Outside of the Galaxy’s Greatest Comic, Moore is best known for his work on the classic Watchmen, which redefined the superhero genre in 1986, but this is simply touching the surface of a career which has included 1963, A1’s Warpsmiths, Bojeffries Saga and Maxwell the Magic Cat, AARGH!, Batman, Big Numbers, Brought to Light, Captain Britain, Deathblow, Flesh and Bones, From Hell, Glory, Green Lantern Corps, Lost Girls, Miracleman, A Small Killing, Snakes and Ladders, Spawn, Supreme, Swamp Thing, Superman , V For Vendetta, WildC.A.T.S. and Youngblood. Moore is now owner and chief writer of the America’s Best Comics line, distributed by WildStorm, and including Promethea, Tom Strong, Tomorrow Stories, Top Ten and The League of Extraordinary Gentlemen, which has been made into a major Hollywood movie. --Ce texte fait référence à l'édition hardcover.

Kevin Trebell
5,0 sur 5 étoiles A great collection, bringing together the remaining Ro-Busters stories.
Commenté au Royaume-Uni le 25 janvier 2017
Achat vérifié
This second hardback collection of Ro-busters completed the collection of stories of the team of Rojaws, Hammerstein and their various colleagues within the Ro-busters organisation.

The two major stories here are the Terrameks story and the Fall and Rise of Rojaws and Hammerstein, These are both excellent, fun and entertaining stories and the kind of quirky sci-fi that led me to love 2000AD as a kid (and keep reading it now).

This collection also collects various stories from Starlord as well as 2000AD and some solo Ro-Jaws stories.

J. Hayes
4,0 sur 5 étoiles Great Gibbons Art!
Commenté au Royaume-Uni le 6 avril 2018
Achat vérifié
I bought this purely for the Dave Gibbons' drawn stories - of which there are seven - which are all excellent, especially the superb story of the giant robot, Charlie. Fans of 2000 AD will probably find the other stories just as impressive, although, with one or two exceptions, the rest of of the artwork is dire. A handsomely presented book, though.
En lire plus
Signaler un abus
Traduire les commentaires en Français