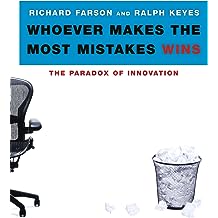 Whoever Makes the Most Mistakes Wins (English Edition) 11 mars 2003
par Richard Farson, Ralph Keyes
( 1 )
6,82 €
Success in today's business economy demands nonstop innovation. But fancy buzzwords, facile lip service, and simplistic formulas are not the answer. Only an entirely new mindset -- a new attitude toward success and failure -- can transform managers' thinking, according to Richard Farson, author of the bestseller Management of the Absurd, and Ralph Keyes, author of the pathbreaking Chancing It: Why We Take Risks, in this provocative new work.
According to Farson and Keyes, the key to this new attitude lies in taking risks. In a rapidly changing economy, managers will confront at least as much failure as success. Does that mean they'll have failed? Only by their grandfathers' definition of failure. Both success and failure are steps toward achievement, say the authors. After all, Coca-Cola's renaissance grew directly out of its New Coke debacle, and severe financial distress forced IBM to completely reinvent itself.
Wise leaders accept their setbacks as necessary footsteps on the path toward success. They also know that the best way to fall behind in a shifting economy is to rely on what's worked in the past -- as when once-innovative companies like Xerox and Polaroid relied too heavily on formulas that had grown obsolete. By contrast, companies such as GE and 3M have remained vibrant by encouraging innovators, even when they suffered setbacks. In their stunning new book, Farson and Keyes call this enlightened approach "productive mistake-making." Rather than reward success and penalize failure, they propose that managers focus on what can be learned from both. Paradoxically, the authors argue, the less we chase success and flee from failure, the more likely we are to genuinely succeed.
Best of all, they have written a little jewel of a book, packed with fresh insights, blessedly brief, and to the point.
En lire plus
Autres formats: Relié
TVA incluse