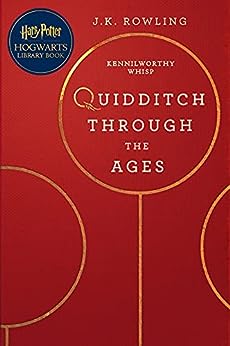 A perennial bestseller in the wizarding world and one of the most popular books in the Hogwarts School library, Quidditch Through the Ages contains all you will ever need to know about the history, the rules - and the breaking of the rules - of the noble sport of Quidditch. Packed with fascinating facts, this definitive guide by the esteemed Quidditch writer Kennilworthy Whisp charts the game's history from its early origins in the medieval mists on Queerditch Marsh, through to the modern-day sport loved by so many wizard and Muggle families around the world. With comprehensive coverage of famous Quidditch teams, the commonest fouls, the development of racing brooms, and much more, this is a must-have sporting bible for all Harry Potter fans, Quidditch lovers and players, whether the weekend amateur or the seasoned Chudley Cannons season-ticket holder.


This brand new edition of the most famous sports book in the wizarding world pairs J.K. Rowling's original text, with gorgeous jacket art by Jonny Duddle and line illustrations throughout by Tomislav Tomic. A contribution from the sale of each book will go to Comic Relief.
--Ce texte fait référence à l'édition hardcover.

J.K. Rowling is best known as the author of the seven Harry Potter books, which were published between 1997 and 2007. The enduringly popular adventures of Harry, Ron and Hermione have gone on to sell over 500 million copies, be translated into over 80 languages and made into eight blockbuster films. Alongside the Harry Potter series, she also wrote three short companion volumes for charity: Quidditch Through the Ages and Fantastic Beasts and Where to Find Them, in aid of Comic Relief and Lumos, and The Tales of Beedle the Bard, in aid of Lumos. J.K. Rowling collaborated with playwright Jack Thorne and director John Tiffany to continue Harry’s story in a stage play, Harry Potter and the Cursed Child, which opened in London in 2016 and is now playing worldwide. In the same year, she made her debut as a screenwriter with the film Fantastic Beasts and Where to Find Them, the first in a series featuring Magizoologist Newt Scamander, which was inspired by the original companion volume. J.K. Rowling has also written a standalone novel, The Casual Vacancy, and is the author of the Strike crime series under the pseudonym Robert Galbraith. Both have been adapted for television. In 2020 J.K. Rowling returned to publishing for younger children with the fairy tale The Ickabog, the royalties from which she is donating to groups affected by the Covid-19 pandemic. She has received many awards and honours, including an OBE and a Companion of Honour for services to literature and philanthropy. She lives in Scotland with her family. --Ce texte fait référence à l'édition hardcover.

"With these two books, Rowling displays her remarkable imagination and her genius for creating a parallel world through her words." -- USA TODAY

"These amusing, imaginative little paperbacks are required reading for all Potter fans." -- NEWSWEEK

If you're a Harry Potter fan and are desperate to fill the gap between Harry Potter and the Goblet of Fire and the next instalment (sorry folks, no date as yet but as soon as we know we'll tell you), then this JK offering could be the answer to your Potter prayers.

JK Rowling takes her enviable ability to turn paper into gold to the next level by cleverly teaming up with Comic Relief 2001 to bring Fantastic Beasts and Where to Find Them (a set text during Harry's first year at Hogwarts) and Quidditch Through the Ages (Harry's favourite book), to the masses--and all the money goes to charity.

To be one of the first to lay your hands on these books, simply order now. And on Friday, March 16 just watch as the money you pay goes into the Comic Relief coffers... --Susan Harrison --Ce texte fait référence à l'édition kindle_edition.

Optimus
4,0 sur 5 étoiles Good book to complete the series
Commenté en France le 27 décembre 2018
Achat vérifié
The book itself is much less interesting than the other HP of course. It is more a kind of history about the quidditch sport and how it developed
Can be interesting to complete the HP books
En lire plus
Utile
Signaler un abus
Traduire les commentaires en Français

Zoe
5,0 sur 5 étoiles Interesting..
Commenté au Royaume-Uni le 13 janvier 2014
Achat vérifié
I found this book to be far better than "fantastic beasts and where to find them" as it goes in to more depth with the history, which could be seen as very convincing. The book starts off by going into explaining the humble beginnings of the game in a wizard's family garden. The book continues on to the more primitive, earlier version of the game, the rules and the controversies, the historic games, the advances in broomsticks - how it was popular to make your own in the early stages of the games before witches and wizards eventually decided to buy them made from companies. It also talks about the balls used in the game and what they were once originally made of and what the Golden Snitch was based on. It finishes by explaining how the game is played today.
Throughout there are mentions of prominent Teams and Players throughout the world and how it spread throughout. A whole chapter being dedicated to the Quidditch teams of The UK and Ireland.

I love how Rowling does a great job making this world believable that it's actually real. I think all Harry Potter fans should at least read this once.
En lire plus
17 personnes ont trouvé cela utile
Signaler un abus
Traduire les commentaires en Français

Sherise Hudlin
2,0 sur 5 étoiles Went through hell to get a boring book :(
Commenté au Royaume-Uni le 9 février 2021
Achat vérifié
Im a bit cautious about this book. I bought it a month ago, only for it to come with other things i’ve ordered from amazon but it wasn’t there. The box looked like it had been manually opened, which meant it had been stolen from the delivery person as i was at the door receiving my parcel or it hadn’t been shipped at all. I went on Amazon to see if it had came yet, it said it had arrived at my address but it just wasn’t there. So after the shock of that, I called amazon and i was given a free copy of the book. I was angry when they said it would come maybe in the month of March, two months!!

Anyways, I accepted. It came 2 weeks later the book, not in hardcover as I wanted. It took me 3 hours to read the book and it gave just a brief explanation of where and how quidditch appeared.
I’m a massive potter head and I would say there isn’t much to it, i’ve been collecting harry potter for 3 years and i’ve dedicated a whole room for it. It’s now sitting on a book display on my bookshelf with the rest of my collectibles. But i really did have to go through hell just to get a 150-190 page book that, not going to lie, is pretty boring. It’s just nice to display really.
En lire plus
Signaler un abus
Traduire les commentaires en Français

Paul Dean
5,0 sur 5 étoiles Excellent further reading for the Harry Potter fans out there!
Commenté au Royaume-Uni le 10 mai 2018
Achat vérifié
Excellent book from JK Rowling adding another sprinkle of magic to the Harry Potter universe. If you're a fan and you've read everything else HP related then I'd recommend investing in a copy of Quidditch Through the Ages as referenced in the books themselves!
En lire plus
5 personnes ont trouvé cela utile
Signaler un abus
Traduire les commentaires en Français