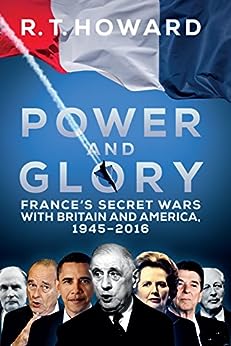 "Excellent... Howard tells a rattling tale, full of slapstick and bloodshed...One chapter, straight from the pages of Graham Greene, recounts a duel between British spies and French officials in post-war Madagascar...The author is good on the vying power centres in Paris (and) Howard's chapter on the Falklands War is a thorough dissection of how these interest groups almost prevailed over Mitterrand's pledge of support to Margaret Thatcher." --The Sunday Times

"As Howard shows, French diplomacy has been involved in a continuous war of manoeuvre against the Anglo-Saxons. Its existence has rarely been acknowledged, so Howard's study is especially valuable... it also contains a great deal of useful material" --London Review of Books --Ce texte fait référence à l'édition hardcover.

R. T. Howard is an editor of Eye Spy, an international magazine on intelligence issues. His articles have appeared in The Guardian, The Times, Daily Telegraph, Daily Mail, Daily Express, Independent on Sunday, Wall Street Journal, Spectator, New Statesman, International Herald Tribune, National Interest and Jane's Intelligence Review. He has also published for organisations such as IISS, RUSI and Chatham House. In addition to Power and Glory, he has authored five books, which have been translated into eight languages. --Ce texte fait référence à l'édition hardcover.

Amazon Customer
3,0 sur 5 étoiles Folie de grandeur?
Commenté au Royaume-Uni le 2 décembre 2017
Achat vérifié
Fascinating insight into the huffy mindset and laughable pretension of some in the French
political classes. They should heed John Bunyan's matchless advice - 'He who is down need fear no fall, he who is low no pride!' Intriguing, if turgidly written in places. But I still love the country, its culture, and its language. .
En lire plus
Signaler un abus
Traduire les commentaires en Français

David Lindsay
5,0 sur 5 étoiles The Problem With France
Commenté aux États-Unis le 31 juillet 2017
Achat vérifié
RT Howard is a British journalist. Power and Glory describes the post-WW2 relationship between France and the Anglo-Saxons. Anglo-Saxon is the term the French use to describe the world’s English-speaking nations. In practice, this has usually meant the U.S. and Britain. I found the book a fascinating read and it explained a lot. However, the portrait of the French is not very flattering and they come across more as frenemies than allies. Howard shows that they have sometimes been duplicitous, paranoid, unprincipled, and hypocritical.

Howard claims that after WW2 the French were obsessed with regaining their status as a great power. They had been occupied by Germany during the war and they believed that to be a great power again they needed their empire back. However, nationalism was on the march and most emerging countries wanted independence. The French were unpopular and were not welcomed back in Syria, Indochina (Vietnam, Laos, Cambodia), and North Africa. Most of the conflicts described in the book relate to France’s desperate attempts to maintain a hold on its pre-war empire. This involved them in wars with insurgents throughout the 1940s and 1950s. About 26,000 French soldiers died fighting in Algeria and 20,000 in Indochina. By the 1960s France was forced to admit defeat.

According to Howard, the French believe they are a special people and are destined for greatness. However, unfortunately for them they have needed the help of the “Anglo-Saxons” for much of the 20th century. After 1945 they could not afford a global empire. They also believed that the Anglo-Saxons were conspiring to take their empire away from them. They needed financial help from the U.S. to fight in Indochina and still lost. They also resented American interference and just wanted the U.S. to sign the checks, no questions asked. The U.S. took up the struggle in Vietnam after 1954.

FDR had wanted an end to colonialism and encouraged self-determination for the French colonies. However, America became fixated on the communist menace in the late 1940s and that soon took priority. The U.S. emerged from WW2 as a superpower and was looking for bases around the world and the French had some interesting real estate. The U.S. was providing aid to France in the form of the Marshall Plan. The U.S. paid half the cost of France’s war in Indochina because it believed that victory would help defeat global communism. The French viewed communism and the Anglo-Saxons as twin threats. Michael Portillo, who was British Defence Secretary in the 1990s, met regularly with his French and American counter-parts, he recently told the BBC that the French were anti-American and wanted the U.S. military to leave Europe. He also said that the Americans did not understand this.

The book chronicles France's main conflicts after 1945 starting with Syria. During WW2, Britain defeated the Vichy French forces in Syria which were allied with the Germans. In 1945, Syria was handed back to France, but the French were brutal and unpopular. Protestors were massacred in Damascus, with at least 641 killed. The British intervened and confined the French army to barracks. The U.S. and Britain agreed that France should leave Syria in 1946. Syria then became a democracy. Howard claims that French brutality pushed the Syrians into the Soviet camp. He argues that the same thing in happened in Indochina and in other places. He discusses Madagascar, a French colony off the coast of Africa, where the French believed the Anglo Saxons were encouraging rebellion. The locals liked America’s rhetoric about liberty and wanted something similar. In 1947, the French used the same “savagery” they had used in Damascus to put down rebels armed mostly with spears and machetes.

Howard believes France's problems with Britain go back to the Fashoda Incident in 1898. Britain in 1898 considered Sudan to be part of its sphere of influence and it wanted to build a railroad from Cairo to South Africa. A few years earlier Britain’s General Gordon had been killed defending Khartoum in a siege. Khartoum was attacked by Islamic forces led by the Mahdi (an Islamic Messiah figure). In 1898, Britain exacted revenge by defeating an Islamic army at the Battle of Omdurman and then captured Khartoum. The British had just pacified the country and suddenly French soldiers turned up and claimed it for France. The British told the French soldiers to get lost, which they did. No shots were fired. French history text books regarded this as a national humiliation. Howard claims that it took the French a long time to forget Fashoda.

The main villain in this story is Charles de Gaulle who led the French government in exile during WW2 and was French President 1959-1969. De Gaulle is depicted as someone who was slightly nuts and constantly trying to cause trouble. He was obsessed with the greatness and glory of France. De Gaulle, had a difficult relationship with the allies during WW2 because FDR and Churchill would often ignore him. France was occupied by Germany and it was not clear how much support de Gaulle really had among his countrymen. Howard claims that de Gaulle was an Anglophobe, who later went out of his way to cause embarrassment to the Anglo-Saxons. In the 1960s, he vetoed Britain’s entry into the European Economic Community (which became the EU) and France resigned from NATO in 1966. He visited Canada in 1967 and gave a speech in which he encouraged Quebec to seek independence. In the late 1960s, de Gaulle armed the Biafran rebels in the Nigerian civil war. They subsequently attacked British owned oil installations and British workers. De Gaulle felt it would be a good idea to break up Nigeria, because as a former British colony, it challenged France’s influence in the region. “We seem to be getting back into the bad old days of 1898 and 1899,” one astonished British official noted at the time. De Gaulle set the tone for French post-war foreign policy. In 1982, during the Falklands War when France officially offered its support to the UK it secretly also supplied Argentina with Exocet missiles, which were used to sink a British warship.

Howard believes that relations have improved in recent years. Recently leaked emails by Wikileaks show that President Macron's advisers realize that France will need American and British military support going forward. In private, the French don't have much faith in an EU army and view the Germans as pacifists who don't want to militarize. Those close to Macron realize they can't alienate Britain because its military is the most capable in Europe. Financially, France can’t afford to go it alone military and it needs access to American intelligence, equipment, and technology. In Mali in 2013, it put boots on the ground, but the U.S. provided backup and cash. However, Howard, believes that French suspicion of the Anglo-Saxons is so deeply ingrained that it still has a “Fashoda complex.”
En lire plus
5 personnes ont trouvé cela utile
Signaler un abus
Traduire les commentaires en Français

Shaun Kenney
3,0 sur 5 étoiles Wanted to like this book, but...
Commenté aux États-Unis le 18 novembre 2018
Achat vérifié
Howard does his best to explain why the French have been the hijackers of Anglo-American foreign policy in the West since the aftermath of the Second World War.  While he succeeds in defaming the French, one is hesitant to understand why Howard is successful at describing how the French imperial possessions were any less inconvenient than British ones, or how the Americans behaved any differently towards the British as we assumed the mantle of empire after Bretton-Woods.  Howard seems very convinced of his own arguments, but almost too convinced.