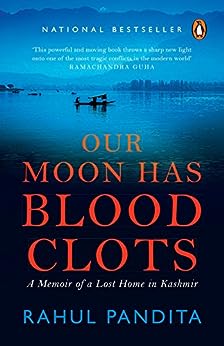 Our Moon Has Blood Clots: A Memoir of a Lost Home in Kashmir (English Edition) Format Kindle

Édition en Anglais de Rahul Pandita (Auteur) Format : Format Kindle
Afficher tous les formats et éditions
Sorry, there was a problem loading this page. Try again.
Rahul Pandita was fourteen years old when he was forced to leave his home in Srinagar along with his family. They were Kashmiri Pandits-the Hindu minority within a Muslim-majority Kashmir that was by 1990 becoming increasingly agitated with the cries of 'Azaadi' from India.
Our Moon Has Blood Clots is the story of Kashmir, in which hundreds of thousands of Pandits were tortured, killed and forced to leave their homes by Islamist militants, and forced to spend the rest of their lives in exile in their own country. Pandita has written a deeply personal, powerful and unforgettable story of history, home and loss.
En lire plus
Previous page
Next page

"This powerful and moving book throws a sharp new light onto one of the most tragic conflicts in the modern world. As a young boy, Rahul Pandita was exiled from his native Kashmir. Now, twenty years later, he returns to the prelude and aftermath of his exile, narrating his family's tortuous journeys with great sensitivity and skill. Every paragraph of this compelling memoir rings deeply true." --Ramachandra Guha --Ce texte fait référence à une édition épuisée ou non disponible de ce titre.

Rahul Pandita is a journalist and an author based in Delhi. He is a 2015 Yale World Fellow. He has also authored the bestselling Hello, Bastar: The Untold Story of India's Maoist Movement, and co-authored the critically-acclaimed The Absent State. He has extensively reported from war zones that include Iraq and Sri Lanka. In 2010, he received the International Red Cross award for conflict reporting.
He has been a speaker at international forums like the Carnegie Endowment Center, Stanford University, Brown University, State University of New York, Michigan University and the World Affairs Council. In 2014, he was a visiting fellow at the University of Pennsylvania's Center for the Advanced Study of India.
Pandita's last job was as editor (opinion and special stories) of the national English daily The Hindu.

Sheikh Basharat Hussain
5,0 sur 5 étoiles Truth longing and pain in every word
Commenté en Inde le 6 novembre 2017
Achat vérifié
A must read for all!
Words have just come from heart and carry all the pain, sufferings and longing. Mr. Rahul has put his heart on paper. A book which opened new horizon for me and gave a perspective to look. A book which you won't read in breaks but would read at a stretch till "_The world is what it is; men who are nothing, who allow themselves to become nothing, have no place in it
"
I wish we could change the past but I know we can't. However we can take lessons from our past and work presently for better future.

Deepti
5,0 sur 5 étoiles Tragic reality of the sufferings of Kashmiri Pandits
Commenté en Inde le 29 octobre 2017
Achat vérifié
"...and an earlier time when the flowers were not stained with blood, the moon with blood clots!" - Pablo Neruda, 'Oh, My Lost City'

Our Moon Has Blood Clots is very insightful and gives a firsthand account of experience of the author himself, who was among the exodus of Kashmir during 1990, at an age of 14. During 1990, there was mass movement of Kashmiri Pandits from Kashmir to Delhi, Lucknow, Lahore and Allahabad, living their ancestral home, their history and culture behind. The plight of Kashmiri Pandits is now an forgotten story. Our generation will never understand or will try to find out, what made approx. 3.5 lacs Kashmiri Pandits to pack their bags and leave the valley, never to return back and stay in their own country as refugees.

After reading this book, I read Curfewed Night by Basharat Peer. Both these books are set during the same period and tells the story of Kashmir with different approach. Both this book help us to understand that not only Kashmiri Pandits had a tragic life, but also the Muslims had to suffer the brutality of both the militants and Indian Army. The brutal killings, fleeing away from home, setting up a home in a place much different in culture, language in refugee camps in Jammu, these realities are narrated with much pain.

"Our home in Kashmir had twenty-two rooms", my mother used to say this thing to every person she met.

This narrates the experience of a mother, who was in exile, who lost her home and her pride, staying in refugee camps, in tents, sharing the tent with one other family.

The memories through a 14 year old teenager paints a vivid images. Women cramped in lorries travelling towards Jammu, a man raising his fist and telling them that, "you will die", overhearing a conversation of a group of boys, discussing distribution of Pandit's houses which will be empty soon.
"At least go inside and piss; like a dog, you need to mark your territory," one of the boys tells his mate. "It's over," Pandit's father, a government worker, says, "we cannot live here anymore."

Rahul Pandita mentions in the book that he kept a record of each and every Pandit killed in the Valley during the exodus, because he wanted people to know the story of each and every Pandit killed. The government and the media completely neglected the plight of Kashmiri Pandits. In 2008, Prime Minister Manmohan Singh announced a Rs. 1,618 crore package to facilitate the return of the Kashmiri Pandits in the Valley. Six thousand jobs were also announced for the Pandit youth in the Valley. Most of the jobs were never filled, due to the fear of being targeted by militants. The settlements provided to Kashmiri Pandits are cheap single-bedroom structures, with no drinking water facility. The real problem is harassment at work from their Muslim colleagues. Many Pandit employees don't receive their salaries on time.

This is an excellent book, full of true tragic stories, acquainting with Hindu-Muslim brotherhood, struggles of Kashmiri Pandits that forced them to flee to Jammu.

For those, who wants to know what happened in Kashmir during 1990s, and not just Kashmiri Pandits, I will suggest to read Curfewed Night by Basharat Peer. It gives an insight on the suffering of the Kashmiri Muslims during this period, how the Indian Army as well as the militants created problems for innocent Muslims. Kashmiri Muslims lives a threatened life in Kashmir because of both the Militants and the Indian Army and are tagged as militant where ever they go for being Kashmiri Muslim. It also gives an insight about how the Kashmiri youth are misguided by the Militants to cross the border and to go to Pakistan to get trained as an militant.
En lire plus
83 personnes ont trouvé cela utile
Signaler un abus
Traduire les commentaires en Français

Avinash Singh
4,0 sur 5 étoiles Powerful, revealing and disturbing
Commenté en Inde le 8 novembre 2017
Achat vérifié
Our moon has blood clots is a powerful and revealing memoir of the religious persecution of Kashmiri pandits. It leaves a deep impact on the reader. The author has penned down the painful story of Kashmiri pandit killings and their suffering. The book gives a closer look and a first person perspective of what happens when a particular community gets outnumbered when the demographic upperhand is with the Abrahamics. It also puts forward the aftermath of the Kashmiri exodus and gives a closer look of the life and conditions through which the pandits have lived and survived through. The details of the killings are a bit disturbing but it does give a clearer understanding of what the way they were driven out of their homes which no choice other than fleeing. Not only did they loose their homes, their work and occupation but a part of themselves. The pandits have been the unheard community for more than two decades. Their grievances hardly used to make it to the mainstream. It only recently that their suffering has been started to be documented with a much serious level.
En lire plus
37 personnes ont trouvé cela utile
Signaler un abus
Traduire les commentaires en Français

HG
5,0 sur 5 étoiles Excellent!
Commenté au Royaume-Uni le 28 juin 2013
Achat vérifié
Very well written! Rahul Pandita is a brilliant writer; the narrative of the book of course being very personal. I have now purchased another one of his books :).

This book presents a balanced and fairly accurate historical and cultural view of the happenings in the Valley most of which get obscured away from the general public by the Indian and foreign media and the Indian Government. I would recommend this to every person trying to understand the Kashmir issue!
En lire plus
Une personne a trouvé cela utile
Signaler un abus
Traduire les commentaires en Français

rima patel
5,0 sur 5 étoiles Truth revealed!
Commenté au Royaume-Uni le 19 avril 2016
Achat vérifié
The book was so gripping, so moving, so well written. It takes you into that time as if you were there witnessing it all. It has opened my eyes about the other side i.e. the Kashmiri pandit side which is kept secret by many Kashmiri Muslims that I have spoken too. I finished reading it the same day that I bought it. Thank you Rahul Pandita for this valuable insight!
En lire plus
Une personne a trouvé cela utile
Signaler un abus
Traduire les commentaires en Français
Afficher tous les commentaires
Retour en haut
Pour mieux nous connaître
Gagnez de l'argent
Moyens de paiement Amazon
Besoin d'aide ?
© 1996-2022, Amazon.com Inc. ou ses affiliés