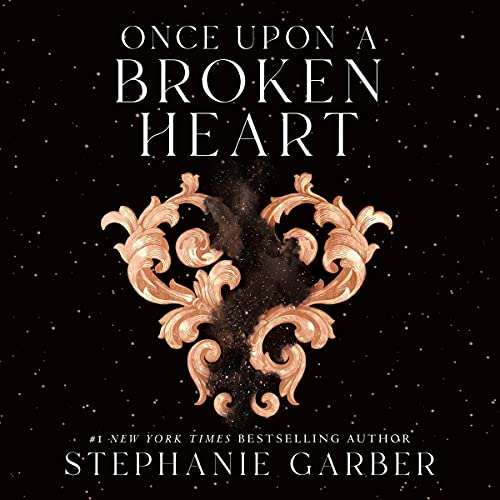 Once upon a Broken Heart

Once upon a Broken Heart marks the launch of a new series about love, curses, and the lengths that people will go to for happily ever after from Stephanie Garber, the number one New York Times best-selling author of Caraval.

For as long as she can remember, Evangeline Fox has believed in true love and happy endings...until she learns that the love of her life will marry another.

Desperate to stop the wedding and to heal her wounded heart, Evangeline strikes a deal with the charismatic, but wicked, Prince of Hearts. In exchange for his help, he asks for three kisses, to be given at the time and place of his choosing.

But after Evangeline’s first promised kiss, she learns that bargaining with an immortal is a dangerous game - and that the Prince of Hearts wants far more from her than she’d pledged. He has plans for Evangeline, plans that will either end in the greatest happily ever after, or the most exquisite tragedy....

“A dazzling mix of mystery, romance, and magic.” (Karen M. McManus, number one New York Times best-selling author of One of Us Is Lying)

“A wildly imaginative, romantic story where true love and deadly kisses collide and bargains with the Prince of Hearts come with a steep price. Once Upon A Broken Heart is an unputdownable fairy tale where Garber’s imagination sparkles like the Magnificent North.” (Kerri Maniscalco, number one New York Times best-selling author of Kingdom of the Wicked)

Lisa
5,0 sur 5 étoiles it was an amazing book that I enjoyed from start to finish!
Commenté au Royaume-Uni le 10 novembre 2021
Achat vérifié
⭐️⭐️⭐️⭐️⭐️ / 5 stars
Once Upon a Broken Heart is the first in a brand-new series that takes place in the Caraval world! This time, we follow Evangeline after she strikes a deal with Jacks. It is a story about bad decisions, broken hearts and unrequired love.

I’ve always been a huge fan of the Caraval series, so when I heard about more books in the same world, I couldn’t wait to get my hands on a copy. Bonus: we follow one of my favourite characters!

The magical atmosphere that I loved so much in the Caraval series really shown through! With the world expanding to the North there was so much room for more, and it definitely delivered! I think this might be my favourite book out of the four! I just didn’t want this story to end, and especially with the ending that was written! It left me gasping for more pages which weren’t there!

Evangeline is an amazing character who I fell for from the very first page! She is kind and brave. Her imagination and her love and believe in fairy tales are just amazing albeit a bit naïve in the beginning. I also loved how she interacted with Jacks. Jacks has been a favourite of mine for a long time. I just love a good villain/morally-grey character like him. He’s everything and more; shady, secretive, wicked and just has this vibe that makes me love him and root for him and everything! I don’t care if he’s bad, I want him to have it all haha.

The twists and turns in this story were all done so extremely well! You don’t really see the twist coming, other than that you get a feeling something is about to happen. They left me gasping and in shock in the best ways.

I would’ve liked to see what more the story could’ve brought me as a reader if it wasn’t classed as YA but NA. I can understand the Caraval series being YA, but Jacks feels more intense and maybe NA would suit him and the story a bit better.

Overall, it was an amazing book that I enjoyed from start to finish! I can’t wait to see what more the world and the characters will bring.
En lire plus
Une personne a trouvé cela utile
Signaler un abus
Traduire les commentaires en Français

BookishIdeas
5,0 sur 5 étoiles Magical!
Commenté au Royaume-Uni le 30 septembre 2021
Achat vérifié
Once Upon a Broken is an enchanting and captivating story following Evangeline and her quest for true love, except it’s not as simple as she hoped it would be. After making a deal with the famed and deadly Prince of Hearts, she sets out on an adventure beyond her imagination. The book is full of magic, curses, and deals with morally grey characters.

The world is so beautifully illustrated, full of whimsical imagery and magical scenery akin to the Caraval trilogy. Even though it’s not necessary to read Caraval I’d highly encourage that you do. While this is a separate story to the original trilogy, there is a lot of context, especially at the beginning that is briefly mentioned but not explained in detail - as it is featured in the trilogy. As someone who has read the original trilogy, I loved reading all of the mentions of what happened before this book and I feel like it would be a shame to miss it, and be spoiled for it if you haven’t read it yet.

As for the characters, the Prince of Hearts has to be my favourite. Jacks is such an interesting character and I was delighted to see Garber delve deeper into his personality and motives in this book. I love morally grey characters, and Jacks is a perfect reflection of that. His choices are not always orthodox but that is exactly what makes him such a compelling and exciting character. I cannot wait to the sequel to see where the story takes him next. 5/5 stars!
En lire plus
Une personne a trouvé cela utile
Signaler un abus
Traduire les commentaires en Français

Sammy
5,0 sur 5 étoiles Blown away
Commenté au Royaume-Uni le 30 septembre 2021
Achat vérifié
Blown away.
That's all i can say!
Thank you so much to @HODDERBOOKS and @netgalley for the chance to read this book in advance of its release. I had preordered this title long before I saw it on NetGalley and was intrigued.

Once upon a broken heart is filled with twists and turns that I never saw coming and that not sure I'll recover from anytime soon! My first foray into the world created by @stephanie_garber was an incredibly successful one and I have a feeling that she has just jumped her way into the category of one of my favourite authors. Her writing style is witty and beautifully descriptive, pulling together the image in your head with ease. The ending has floored me and I legitimately face palmed when I realised it was the end, I wasn't ready for it! I need more Jacks in my life! 🍏
En lire plus
2 personnes ont trouvé cela utile
Signaler un abus
Traduire les commentaires en Français

From the opening line -
"The bell hanging outside the curiosity shop knew the human was trouble from the way he moved through the door." - to the ending that snuck up on me and left me eager for more, Once Upon a Broken Heart is an absolute delight.

I could talk a lot about Evangeline (adorable, unsure, brave and foolish - in all the best ways!)and Jacks (brooding, dangerous, obviously bad for you - but since when did you listen!) and Marisol (kind and sweet despite her mothers best efforts...but that streak, ooof!), oddities and curses and magic and fates, but honestly, just read it!

Don't come looking for spoilers in the reviews, buy the book, read the book, love the book. That is all!

Kindle Customer helen j
5,0 sur 5 étoiles Breathtaking and captivating,fantasy fiction at its best.
Commenté au Royaume-Uni le 11 octobre 2021
Achat vérifié
Absolutely breathtaking read,loved every minute of my journey with Evangeline and her quest for true love.Evangeline has many adventures along the way ,Meeting Jacks and their slow burn romance is so captivating.The chemistry between Jacks and Evangeline builds up as do their understanding of each other's stories and how they have got to where they are.I give this book 5 stars because it has everything for fans of fantasy fiction,with magic,romance,adventure at every turn. The only small dislike is I wish book 2 was available now and for Jacks to show more of his obvious feelings for Evangeline.But it's been an amazing read,Thanks again Stephanie,superb,😊💕😀
En lire plus
Signaler un abus
Traduire les commentaires en Français
Afficher tous les commentaires
Retour en haut
Pour mieux nous connaître
Gagnez de l'argent
Moyens de paiement Amazon
Besoin d'aide ?
© 1996-2021, Amazon.com, Inc. ou ses filiales.