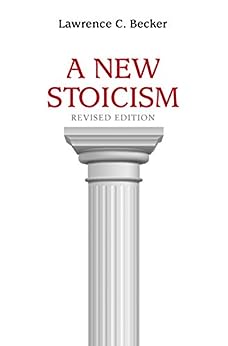 What would stoic ethics be like today if stoicism had survived as a systematic approach to ethical theory, if it had coped successfully with the challenges of modern philosophy and experimental science? A New Stoicism proposes an answer to that question, offered from within the stoic tradition but without the metaphysical and psychological assumptions that modern philosophy and science have abandoned. Lawrence Becker argues that a secular version of the stoic ethical project, based on contemporary cosmology and developmental psychology, provides the basis for a sophisticated form of ethical naturalism, in which virtually all the hard doctrines of the ancient Stoics can be clearly restated and defended.


Becker argues, in keeping with the ancients, that virtue is one thing, not many; that it, and not happiness, is the proper end of all activity; that it alone is good, all other things being merely rank-ordered relative to each other for the sake of the good; and that virtue is sufficient for happiness. Moreover, he rejects the popular caricature of the stoic as a grave figure, emotionally detached and capable mainly of endurance, resignation, and coping with pain. To the contrary, he holds that while stoic sages are able to endure the extremes of human suffering, they do not have to sacrifice joy to have that ability, and he seeks to turn our attention from the familiar, therapeutic part of stoic moral training to a reconsideration of its theoretical foundations.

Lawrence C. Becker is a fellow of Hollins University and professor emeritus of philosophy at the College of William & Mary. He was an associate editor of the journal Ethics from 1985-2000, and the editor, with Charlotte B. Becker, of two editions of the Encyclopedia of Ethics. --Ce texte fait référence à l'édition paperback.

Kyle B.
5,0 sur 5 étoiles An Explanation of New Stoicism
Commenté aux États-Unis le 27 avril 2018
Achat vérifié
I wasn't sure what to expect when reading this book at first. I've been thinking about and enacting some stoic ideas for probably about two years now, and wanted to see another way of looking at stoicism.

Becker's book is an explanation of stoic theory. This means he explains how to update Stoic theory (that is, the ancient Stoics) and how to come up with a usable, interesting virtue ethics theory with the backing of modern ideas. I find this project interesting, and also quite believable.

I especially liked how Becker goes over the logic of stoicism, and emphasizes important points of stoicism in ways I hadn't really thought about before. For example, he made much clearer to me how stoicism is both about having agent control (that is, being able to make decisions) in a deterministic (or quantum indeterministic) world, and how this is not in tension with each other as stoics understand what it means to be an agent. I also thought the ideas on stoic emotion were novel, and helpful for understanding how stoic thought.

If you think you might have some interest in stoicism, then this book is a good overview of what stoicism really is or should be. If you have no interest in stoicism, then I wouldn't recommend this book. (It's also not very focused on explaining "old" Stoicism, if that's what you're looking for.) It's great for getting a better understanding of the current stoicism project, but if that doesn't have any meaning for you, then I'm afraid you'll find this book boring.

For me, this was a great book as it provoked a lot of thought about my own life, and my own motivations and goals.
En lire plus
19 personnes ont trouvé cela utile
Signaler un abus
Traduire les commentaires en Français

me
1,0 sur 5 étoiles Classic Ivy League gasbag BS
Commenté aux États-Unis le 20 juin 2020
Achat vérifié
As a beginning Stoic I was hoping for a “modern philosophy … offered from within the stoic tradition but without the metaphysical and psychological assumptions that modern philosophy and science have abandoned” (including slavery, misogyny, “the gods”, and random aphorism writing style). This book may well be that but I found it unhelpful, to put it mildly. To put it more bluntly: turgid, pompous, overwrought, maddeningly free of practical examples, and gratingly self-congratulatory. Over 200 pages to define virtue and happiness? Then what? Where’s the beef? Classic Ivy League gasbag bullshit. This is the kind of thing that made me switch college majors from philosophy to neuroscience 50 years ago and never regret it.
En lire plus
10 personnes ont trouvé cela utile
Signaler un abus
Traduire les commentaires en Français

Amazon Customer
1,0 sur 5 étoiles Opaque writing style
Commenté aux États-Unis le 16 octobre 2021
Achat vérifié
I am sorry to echo what 'me' wrote in his/her review. After investigating stoicism for some time I recognize the rift between "Traditional" and "Modern" stoics, with the former embracing a god-like quality of nature as a universal driving force, and the latter, evolution. It's "providence vs atoms," to quote Chris Fischer of the excellent podcast The Traditional Stoic. For me, its atoms. Probably no grand design. William Irvine's Living The Good Life resonated with me with its update of this philosophy of life, so when I heard that Lawrence Becker was the father of Modern Stoicism I eagerly bought this book.

But it is almost incomprehensible, sadly,, due to a painfully arcane writing style, the most impressive I've seen in a while. Why? He clearly has much to say, but it might as well be Greek.

If I were a niche ethical philosopher delivering an important academic paper to peers at an academic conference, it would be fun and could be useful.

But I'm not, and sorry to say -- for me, -- it isn't and isn't
En lire plus
Une personne a trouvé cela utile
Signaler un abus
Traduire les commentaires en Français

Alicia Estrada
5,0 sur 5 étoiles Excellent
Commenté aux États-Unis le 18 août 2019
Achat vérifié
If you are a serious prokopton, and are not a firm traditionalist, this is a must-read. It helped dispel many misunderstandings that I had with the traditional writings - things that I had initially found unpalatable in the modern age with our current understandings in science, medicine and psychological development. To me, Becker doesn't so much as reinterpret the original doctrines, but instead explains them in a modern context, using current understandings in science, medicine, and psychological development, that is easier to digest.

Becker's New Stoicism may not be exactly compatible with traditionalist views, such as his casting off of the divine providential logos, but ultimately, I think it does stay (mostly) true to the original teachings and provides a strong, rigorous defense.