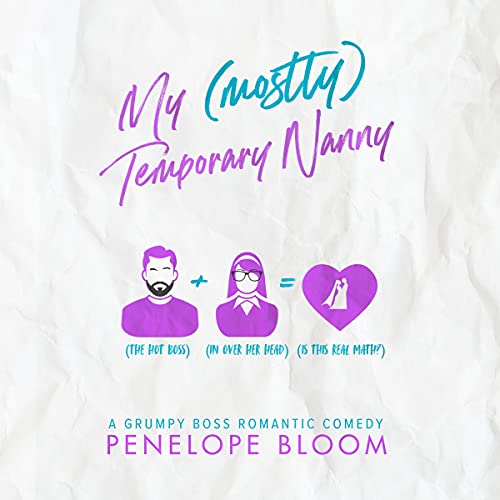 I will not think inappropriate thoughts about the nanny.

She’s just temporary, a momentary blip in my life.
Although I have to admit she’s quite attractive, as far as blips go.
She’s also the first person my son has ever actually liked, which has to count for something.

New plan: I will not...let myself get too attached to the nanny.

I’ve always been the kind of man to keep my plans flexible. Adaptation is key. Just like I’ve had to adapt to having a beautiful woman waiting for me when I get home every night - temporarily, of course.

My son deserves better than temporary. And I won’t dangle the prospect of a happy, complete family in front of him when I know the relationship wouldn’t last.

Beneath the innocent big doe eyes and the charming awkwardness, the nanny would turn out like the rest. She’d find some reason to leave. They all do. So I’ll make one final amendment to the plan. Yes, I may think inappropriate thoughts about the nanny and get attached to the nanny, but I will not fall for the nanny.

And if I do, I will deny it until my cold dead heart freezes over.

LindalooKam
5,0 sur 5 étoiles Brilliant
Commenté au Royaume-Uni le 25 novembre 2020
Achat vérifié
Brilliant yet again. Loved this storyline and the characters.
Loved the connection between Jack and Nolan.
Ben and Griff were absolutely adorable. Loved the way Ben did the Home Alone tricks. That was hilarious.
So happy they did become a family and that Ben and Griff would become Brothers as well as Nolan and Jack got their HEA
En lire plus
Signaler un abus
Traduire les commentaires en Français

P.Wedz
4,0 sur 5 étoiles Good read
Commenté au Royaume-Uni le 29 décembre 2021
Achat vérifié
Has all the feels of a romcom. Good read with some witty n funny moments. Was on a long trip so enjoyed being distracted by this story.
En lire plus
Signaler un abus
Traduire les commentaires en Français

XO2read
4,0 sur 5 étoiles Entertaining and funny
Commenté au Canada le 18 novembre 2020
Achat vérifié
I am a big fan of this author. This is a funny, romantic comedy set in the ‘Mostly’ series world. This has been a fun series to read. I laughed so hard in places,I almost fell,off my treadmill. I especially liked Chris from My Mostly Fake Wedding. If you like tom coms this is a special series and one not to be missed. This story is,charming, funny and well written.

I received a free copy of this book via Booksprout and am voluntarily leaving a review.
En lire plus
Signaler un abus
Traduire les commentaires en Français