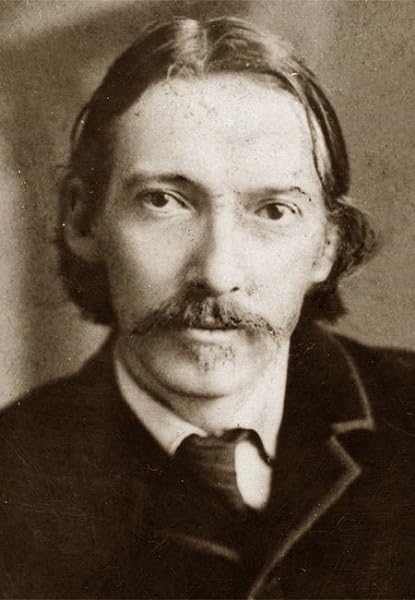 Here is the story of young David Balfour, whose miserly uncle cheats him out of his inheritance and schemes to have him kidnapped, shanghaied, and sold into slavery. But justice triumphs—after a spirited odyssey that includes a shipwreck, a hazardous journey across Scotland with a daredevil companion, intrigues, narrow escapes, and desperate fighting. Rich in action and characterization, this exhilarating novel was considered by Stevenson to be his finest work of fiction.

When I was growing up in Scotland, Robert Louis Stevenson was the first author whom I knew by name, and he remains the only one whom I can truthfully claim to have been reading all my life. From an early age, my parents read to me from A Child's Garden of Verses, and I soon learned some of the poems by heart.

I have a little shadow
that goes in and out with me,
And what can be the use of him
is more than I can see.

Perhaps I recognized, even then, Stevenson's unique gift for keeping a foot in two camps. While the poems vividly captured my childish concerns, somewhere in the margins shimmered the mystery of adult life. A few years later Kidnapped was the first chapter book I read, and I can still picture the maroon binding and the black-and-white drawings that illustrated David Balfour's adventures. At the age of seven, a book without pictures would have been out of the question, but, in fact, they turned out to be superfluous. I could imagine everything that happened just from the words on the page, although I must admit to the small advantage that the view from my bedroom window--bare hills, rocks, heather--was very much like the landscape of Kidnapped.

At first glance such early acquaintance might seem like a good omen for an author's reputation. In actuality, that Stevenson is so widely read by children has tended to make him seem like an author from who, as adults, we have little to learn. It is worth noting that his contemporaries would not have shared this prejudice. Nineteenth-century readers did not regard children's books as separate species. Stevenson's own father often reread The Parent's Assistant, a volume of children's stories, and Leslie Stephen, Virginia Woolf's father, writes of staying up late to finish Treasure Island.

Like the shadow of his poem, Stevenson's reputation has waxed and waned at an alarming rate. He died in a blaze of hagiography, which perhaps in part explains the fury of later critics. F.R. Leavis in The Great Tradition dismisses Stevenson (in a footnote, no less) as a romantic writer, guilty of fine writing, and in general Stevenson has not fared as well as his friend Henry James. People comment with amazement that Borges and Nabokov praised his novels. Still, his best work has remained in print for over a hundred years, and his is among that small group of authors to have given a phrase to the language: Jekyll and Hyde.

Besides our perception of Stevenson as a children's author, two other factors may have contributed to his ambiguous reputation. Although his list of publications is much longer than most people realize--he wrote journalism and travel pieces for money--he failed to produce a recognizable oeuvre, a group of works that stand together, each resonating with the others. In addition, the pendulum of literary taste has swung in a direction that Stevenson disliked and was determined to avoid: namely, pessimism. After reading The Portrait of a Lady he wrote to James begging him to write no more such books, and while he admired the early work of Thomas Hardy, he hated the darker Tess of the d'Urbervilles. The English writer John Galsworthy commented memorably on this aspect of Stevenson when he said that the superiority of Stevenson over Hardy was that Stevenson was all life, while Hardy was all death.

Robert Louis Stevenson (1850-1894) was born in Edinburgh. In the brief span of forty-four years, dogged by poor health, he made an enormous contribution to English literature with his novels, poetry, and essays. The son of upper-middle-class parents, he was the victim of lung trouble from birth, and spent a sheltered childhood surrounded by constant care. In 1880, he married Mrs. Fanny Osbourne, a woman ten years his senior. The balance of his life was taken up with his unremitting devotion to work, and a search for a cure to his illness that took him all over the world. His travel essays were published widely, and his short fiction was gathered in many volumes. His first full-length work of fiction, Treasure Island, was published in 1883 and brought him great fame, which only increased with the publication of The Strange Case of Dr. Jekyll and Mr. Hyde (1886). He followed with the Scottish romances Kidnapped (1886) and The Master of Ballantrae (1889). In 1888, he set out with his family for the South Seas, traveling to the leper colony at Molokai, and finally settling in Samoa, where he died.

John Seelye is a leading American Studies scholar and professor of English at the University of Florida at Gainesville. He is the author of The True Adventures of Huckleberry Finn, and Prophetic Waters: The River in Early American Life and Literature.

Claire Harman is a distinguished critic and author of biographies of Sylvia Townsend Warner (winner of the John Llewellyn Rhys Prize), Fanny Burney and Robert Louis Stevenson. Elected a Fellow of the Royal Society of Literature in 2006, she has taught English at the Universities of Manchester and Oxford and creative writing at Columbia University.
En lire plus
Commencez à lire Kidnapped (English Edition) sur votre Kindle en moins d'une minute.

"catherinebug_girl"
1,0 sur 5 étoiles A brilliant story, let down by very poor quality print production
Commenté au Royaume-Uni le 17 août 2018
Achat vérifié
Kidnapped, as written by Stevenson, deserves to be given 5 stars in this review - it is a wonderful story in it's own right, and offers the reader a vivid picture of the Highland landscape and a fascinating glimpse into Scotland's social history. The use of Scottish colloquialisms gives the book an unequivocal Scottish accent. It is a story of friendship, honour and adventure and I would highly recommend it.

So it is with regret that I am leaving a one star review. In this instance, the story has been grossly let down by the poor production quality of this particular edition. The book I received was printed in UK for Amazon, and I can only describe it as cheep and unprofessional. Some of the issues I found were:

- a poorly formatted table of contents;
- chapters that started at different points on the page. Some ran concurrently with the previous chapter, while others started at the top of a new page (as they should);
- the first letter of the first word of each chapter was missing;
- the text was poorly laid out on many of the pages;
- the footnotes giving the meaning of some of the Scottish colloquialisms used, were placed randomly within the text itself rather than at the bottom of the page, and some were missing altogether;

All-in-all, this was a very poor quality edition and while I do not think any of the story was missing, I had lost confidence in the rendering of it within three chapters. Thankfully, I had bought it for myself, rather than as a gift, because I would have been ashamed to give a book of such poor quality to anyone as a present.
En lire plus
17 personnes ont trouvé cela utile
Signaler un abus
Traduire les commentaires en Français

Chris Wright
1,0 sur 5 étoiles An Unreadable travesty
Commenté au Royaume-Uni le 4 août 2020
Achat vérifié
This is a nonsense - literally. The text is utterly garbled - it looks like it has been machine-translated into Chinese and back again.

Chris Wright
1,0 sur 5 étoiles An Unreadable travesty
Commenté au Royaume-Uni le 4 août 2020
This is a nonsense - literally. The text is utterly garbled - it looks like it has been machine-translated into Chinese and back again.

Mrs. L. Nichol
5,0 sur 5 étoiles A classic quest for justice.
Commenté au Royaume-Uni le 25 octobre 2015
Achat vérifié
I heard a lecture on Kidnapped recently and the speaker made the story of young orphan David Balfour, kidnapped and sent to sea after trying to claim his rightful inheritance from his wicked uncle, sound so thrilling and relevant to today's world that I reread it after a gap of 40 years and was not disappointed. I grew up believing it to be a "boys' book" but it's essentially a Scottish book dealing with the realities of growing up as the main character David Balfour takes us on a tour of Scotland in his quest for justice. The folk/fairytale aspect enhances the story and it becomes reminiscent of "Pilgrim's Progress" with all the characters David meets. The story also inspires the reader's interest in Scottish history and politics forcing us to think about the Jacobites and the significance of the Campbell's. The themes are relevant to teenage (male and female) readers - rites of passage; family and friends; loyalty with violent action - but equally relatable by adults. If, like me, you read it ages ago, I urge you to reread it as it will feel like meeting an old friend.If you are new to the novel, you'll enjoy the journey and you'll get to know Scotland a wee bit more too!
En lire plus
20 personnes ont trouvé cela utile
Signaler un abus
Traduire les commentaires en Français

Ken of Shavington
4,0 sur 5 étoiles A 2nd reading some 60 years after the 1st
Commenté au Royaume-Uni le 14 avril 2020
Achat vérifié
I 1at read this book whilst at primary school and, on a whim, decided to re-read it during the current lockdown. To my surprise I found that I really enjoyed the book. It is a cracking story though obviously the prose is a little dated. I can't recall how I managed with the innumerable old_Scots words as a child but they presented little trouble this time round.

Not sure if I will read other books from my childhood: can you still find Biggles?
En lire plus
2 personnes ont trouvé cela utile
Signaler un abus
Traduire les commentaires en Français
Afficher tous les commentaires