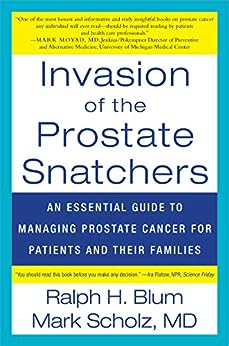 Invasion of the Prostate Snatchers: An Essential Guide to Managing Prostate Cancer for Patients and their Families (English Edition) Format Kindle

Assume you just learned that you have prostate cancer. As an uninformed layperson you reckon your demise is imminent. All of a sudden you are on death row. Your spouse and family feel this too. Your wife and children wonder about losing their provider. Your friends will look at you differently. So will your insurance company. Now factor in your own shock and horror, the unbalancing and disorienting realization that you have cancer. You have just received the worst news of your life; only moments before you were a normal healthy person. Now you’re wondering about splurging on a last set of golf clubs or planning a final get-together for the family in the Bahamas. Feelings of profound grief
and terror flood in. Rational thought is gone, emotion takes over.

Under these pressured circumstances the urologist smoothly assumes leadership. He seizes the wheel and you become the passenger. Disoriented, you have no idea, no idea at all, of what you have just done. You have become one more dutiful lamb being herded into the pen. You’ve already had one intimate experience with this stranger. You have already trusted him by allowing him to poke needles into what one woman called “the true heart of the male.” What is there to deter you now from trusting him to recommend treatment based on his findings? Why wouldn’t you trust him now to prescribe his treatment of choice? It simply doesn’t occur to you to think otherwise. The hook has been set. What usually happens is that you uncritically proceed to make an appointment for surgery. --Ce texte fait référence à l'édition hardcover.

MARK SCHOLZ, MD, 54, is board certified in medical oncology and internal medicine. He has been treating men with prostate cancer exclusively since 1995. Medical Director of Prostate Cancer Specialists, Inc., and Executive Director of the Prostate Cancer Research Institute, Dr. Scholz is also an associate clinical professor at the University of Southern California School of Medicine’s Department of Oncology and a consultant to the Journal of Urology. Dr. Scholz volunteers for the Internet list “Patient to Physician,” found via Resources at www.pcri.org.

RALPH H. BLUM, 77, a cultural anthropologist and author, graduated Phi Beta Kappa from Harvard University with a degree in Russian Studies. His reporting from the Soviet Union, the first of its kind for The NewYorker (1961—1965), included two three-part series on Russian cultural life. He has written for various magazines, among them Reader’s Digest, Cosmopolitan, and Vogue. Blumhas published three novels and five nonfiction books on the oracular tradition, beginning with The Book of Runes. He has been living with prostate cancer, without radical intervention, for twenty years. --Ce texte fait référence à l'édition hardcover.

“A provocative and frank look at the bewildering world of prostate cancer, from the current state of the multibillion-dollar industry to the range of available treatments…prostate cancer is a dark and mysterious country, and Mr. Blum and Dr. Scholz are good, levelheaded guides through these thickets. And in telling men to slow up and take a deep breath after they learn they have prostate cancer, they provide an invaluable service. I wish I had had this book back in 2008.”—Dana Jennings, The New York Times

“An indispensable guide for newly diagnosed and aging males, and their loved ones.”—Booklist

“Prostate cancer, when it is the ‘favorable risk’ variety—about 90% of the time—presents a perfect opportunity to use mainstream and alternative medicine together. In their excellent book, authors Scholz and Blum give a compelling demonstration of this integrative approach to healing.”—Andrew Weil, MD, Director, University of Arizona Center for Integrative Medicine, and author of six New York Times best sellers, including Spontaneous Healing and Natural Health, Natural Medicine

"Invasion of the Prostate Snatchers is a must read for anyone who wants to get a glimpse of what the practice of future medicine needs to be. Dr. Scholz cares not only about the scientific and clinical evidence but also, very deeply and very personally, about his many patients. We need professionals like Scholz if ever we are to move forward in our current health care programs." —T. Colin Campbell, PhD, Jacob Gould Schurman Professor Emeritus of Nutritional Biochemistry, Cornell University, and co-author of The China Study

“Invasion of the Prostate Snatchers is a masterpiece of eye-opening science that promises to enhance the lives of thousands of men diagnosed with prostate cancer every year. I give it my highest recommendation." —Christiane Northrup, M.D., ob/gyn physician and author of the New York Times bestsellers: Women's Bodies, Women's Wisdom and The Wisdom of Menopause

“If Scholz and Blum do nothing more than change the way so many men think about their prostate cancer from ‘a deadly disease’ to a ‘Low Risk Condition,’ they will have served us well.” —Larry Raithaus, MD, Urologist

“Some might consider it a mistake to respond with humor when you are faced with cancer. I say it takes courage, and is a sorely needed remedy—especially when the humor is combined with good sense and state-of-the-art information. As a clinical psychologist who specializes in men's health issues, I say, Bravo, Scholz and Blum!”—Aaron Kipnis, PhD, Author of Knights Without Armor and What Women and Men Really Want

“There are at least half a million reasons—the number of prostate cancer diagnoses in the U.S. and Europe—to read this engaging diary/resource written from the alternating perspectives of doctor and patient.... Good advice based on the brave experiences of two compatible souls and medical mavericks.”—Publishers Weekly

Satisfied Customer
5,0 sur 5 étoiles The book saved me going through unnecessary prostate biopsies and treatment
Commenté au Royaume-Uni le 14 janvier 2020
Achat vérifié
Unknown to me my urologist was taking my PSA levels and in 2012 he said he would like to give me a biopsy and gave me a date for this and at the same time he suggested that I could undertake radiation treatment. I was taken aback because he mentioned radiation treatment before he had undertaken the biopsy. I was troubled by eagerness to give me invasive treatments without any testing. I cancelled the transrectal biopsy, which regularly causes sepsis and has probable led to some deaths. On the recommendation of the book I asked for a PCA3 test an and MRI scan. He said it was unnecessary. He tried on three successive occasions to get me to take a biopsy and again I asked for an MRI scan in 2016 because MRI scans had now been adopted by the NHS (years after MRI scans had been recommended by this book), he again refused. Finally, in 2017 he gave me an MRI scan and it showed nothing. Professor Richard Albin who was the first to isolate PSA in the 1970s but did not develop the PSA test because he said it was a very inaccurate test. He also said that the transrectal biopsy and Gleeson cancer grading's accuracy were also both poor. None of these tests can differentiate between non aggressive cancers, which will not kill you and aggressive cancers. Retrospective studies on thousands of patients have shown that those who underwent PSA tests etc. did not do much better than those who were not tested. If I had not read this book I would probably had my prostate 'snatched' unnecessarily and I could have been left with the terrible side effects that can accompany surgery.
En lire plus
2 personnes ont trouvé cela utile
Signaler un abus
Traduire les commentaires en Français

Bellalugo
5,0 sur 5 étoiles if you have prostate cancer you must read this!
Commenté au Royaume-Uni le 14 décembre 2010
Achat vérifié
I cannot reccommend this book too highly!...If you have just had that dark news from the medics that you have prostate cancer, then before slavishly following their very partial advice, count to twenty, then read this friendly accesible and hugely informative book around the whole topic of prostate cancer. Then try to find a specialist or GP who can help you navigate the various options and treatments that are now available. With any serious medical condition I think as a patient the more informed you are the better you are able to become an active participant in your treatment and that can only help you through what can be a terrifying and grim experience.
En lire plus
7 personnes ont trouvé cela utile
Signaler un abus
Traduire les commentaires en Français

Jacques Arongaus
5,0 sur 5 étoiles To understand better the prostate and to not fall into traps set by unscrupulous doctors !
Commenté au Canada le 30 juillet 2018
Achat vérifié
Amazing info. It saved me from having a dangerous and potentially cancer spreading prostate biopsy that would be done by a hush up doctor. A must have for all the prostate sufferers ! Closer examination by another conscious doctor, he agreed to the info presented in this awesome book !
En lire plus
Signaler un abus
Traduire les commentaires en Français

Ezra
5,0 sur 5 étoiles Best Book on Prostate Cancer
Commenté au Canada le 22 janvier 2014
Achat vérifié
This book was the only one that seriously addresses the problem of men's overreaction to the startling news of Prostate Cancer and its overtreatment. After reading this book one can better understand why Active Surveillance is becoming the treatment of choice, and why a US Medical Advisory Panel recently advised against PSA testing -although I believe it is the wrong approach.
A must read for those with non aggressive Prostate Cancer that 85% of diagnosed men have. This book helped me make the decision to avoid surgery and find a Prostate Oncologist, Dr. Snuffy Myers, and to go to St Michaels Hospital in Bad Aibling Germany in 2011 to have my cancer successfully treated there with Hyperthermia plus six months of Hormone treatment.

CharlesCohen
1,0 sur 5 étoiles A dangerously unbalanced view of prostate cancer
Commenté au Canada le 12 mai 2011
Achat vérifié
As a prostate cancer victim, and with surgery three years in the past, I have one piece of advice:

. . . Don't read this book as your first (or only) book on prostate cancer and its treatment.

Its language is inflammatory. Its discussion of treatment options (including 'active surveillance') is unbalanced. Its discussion of "post-treatment sexuality" is almost non-existent. The book, especially the chapters by Ralph Blum, will scare you silly -- and that's not a good frame of mind for decision-making.

If you want to learn something about prostate cancer because you've been diagnosed, visit a local PCa support group (see the USTOO website or the American Cancer Society website for a list).

Two books I'd suggest as being much better balanced, and much less driven by irrational fear:

Saving Your Sex Life: A Guide for Men with Prostate Cancer

Those two will give you a better picture of the disease, and its treatments, and their side-effects, than "Prostate Snatchers".