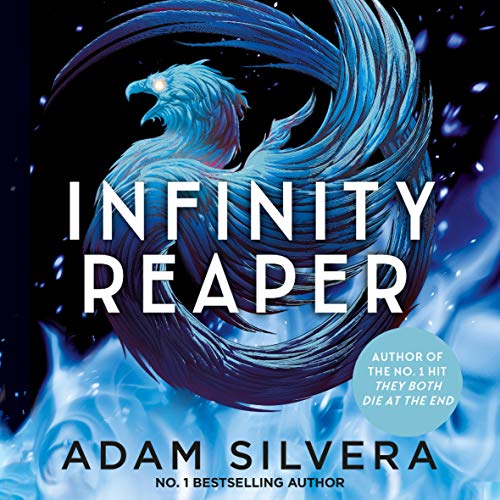 From the author of the international number one best seller They Both Die at the End.

In this gripping sequel to the New York Times best-selling Infinity Son, Adam Silvera brings a diverse cast of heroes and villains to life in an alternate New York where some people are born with powers, while others steal them from the blood of endangered magical creatures.... For fans of Cassandra Clare, Leigh Bardugo and Sarah J Maas.

Emil and Brighton defied the odds. They beat the Blood Casters and escaped with their lives - or so they thought. When Brighton drank the Reaper's Blood, he believed it would make him invincible, but instead the potion is killing him.

In Emil's race to find an antidote that will not only save his brother but also rid him of his own unwanted phoenix powers, he will have to dig deep into the very past lives he's trying to outrun. Though he needs the help of the Spell Walkers now more than ever, their ranks are fracturing, with Maribelle's thirst for revenge sending her down a dangerous path.

Meanwhile, Ness is being abused by Senator Iron for political gain, his rare shifting ability making him a dangerous weapon. As much as Ness longs to send Emil a signal, he knows the best way to keep Emil safe from his corrupt father is to keep him at a distance.

The battle for peace is playing out like an intricate game of chess, and as the pieces on the board move into place, Emil starts to realise that he may have been competing against the wrong enemy all along....

Donna Bull
4,0 sur 5 étoiles Wonderful continuation of the series!!
Commenté aux États-Unis le 1 avril 2021
Achat vérifié
"I have to become a pawn who takes down the king. To outsmart the man who fools the world without a single shifter's muscle."

Infinity Reaper picks up immediately at the end of Infinity Son and from there it just doesn't take a breath!! If you haven't read Infinity Son then you may not want to continue reading as it's hard not to be spoilery. Brighton has downed the potion that was meant for Luna and essentially all hell continues to break loose for all the members of the Spell Walkers. Things don't turn out quite as Brighton planned, Ness has been taken back by his father and Emil has to deal with the fracture in the ranks of the Spell Walkers. So many different events set in motion and the pacing just keeps getting ramped up as you go back and forth between the different POV's. So many different reveals about the main characters but also Bautista, Keon and Cordova, plus some connections that I definitely wasn't expecting. I really enjoyed the addition of the Halo Knight characters Tala, Wyatt and of course Nox!! Was really torn because I loved Emil and Wyatt together but also so want Ness and Emil together as well! The one thing I have to say is that I have never wanted to smack a character upside the head as much as I do Brighton. I mean, he is working really hard to be just a complete arseling, and it will have to be quite the redemption in book 3 if I am to be bothered at all to care if anything bad happens to him. He's your brother dude!! And Adam does it again with that ending.......really!?!?!! Can't wait to see how all of this plays out in the final book.
En lire plus
3 personnes ont trouvé cela utile
Signaler un abus
Traduire les commentaires en Français

Angela Alvarez Velez
5,0 sur 5 étoiles Does not suffer from Middle Book Syndrome
Commenté aux États-Unis le 22 juin 2021
Achat vérifié
It's hard to follow up on a fast-paced novel and leave room for another one without writing a disappointing book that reads like a bridge that exists with no purpose other than to charge a toll fee. That is not the case with this one. This book is as action and information packed as the first one and sets up the next one nicely, leaving the reader the feeling that you HAVE TO KNOW WHAT HAPPENS NEXT but without feeling that you were just strung along for a book's worth of teasers.
What I loved in the first book holds true in the second. The language is fresh and feels very young, very now. I love the treatment of diverse characters, both ethnic and sexual. I love that coming out isn't a plot point. People are gay, bi, straight, deal with it, moving on. I love how the handle the struggles of adoption from a place that seems genuine. Silvera doesn't shy away from the pain or the awkwardness but leans right in a presses all the sore spots until some truth comes out. I personally loved the loving way he references LatinX culture, particularly Colombia. As a Colombian myself, I tend to cringe when I see my country's name in a book because I'm expecting words like narco, guerrilla, bomb, drugs, etc. to follow. But that is not the case here, and it was refreshing and honestly such a relief. Great for upper middle grade and older, underneath the action and the fights and the magic there is a wonderful discussion of what power means, what family is, what friends do, and what humans need to strive for.
En lire plus
Une personne a trouvé cela utile
Signaler un abus
Traduire les commentaires en Français

Kali Smyers
5,0 sur 5 étoiles THICC book love!! (SPOILER WARNING: character betrayal)
Commenté aux États-Unis le 16 avril 2021
Achat vérifié
This has been my most anticipated 2021 read, and it did NOT disappoint! Most of the plot twists were amazing, and I was hooked the entire time. The LGBTQ+ rep was amazing, especially with how casual it was! I already love Adam Silvera and his work (They Both Die at the End and Infinity Son), so I knew he wouldn’t disappoint!

Brighton turning into the “surprise cliffhanger villain” wasn’t much of a surprise. I guess that was the point, since the target audience is for young adults, but I wished the book could’ve been more subtle about the foreshadowing. Like throughout the story, they made it obvious that Brighton’s narcissism was gonna make him change sides in the end, but still tried to make it seem like he was the “good guy”. It irked me how selfish and uncaring his thoughts were, like he was still aware of how harsh his thoughts, but in the end he was like “okay, my brother is weak, I’m dumping my dream girlfriend, and relying only on my online followers as ‘support’”. Great story still, but it’s safe to say he was my least favorite character.

Even with all of that, I can’t WAIT for the next book in this amazing series!!
En lire plus
Une personne a trouvé cela utile
Signaler un abus
Traduire les commentaires en Français

Customer
2,0 sur 5 étoiles Long and Drawn Out
Commenté aux États-Unis le 12 juillet 2021
Achat vérifié
The book is all over the place going from one person point of view to another. I think it has wonderful things that could make great stories, but the author seems to be just going with a cash grab to write as many books as possible. I am getting tired of this style of writing where the stories never wrap up so there are more and more books.
En lire plus
2 personnes ont trouvé cela utile
Signaler un abus
Traduire les commentaires en Français