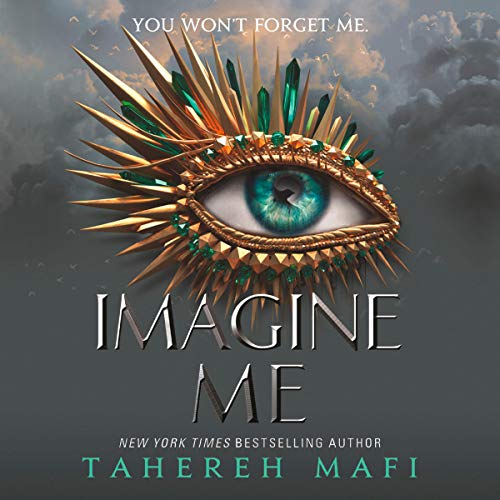 The book that all Shatter Me fans have been waiting for is finally here. The finale of Tahereh Mafi's New York Times best-selling young-adult fantasy series perfect for fans of Sarah J. Maas, Victoria Aveyard's The Red Queen, Stranger Things and Leigh Bardugo's Six of Crows.

Juliette Ferrars. Ella Sommers. Which is the truth and which is the lie?

Now that Ella knows who Juliette is and what she was created for, things have only become more complicated. As she struggles to understand the past that haunts her and looks to a future more uncertain than ever, the lines between right and wrong - between Ella and Juliette - blur. And with old enemies looming, her destiny may not be her own to control.

The day of reckoning for the Reestablishment is coming. But will the choice of which side to fight on be hers?

Tahereh Mafi is the New York Times best-selling author of the Shatter Me series which has been published in more than 30 languages around the world. She was born in a small city somewhere in Connecticut and currently resides in Santa Monica, California, with her husband, Ransom Riggs, fellow best-selling author of Miss Peregrine's Home for Peculiar Children, and their young daughter. She can usually be found overcaffeinated and stuck in a book.

Billie Beddall
4,0 sur 5 étoiles SPOILERS
Commenté au Royaume-Uni 🇬🇧 le 14 janvier 2021
Achat vérifié
I was a bit apprehensive about reading this final book in the series - as many reviews had been mostly negative and focused on the same issues.
One problem other readers had was the book being split into POV of Juliette and Kenji rather than Juliette and Warner.
HOWEVER
I actually liked this choice. This way we were getting a wider perspective of different events happening within the story, and because Juliette and Warner are usually always together I feel chapters from their POV would have just been incredibly repetitive.
However - Kenjis chapters make Juliette just fade into the background a little. She is the main character - this is her story, and even though she technically remains at the centre of everything that happens - it’s hard to keep that focus on her. It’s hard to explain, but Juliette becomes a bit irritating and dull and Mary-sue.
But maybe that’s just me.
The story becomes incredibly dark which I like, however it does feel a little misplaced considering the events of the first trilogy and at times it is evident that this second trilogy was never meant to be an original expansion.
However I did like it. I liked the darkness and I liked a lot of the new developments at play.
Another issue other readers had was Juliettes attraction to Anderson, but it doesn’t really seem weird or misplaced within the context.
Juliette has her memories swiped and becomes Anderson’s own super soldier, she remembers nothing of Adam or Warner at this point but it seems natural she would find the father of both her boyfriends attractive. It’s a messed up situation but that is the whole point and it doesn’t get nearly as messed up as it could - which I was expecting it too, although with this part of the story it did feel like Mafi was incorporating some real misplaced Fifty Shades of Grey Dom/sub relationship in there because why the hell not I guess.

Lauren
4,0 sur 5 étoiles Needed Aaron POVs in this 🥺
Commenté au Royaume-Uni 🇬🇧 le 24 septembre 2022
Achat vérifié
I loved it but felt like I hated so much at the same time. Like how much stuff does one couple need to go through. And ALSO AN ENTIRE BOOK WITH NO AARON POV. I felt so uncomfy with the whole Anderson thing, like when I thought I couldn’t hate him more, although i was happy to see him uncomfy 😂 I loved the banter between Aaron and Kenji, again my heart hurt so much for Aaron and Juliette, it didn’t really wrap up as a complete ending but I guessed that would happen more in the last novella. I did surprisingly enjoy this series and I’m gutted it’s over.
En lire plus
Signaler un abus
Traduire les commentaires en Français

Victoria Pamela
5,0 sur 5 étoiles What a read!
Commenté au Royaume-Uni 🇬🇧 le 2 juin 2021
Achat vérifié
I am lost for words at just how much I loved Imagine Me.

If I thought any of the other books in this series were full of angst, drama, amazing twists and turns or endings I never saw coming Imagine Me just knocked them all out of the water.

Juliette and Kenji's story telling keeps you literally hanging on to the edge of your seat.every page you turn pulls you further and further into their stories until you are completely lost in every thing going on. I honestly thought I could see how this series was going to end or at least the path it was going to take but boy was I wrong. And you know I'm not mad at that at all. They will definitely keep you on your toes and guessing about whats coming.

I would recommend this series to anybody, I have that much love for these books
En lire plus
Signaler un abus
Traduire les commentaires en Français

bonny
5,0 sur 5 étoiles I love this series!!
Commenté au Royaume-Uni 🇬🇧 le 16 mars 2022
Achat vérifié
I haven't been able to put this series down. I have loved all of them. I love the way it's written. I love the characters. I wish I had known about the novellas before I started so I could have read them in order but it just means Ill have to read them again!
En lire plus
Une personne a trouvé cela utile
Signaler un abus
Traduire les commentaires en Français

Ella
3,0 sur 5 étoiles Fun but I missed Warner
Commenté au Royaume-Uni 🇬🇧 le 27 mars 2022
Achat vérifié
So in the end I did not enjoy this reboot of the series quite as much - there was just something about the Warnette will they/won't they angst in the original trilogy - but I still had a fun time with these characters. Although I will also say this book had an extra star removed for no Warner POV, a feral Warner perspective would have been iconic to read about.
En lire plus
Signaler un abus
Traduire les commentaires en Français
Afficher tous les commentaires