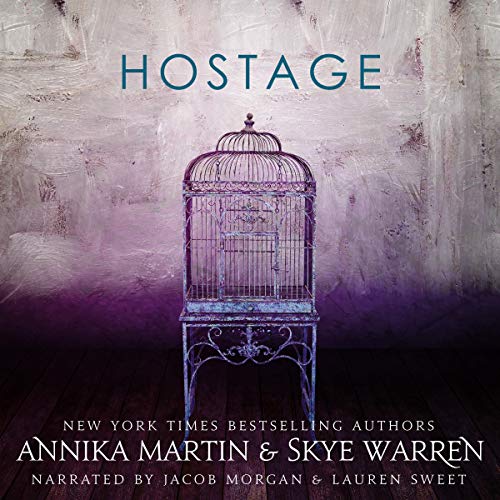 I'd never even kissed a boy the night I met Stone. The night I saw him kill. The night he spared my life. That was only the beginning.

He turns up in my car again and again, dangerous and full of raw power. "Drive," he tells me, and I have no choice. He's a criminal with burning green eyes, invading my life and my dreams.

The police say he's dangerously obsessed with me, but I'm the one who can't stop thinking about him.

Maybe, it's wrong to let him touch me. Maybe, it's wrong to touch him back. Maybe, these twisted dates need to stop. Except, he feels like the only real thing in my world of designer labels and mansions. So, I drive us under threat, until it's hard to remember I don't want to be there. Until it's too late to turn back...

Hostage is a dangerous stand-alone romance by The New York Times best-selling authors Skye Warren and Annika Martin. It's set in the same world as Prisoner, but can be listened to separately!

Angie (L)
5,0 sur 5 étoiles An excellent story worthy of the five stars awarded
Commenté au Royaume-Uni le 10 mars 2018
Achat vérifié
Stone didn’t have much of a childhood , more or less he was abandoned by his family he found himself together with other boys from similar backgrounds being held captive in a basement of a house where parties were held by very influential people . Stone was the eldest of these boys they looked to him for guidance which he gave to the best of his ability . When they were “needed” to attend the parties they were fed drugs and taken up from the basement and abused horribly by any of the vile sick adults that would pay the price to do so ,many of them were in positions of authority and others from well known wealthy influential families . When they finally escaped they did their best to survive ,but one thing was certain as a group they vowed that they would do everything in their power to hunt down the very influential men who had set it up and exact their revenge . Things were progressing they would get little snipbits of information by beating and then killing the people involved usually Stone would do this as many of the others didn’t have the stomach to do it . They did this under the radar of the law as the police knew about them but had no idea where they lived ,the gang went to elaborate measures to keep their home a secret . Everything started to change though when after cornering one person at a sixteenth birthday party ,Stone met Brooke whose party it was , she had stepped outside to get a breath of air and had witnessed the severe beating & interrogation of the man , realising that he’ll have to take her as well he bundles her into the vehicle and makes his getaway . At first Brooke is horrified at what she’s witnessing and after a time he lets her go with a warning to keep her mouth shut , obviously as she was abducted her parents had called the police and she had to answer the questions to her best ability without incriminating Stone on her return . Knowing that he must stay away from her Stone is finding it increasingly difficult and continues to watch her and from time to time he’d “abduct” her , but it wasn’t an abduction in the true sense of the word ,he just wanted to be with her and by now Brooke was staring to have feelings for him as well. As they get close she learns what happened in his past which horrifies her mire worryingly information has come to light that right now there’s another house with children trapped like they were so the race is on to get to them quickly . Unfortunately on one such meeting Brooke learns the Nickname of one of the people that they are looking to speak to and that frightens her knowing that it will lead to another death , Brooke has heard the nickname offen and as it’s someone close to her she sets out to find the truth . A lot goes on in this story it’s one heck of a rollercoaster ride until the end . Having read quite a few of Skye’s books I knew It was going to be an excellent read ,it’s dark gritty hard hitting drama , with subject matter that is difficult to read about ,but as always it always it has an extremely hot love story running throughout .
En lire plus
4 personnes ont trouvé cela utile
Signaler un abus
Traduire les commentaires en Français

KRISTA WEBSTER
4,0 sur 5 étoiles Stones Story
Commenté au Royaume-Uni le 15 mars 2018
Achat vérifié
Thoroughly enjoyed this book. In Prisoner we learnt something about all the boys and how Stone was their leader, now we have his story. He meets Brooke on her sixteenth birthday and then over the next couple of years he keeps taking her - hence the title of the book "Hostage". He has never been loved or cared for and she slowly shows him what it is like. He has never trusted anyone other than the other boys and finds it extremely hard to let her in. She has also had her problems growing up and has to fight her fears of her strong feelings toward Stone. He is hell bent on revenge for what happened to them all and is so raw and wild throughout the book. It was great to catch up with Grayson and Abby and all the other boys. Many of the questions from the other book are answered in this one and the authors provide a great insight into how the boys are feeling. I loved how Stones character is developed through the book and how the authors show the reader all his different sides. This quote totally sums him up - "I'm the winter nobody ever saw coming". These two books are full of emotion and show how a terrible situation can affect people differently.
En lire plus
2 personnes ont trouvé cela utile
Signaler un abus
Traduire les commentaires en Français

Asta Gedviliene
5,0 sur 5 étoiles I want more!
Commenté au Royaume-Uni le 10 février 2018
Achat vérifié
It’s incredible Stones and Brooke’s story. A true jewel. Edgy, provoking and erotic, sometimes twisted. YET this love was saving them both. Stone met his little bird on her birthday, Broke bravely attempted to stop him killing the monster from his past. That day she changed his life. Broke was just 16. But the connection with a girl who he held in his arms before drowning her, ripped his heart. Slither of humanity awakened. It stopped him killing this hostage, made him obsessed with her. Stone’s dark past intrigued and scared her, but he was her light, freedom. He showed her how to live on the edge, explore her passion. The brutal man had gentleness and heart, even if he lived for revenge. This twisted love story is very romantic. Healing relationship that touches this man with love, and the possibility of redemption. I loved it. It was beautiful and gritty. Yet Stone proved to have a heart that Broke nurtured to life with care and tenderness. It is unputdownable read. I fell in love with these series, can’t wait for next one.
En lire plus
Signaler un abus
Traduire les commentaires en Français

SUZY BAXTER / Suzy's Book Shelf
5,0 sur 5 étoiles DARK GRITY FANTASTIC READ
Commenté au Royaume-Uni le 2 février 2018
Achat vérifié
https://www.amazon.co.uk/dp/B079D88GDJ/ref=cm_cr_ryp_prd_ttl_sol_0
WHAT AN AMAZING BUT AWFUL SUBJECT MATTER THIS BOOK WAS.
I had already read Prisoner, Grayson's and Abbies story loved that, this stepped it up a notch, dark gritty, unimaginable pain.
Difficult subjecy matter to make into a good story, yet Skye Warren and Annika Martin, did it with class
well done.
I LOVED STONE, violence is not always the answer but sometimes is necessay.
Brooke a beautiful broken young lady, her wings trapped, until Stone set her free
En lire plus

SUZY BAXTER / Suzy's Book Shelf
5,0 sur 5 étoiles DARK GRITY FANTASTIC READ
Commenté au Royaume-Uni le 2 février 2018
https://www.amazon.co.uk/dp/B079D88GDJ/ref=cm_cr_ryp_prd_ttl_sol_0
WHAT AN AMAZING BUT AWFUL SUBJECT MATTER THIS BOOK WAS.
I had already read Prisoner, Grayson's and Abbies story loved that, this stepped it up a notch, dark gritty, unimaginable pain.
Difficult subjecy matter to make into a good story, yet Skye Warren and Annika Martin, did it with class
well done.
I LOVED STONE, violence is not always the answer but sometimes is necessay.
Brooke a beautiful broken young lady, her wings trapped, until Stone set her free

JJ
5,0 sur 5 étoiles Breathtaking.
Commenté au Royaume-Uni le 9 février 2018
Achat vérifié
Brilliant story, loved it.
I read Prisoner first which was excellent and the immediately bought this. I enjoyed how the story was put together and i just wanted to hug Stone even though he was a killer. There were just enough twists and turns to keep me occupied and i loved how the story developed towards the end. Didn't want it to end.
Just brilliant.
En lire plus
Signaler un abus
Traduire les commentaires en Français
Afficher tous les commentaires