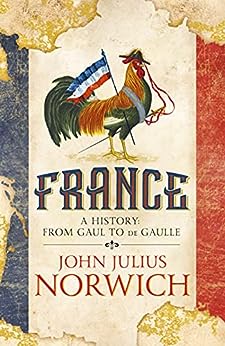 Always a warm, welcoming guide, John Julius Norwich takes us on a historical tour of France from its earliest days to the twenty-first century . . . A highly entertaining introduction to a fascinating nation (History Revealed Magazine)

For his final book, the late Norwich tackled the dauntingly vast subject of two millennia of French history with admirable lightness and urbanity. There is the odd whiff, probably deliberate, of 1066 and All That - "The Capetians had steadily built up France, transforming it from a Carolingian custard into a nation" - and his comic footnotes deserve a review of their own (The Daily Telegraph, Summer Reads)

Almost the best thing in it is the author's short epilogue, 'The Essence of France', in which he listed what he loved most about that enchanting, if occasionally exasperating, country - its architecture, its painting and its music. These were among Norwich's greatest passions, which he invariably conveyed with authority, charm and wit (Desmond Seward History Today)

A story told with charm and obvious enthusiasm for the subject ... My children constantly ask why the GCSE syllabus cannot be an introduction to British history rather than a somewhat esoteric dive into Weimar, Nazi Germany and Russia. What they want is a comprehensive, approachable and enjoyable survey of the story of our islands - and that is exactly what John Julius Norwich has written about France . . . The attraction of this commendable short history is that it's as entertaining as it is informative, written with fluency, wit and a nicely understated humour: a real pleasure-almost compelling-to read (Country Life)

The tone of France is avuncular, worldly and witty; it is like having dinner with an urbane, well-read uncle. (Country & Town House)

There is certainly a need for a concise history of France in English and, in many ways, John Julius Norwich is the ideal man to write it . . . Norwich has a love for France that stretches back to his childhood and it is evident throughout this readable, entertaining book. (Sunday Times)

This warm, delightful short history of France, aimed convivially at the general reader, is his love letter to the country he knew so well (The Spectator)

John Julius Norwich's political history of France, which begins with Vercingetorix and ends with Charles de Gaulle in 1945, invites us to admire the giants of the past and even vicariously to share in their triumphs . . . richly illuminating (Times Literary Supplement)

Written with zest . . . The sadly late JJN shines through as his best friendly donnish self - an avuncular tutor who invites you in for a glass as he expounds on 2000 years of French history, from the Gauls through Charlemagne and Julius Caesar to de Gaulle. With a deft but gentle touch, he goes through sex, death and tennis, and it either complements a summer holiday to France or gives you a sudden desire to visit (OX Magazine) --Ce texte fait référence à l'édition paperback.

After National Service, John Julius Norwich (1929-2018) took a degree in French and Russian at New College, Oxford. In 1952 he joined the Foreign Service serving at the embassies in Belgrade and Beirut and with the British Delegation to the Disarmament Conference at Geneva. His publications include The Normans in Sicily; Mount Athos (with Reresby Sitwell); Sahara; The Architecture of Southern England; Glyndebourne; and A History of Venice. He was also the author of a three-volume history of the Byzantine Empire. He wrote and presented some thirty historical documentaries for television, and was a regular lecturer on Venice and numerous other subjects. Lord Norwich was chairman of the Venice in Peril Fund, Co-chairman of the World Monuments Fund and a former member of the Executive Committee of the National Trust. He was a Fellow of the Royal Society of Literature, the Royal Geographical Society and the Society of Antiquaries, and a Commendatore of the Ordine al Merito della Repubblica Italiana. He was made a CVO in 1993. --Ce texte fait référence à l'édition paperback.

Mark
2,0 sur 5 étoiles Just a kinglist
Commenté en France le 9 juin 2020
Achat vérifié
This is not a history of France. It's an anglophile history of French kings and, since they were almost all called Louis, Philip or Charles, get ready to be confused. The plague and its effect on society gets one sentence. Abbot Sugar is barely worth a mention. There is nothing about the famines that ravaged the population, or industry or technology. But the royal marital relationships are analysed in interminable detail and the battles lost to the English described ad nauseam. I didn't make it as far as the industrial revolution - maybe the book pivots to something interesting in the later chapters.
En lire plus
Utile
Signaler un abus
Traduire les commentaires en Français

limner
1,0 sur 5 étoiles Beware !The Kindle edition is missing all the footnotes so is only part of the text.
Commenté au Royaume-Uni le 11 mai 2019
Achat vérifié
I was delighted to find a special offer for the Kindle edition of this book and immediately downloaded it. I then discovered to my horror that all the footnotes are missing from the Kindle edition.
If you are a fan of John Julius Norwich's books you will know that the information in the footnotes is both essential (this is a history after all) and a place where he regales you with entertaining snippets, wry asides and interesting facts. So to omit these makes the book incomprehensible in places, since you are missing something important, and also strips it of the humour, charm and erudition that characterises this author. I feel that it is also rather shoddy to offer a download of a book with an appreciable amount of the text missing.Consequently one is left cross, with a dull shadow of what should be there and end up forced to buy a hard copy.I cannot recommend that you buy the Kindle edition of this book.
En lire plus
116 personnes ont trouvé cela utile
Signaler un abus
Traduire les commentaires en Français

Manek Dubash
3,0 sur 5 étoiles A love letter to France - but limited in scope
Commenté au Royaume-Uni le 12 avril 2019
Achat vérifié
This history of France is easy to read, created as it was by an accomplished writer who loves his subject matter. As a Francophile myself, I was however expecting more. The book is a detailed walk through France's kings, queens, popes and other luminaries, which is fair enough as far as it goes.

But it's a very blinkered view of the country.

What's missing is the other 99% of the population. Yes, there are movers and shakers in any society but in this book, it's as if the remainder of the French people hardly exist. It's the sort of history I would have read at school - some number of decades ago - rather than a more modern, holistic look at the country and how it's changed over the last couple of millennia.

It also stops after WWII, in 1945, which is a shame, because - as in Britain - so much of modern French life is informed by what happened after that cataclysm. It's especially so in France both because of its history of being occupied, and because of disastrous events such as the never-declared Algerian war.

Justin M. Nicholson
5,0 sur 5 étoiles Couldn't be better.
Commenté au Royaume-Uni le 12 mai 2018
Achat vérifié
This is a wonderful book. In 2017, my wife and I traveled in France on a river cruise. Before we did, I wanted to read a good general one-volume French history to fill in the many gaps in my knowledge of French history, but there was nothing like that readily available. If only this book had been published sooner! Anyway, not only is it beautifully written, serious but not too serious, but it covers with just enough detail everything I wanted to read about, as the sub-title says, "from the Gauls to deGaulle." Of great interest is how intertwined are French and British history, and French and Italian history, and French and German history, and so on. It is no exaggeration that this is one of the best non-fiction books that I have ever had the pleasure to read.
En lire plus
33 personnes ont trouvé cela utile
Signaler un abus
Traduire les commentaires en Français

Tiny Bulcher
3,0 sur 5 étoiles Kings and battles
Commenté au Royaume-Uni le 9 mai 2019
Achat vérifié
Well written and entertaining, but very old fashioned. It's a kings and battles and dates history. Strictly for readers who know nothing whatsoever about the subject. Far too superficial to be of use to anyone else, despite the often very funny footnotes. Shamelessly partisan, too; far too kind to Louis Philippe, and very unfair to De Gaulle.
En lire plus
12 personnes ont trouvé cela utile
Signaler un abus
Traduire les commentaires en Français

Jingleballix
4,0 sur 5 étoiles A Charming Textbook
Commenté au Royaume-Uni le 2 novembre 2018
Achat vérifié
John Julius Norwich was one of Britain’s biggest Franco-philes, and his ardour for the nation seaps out of every page. His emotions are perhaps intensified by the fact that he knew he was dying as he completed the project.

As he himself admits, the work is not a thorough history - more a potted one - and it is not academically referenced, and only perfunctorily noted. It strikes me as a perfect starter for anyone seeking an overall view of the history of Les Francais, be they old or young.

It has the additional virtue of being beautifully written, as befits the academic and social education of its author.