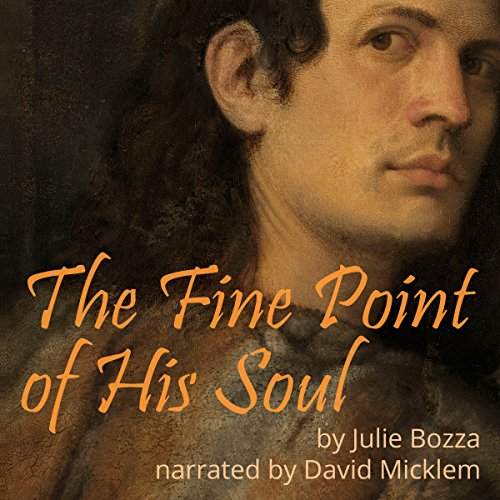 The Fine Point of His Soul

He was the shameful cause of his sister Elena's death, and he stole state papers from England, yet Adrian Hart is feted by the best of society in Rome and boldly dubs himself "Iago".

Determined to avenge Elena, his unrequited love, Lieutenant Andrew Sullivan asks the advice of poet and Shakespearean John Keats and his artist friend, Severn. Soon, Percy Bysshe and Mary Shelley join them, then Lord Byron and his servant, Fletcher.

But how can the seven of them work against this man when they can't even agree what he is? The atheist, Shelley, insists that Hart is an ordinary man, while Byron becomes convinced he's the devil incarnate, and Keats flirts with the idea that he's Dionysius....

As death and despair follow in Hart's wake, Sullivan knows he must do something to stop Hart before even Sullivan himself succumbs - but what?

I do read some 19th century literature, though – mainly Arthur Conan Doyle and select Gothic horror novels, which I love for their arcane delicacy and creeping horror as much as for the rich language.

Julie Bozza’s novel, The Fine Point of His Soul, wonderfully combines Gothic horror and the poetic philosophy of the Romantics by having Keats, the Shelleys and Byron all as characters in her elegant, flowing and gloriously creepy alternative history set in Italy in 1820-21.

The story is narrated by sailor Andrew Sullivan, who is seeking a man named Adrian Hart, hoping to exact some kind of justice from him. Hart, going by the name of Iago, is an elusive figure, responsible for the death of his own sister, Elena, the wife of Sullivan’s captain, and secret beloved of Andrew himself.

Sullivan falls in with Keats and Keats’ friend, the artist Severin, and joins them on their journey to Rome, where they all become entangled is Hart’s murky doings. Before long, the Shelleys, Byron and Byron’s loyal servant Fletcher are enlisted in the mission to find out what Hart is up to and how they might thwart him – if they can indeed discover his true nature.

The true nature of Adrian Hart is very difficult to define. Quoting Iago, all he’ll say about himself is ‘I am not what I am’, and that appears to be of little help to anyone, though it gives pretty much everyone the creeps. As a protagonist, Hart is in fact seen very little in this book – but we see the effects of his passage everywhere we look. We encounter those who have encountered Hart and see for ourselves the wreckage they become, even while having no idea what he is doing to them or how.

Bozza treads some very fine lines in this novel, but does so as a skilled tightrope walker. She evokes the language and cadences of the time period without sounding like a pastiche – her prose has an easy, thoroughly readable flow. Through Andrew Sullivan she has a narrator who is practical but has a love of the noble and poetic, particularly explored through his friendship with Keats and the discussions he has with all the poets.

Bozza writes artists who converse like artists without getting pompous or sounding like she’s simply reworking material from their own poetry or diaries. Her understanding of the poets in question and their worldviews feels extensive, and she manages to incorporate these ideas with a light touch and a sensibility for how they impact the characters, their interactions and the overall story.

And she carries of the trick of the 19th century Gothic novel of having a slow pace that takes a long time to advance the hunt for Hart without being in the slightest bit dull or a drag. Instead, the inexorable pace of it is taut and full of anticipation. The events that ratchet up the tension are often small but significant: the inexplicable devastation visited on Severn when he meets Hart and has a drawing taken from him; the sway that Hart seems to have over the fascinated Byron; the confrontation that leaves our hero Sullivan in despair.

There is a definite creeping horror in The Fine Point of His Soul, the product of a finely wrought atmosphere rather than any scenes of violence or recognisable corruption. The final confrontation takes place in Hart’s notorious library (a scene which, as a book lover, pulled me exquisitely in several directions) and the poets and other protagonists are left to make what sense they can of the outcome, as well as the nature of the evil of Adrian Hart – this venomous Iago. There’s an element of frustration to this lack of definition, but also a certain pleasure in deciding for yourself. (I see him as a vampire of sorts, but of course we know my predelictions in this area.) I admit I found the ending perfect and in keeping with the tone and atmosphere built so carefully throughout the novel.

The Fine Point of His Soul is a beautifully crafted novel of Gothic horror, evoking original tales of the time period while achieving its own storytelling voice.

It also makes me want to go out and read the poetry of the Romantics.
En lire plus
Une personne a trouvé cela utile
Signaler un abus
Traduire les commentaires en Français