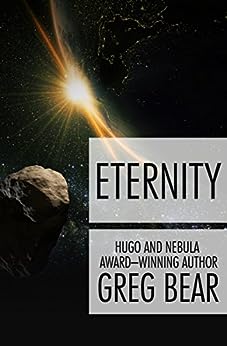 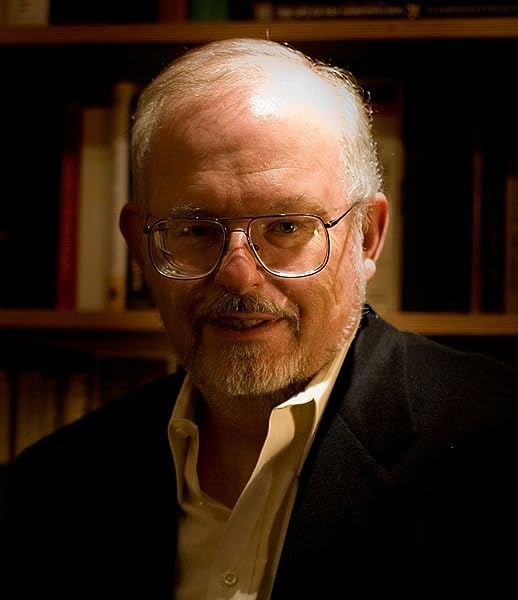 Bear's popular novel Eon introduced The Way, an infinite tunnel in space-time opening on other universes. Following a nuclear holocaust on Earth and the 40-year-long Jart Wars against rapacious aliens, the entrances were sealed. That decision is reconsidered in this sequel. On the asteroid/spaceship Thistledown, scientist Olmy investigates the mental processes of the little-known Jarts while on Gaia, a Greek-dominated alternate Earth, young Rhita Vaskayza herself enters The Way. A partially recovered Earth witnesses the reappearance of The Way's designer, Pavel Mirsky, who now describes it as a tapeworm winding through the guts of the universe and urges that it be reopened so that it can be destroyed. This slow, visionary tale is less than compelling, but its portrait of the different responses of intricate, interlocking cultures is striking.
Copyright 1988 Reed Business Information, Inc. --Ce texte fait référence à l'édition kindle_edition.

Here is the powerful sequel to Eon, now with a dramatic new cover, coinciding with the Tor mass market release of Bear's latest novel, Moving Mars. At the close of Eon, Patricia Vasquez settled on an alternate Earth, Garry Lanier retired, and the Jarts and Naderites were caught in the Corridor. Now the fate of the universe is up for grabs. Reissue. --Ce texte fait référence à l'édition kindle_edition.

* #40 in the Millennium SF Masterworks series, a library of the finest science fiction ever written.

* Blood Music won the Nebula and Hugo Awards in its original shorter form.

* ‘One of the few SF writers capable of following where Olaf Stapledon led, beyond the limits of human ambition and geological time’ Locus

A messenger from the end of time topples the precarious balance of power that exists between the Old Natives of Earth and their benefactors, the human members of the Hexamon who live inside the asteroid Thistledown. As political rivals, inhuman alien intelligences, and travelers from alternate worlds meet in a corridor of possibilities, the destiny of the world hinges on the fragility of human choice. Showcasing Bear's imagination and considerable storytelling talent, this sequel to Eon is highly recommended. JC
Copyright 1988 Reed Business Information, Inc. --Ce texte fait référence à l'édition kindle_edition.

Here, from the other side of time, come: THISTLEDOWN, the asteroid starship of a future that is not quite our future; GAIA, a parallel reality where Alexander the Great's empire has ruled for two thousand years; and THE WAY, an infinite corridor through space-time which traverses and encompasses whole universes. And as the strands of these mysteries are unravelled, so the ordering and the end of mankind -- and our entire Universe -- come into question --Ce texte fait référence à l'édition kindle_edition.

Greg Bear, author of more than twenty-five books that have been translated into seventeen languages, has won science fiction's highest honors and is considered the natural heir to Arthur C. Clarke. The recipient of two Hugos and four Nebulas for his fiction, he has been called "the best working writer of hard science fiction" by The Science Fiction Encyclopedia. Many of his novels, such as Darwin's Radio, are considered to be this generations' classics. Bear is married to Astrid Anderson, daughter of science fiction great Poul Anderson, and they are the parents of two children, Erik and Alexandria. His recent thriller novel, Quantico, was published in 2007 and the sequel, Mariposa, followed in 2009. He has since published a new, epic science fiction novel, City at the End of Time and a generation starship novel, Hull Zero Three.
--Ce texte fait référence à une édition épuisée ou non disponible de ce titre.
En lire plus

Malcolm R
3,0 sur 5 étoiles Awesome and awful by turns
Commenté au Royaume-Uni le 22 juin 2021
Achat vérifié
When it sticks to the action this is a good book though the world of Gaia is more interesting than the rest which tends to be wordy conversations and introspection which are pedestrian and sometimes turgid - who really wants to know the voting system of the Hexamon? Characters are variously incorporeal or actual or amalgams of both which tends to be confusing but it all ends with a Big Bang with lots of strings left over for the next one to pull together. One annoying point - tract is a noun not a verb and nothing to do with movement did he forget a prefix or three?
En lire plus
Une personne a trouvé cela utile
Signaler un abus
Traduire les commentaires en Français

F. M. Havicon
4,0 sur 5 étoiles a good read
Commenté au Royaume-Uni le 30 novembre 2014
Achat vérifié
First thing, Amazon has the book order mixed up. This is volume 2, following from Eon, volume 1. Fans will already know this. Nowbies are highly advised to read Eon first as this one won't make sense otherwise. Unlike many sequels, it does not contain a precis of the first volume in the opening chapter.

As sequels go, it is fluently written and expands on storylines started in the original, after a pause of 40 years book time. However it does not actually contain anything new, at least not in the way a new science fiction novel should tread the threashold of what-might-be. It simply uses all the ideas from volume one, shuffles them, and throws them out in a new order. It's a very good read though, so worth investigating (after reading Eon). The third book in the trilogy is unrelated and unreadable so avoid it.

N. Law
5,0 sur 5 étoiles One of the best
Commenté au Royaume-Uni le 25 mars 2021
Achat vérifié
I first read this years ago, it is in my view one of the best sf books ever written
En lire plus
Une personne a trouvé cela utile
Signaler un abus
Traduire les commentaires en Français