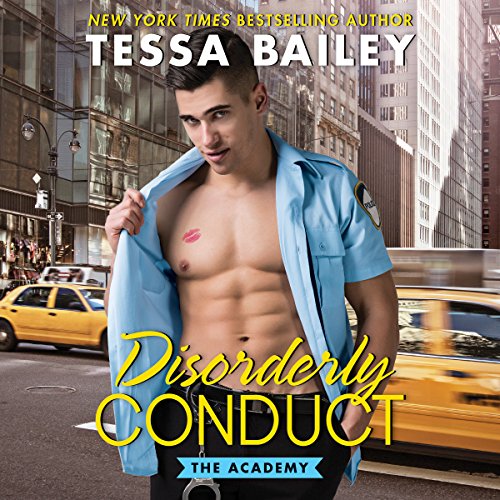 You don't know what you've got until it's gone....

Police academy cadet Charlie Burns can't believe his luck when the gorgeous blonde he meets in a bar murmurs those magic words: "Nothing serious, 'kay?" Mind-blowing, no-strings sex with Ever Carmichael - it's the holy grail of hookups for a guy who's too busy following in his law enforcement family's footsteps to think about getting serious. Charlie's all about casual...that is until Ever calls it quits, and his world tilts on its axis.

Ever knows that when you control the relationship game, you can't get played. But for the first time, she wants more than short-term satisfaction. Step one: end her fling with commitment-phobic Charlie. Step two: sacrifice herself to the ruthless NYC dating scene. Yet everywhere she turns, there's Charlie, being his ridiculously charming self. No online match or blind date compares to the criminally hot cop-in-training, but they're over. Aren't they?

If love is a four-letter-word, why does the idea of Ever seeing someone else tie Charlie up in knots? Now he's desperate to win her back...and a little date sabotage never hurt anyone, right?

Chantal Lefebvre
5,0 sur 5 étoiles Wow, loved it!!!
Commenté au Canada 🇨🇦 le 29 novembre 2017
Achat vérifié
Tessa Bailey is one of my favorite author and if you know her, buy this book. It’s great!!! If you don’t know her, take a chance. You won’t regret it. This book is funny, hot and sweet at the same time.
En lire plus
Signaler un abus
Traduire les commentaires en Français

Kindle Loving Mom
5,0 sur 5 étoiles Why am I still surprised by how amazing Tessa's books are?!
Commenté aux États-Unis 🇺🇸 le 29 août 2017
Achat vérifié
So, real talk? Tessa Bailey is my favorite author. I've loved all of her books, and yet I'm continually surprised by how amazing each one is. Why am I still surprised?! I don't know. All I know is that if you want sexy, but still sweet, alpha male heroes, with dirty talking skills like whoa, and heroines who are smart, independent, and fun, you REALLY need to read Tessa's books. This book was no exception, and Charlie and Ever were complete magic together.

Charlie Burns is in the NYPD Police Academy, following in his father's and older brother's, and about 3 other generations of his family's, footsteps. He's determined to be the best, and nothing less. He knows the sacrifices he's making in his life to obtain this goal, including love. His mom skipped out when he was a kid because she couldn't deal, so he has no plans to put all that on another person in his life. He's content to have no strings flings, and never expected to even want anything more. Then in the bar one night, a beautiful, magical unicorn walks in, and she doesn't want anything serious either? Sign him up.

Ever Carmichael comes from a long line of mistresses. Yes, that kind. She's lived by the rules her mom, and grandmother set out for her. Always choose unavailable men. Never stay with a man more than 30 days. Never fall in love. Never depend on a man for anything, just get it yourself. Ever has tweaked these rules some to apply to her own life. She doesn't think it's right to carry on with married men the way her mom does, but she looks for men that are unavailable in other ways, like when they're married to their job. Ever is deep into her own job, as she and her roommate are trying to get their catering company off the ground, so she doesn't have time for anyone in her life anyway. Charlie is the perfect candidate, since they're both pressed for time, and only want each other physically. But, something happens in Ever's life, and she decides she wants to try for more in her life than casual hookups. She knows that's not what Charlie is looking for, so she calls it quits. Charlie doesn't like that at all, and he wants to convince her they have the perfect arrangement.

Charlie and Ever's chemistry is like FIRE. They are so hot together, and the sexy times were top notch. They have a bit of funny banter as well, though for the first part of their "relationship", they don't do much talking. I really enjoyed their awkward interactions after their "non-break-up" when they try to be friends too. Charlie is convinced that if he can secretly thwart Ever's dates, that she'll realize it's a waste of time, and they can go back to their perfect arrangement. But, he comes to realize maybe that old "arrangement" isn't going to work for him anymore either. Charlie screws up very badly, but he gives one of the greatest, most epic grovels, I've ever read, and I loved it so much. It's definitely now on the top of my list of favorite grovels of all time. I love a hero who isn't afraid to do ANYTHING to get his girl back, and Charlie was amazing.

This was an emotional story, and both Charlie and Ever had FAR from a typical childhood, which had great bearing on their lives as adults. They were both trying desperately to please their parents, without realizing the damage it was doing to them. Watching them finally become more self-aware was so worth the journey. There were so many great side characters in the story too. I really loved Charlie's 2 best friends and roommates, Jack and Danika. They're each going to have their own books in the series too! I love this world Tessa has set up, and I'm so curious how the next 2 books are going to play out, based on what I know of Jack, though I know nothing about his heroine. And especially for Danika, with Charlie's older brother, Greer. A lot of greatness is yet to come!

I highly recommend this book, and I'm so looking forward to the rest of the series! Pure magic that still has me smiling every time I think of it!
En lire plus
11 personnes ont trouvé cela utile
Signaler un abus
Traduire les commentaires en Français

Krista
5,0 sur 5 étoiles Another Tessa Bailey Standout
Commenté aux États-Unis 🇺🇸 le 14 novembre 2017
Achat vérifié
Disorderly Conduct has Tessa Bailey stamped all over it from the dirty talking NYC cop-in-training to the ball-busting chef that he can't seem to quit. Tessa has taken us back to the law-enforcing alpha males that she does so freaking well, and I've never been more happy about getting all up in a cop's business.

Disorderly Conduct sort of flips the standard romance formula around a bit. Charlie and Ever make an instant connection in a bar and follow it up with an amazing night of no-strings sex. Both of them are total commitment-phobes and are perfectly happy with frantic quickies for a limited time only. But, then Ever's mother turns her life upside down when she gives her some words that convince her to try finding a lasting, loving relationship. No matter how much Ever likes Charlie, he's made it clear he's married to his job, and everyone else comes second. So, she calls an end to their fling so that she can find a nice, permanent man to settle down with.

All that happens in the first 15% or so of the book. The stage is set as Ever creates an online dating persona in her attempts to find Mr. Right. And Charlie, for some inexplicable reason is determined to thwart her every attempt so that he can keep his favorite hook-up girl available whenever he wants her. Now I know - Charlie sounds like a total douche. But, the ways he goes about trying to convince Ever that a relationship - especially with the guys she's looking at - is not what she wants is kind of adorable. And the fact that he has no idea he's doing all this because he likes her more than just a one-month stand is frustratingly funny.

Ever is a tough-as-nails chick. She's starting a new catering business with her BFF and has left a long string of "just sex" relationships in her wake. It's all she knows. She can admit to herself that a real relationship with Charlie is really what she wants, but she also knows that he doesn't want that. She does the right thing and cuts him loose so that he can go be a lieutenant on the police force like his brother and his father, without the complications of a girlfriend. She's brave, and I loved that about her.

Poor Charlie doesn't know what he wants. He thinks he knows, but all that changes when he meets Ever. And it takes him a good long time to get his head on straight and see what he really wants. Unfortunately, by that time, things have sort of gotten out of his control. So, of course, that's when it really gets interesting.

We meet the side characters that will make up the books in the rest of The Academy series, and I'm already looking forward to reading all the HEAs of theses academy recruits.
En lire plus
5 personnes ont trouvé cela utile
Signaler un abus
Traduire les commentaires en Français

micharch
3,0 sur 5 étoiles A lot of back and forth between these two.
Commenté aux États-Unis 🇺🇸 le 19 mars 2018
Achat vérifié
Charlie and Ever have a similar philosophy of relationships - neither one wants one. Ever has been groomed from childhood to be a "mistress" and not to seek a real relationship with a man. Charlie has been on his own with his father and brother both being married to their jobs as policemen. Charlie feels that the job would not be conducive to a relationship, or a lasting marriage so he feels that he should just do casual flings. Ever has a one-month time limit on her relationships and has a set of rules. She even goes so far as to ask the guy several questions to ensure that he is not relationship material before she agrees to a short-term fling. They were both pretty compatible and things flowed well for them in the beginning.

I didn't like how Ever decided to change her goals after her mother pretty much demanded she try dating for real. It seemed to me that Ever needed to decide what made her happy. She was kind of all over the place on Charlie and I got where he was getting whiplash.

Charlie was a mess. He didn't want to acknowledge he had feelings for Ever so he tried to justify his sabotaging her dates, etc. as him wanting their status quo back. It was so interesting to see the lengths he went to in order to have Ever back. The back and forth between them got a bit old after a while. They were both way too young to be so jaded on relationships. I got that they both had bad role models growing up, but neither one of them seemed to own up to their issues.

Charlie's epiphany was interesting and I liked how he went after what he wanted. Ever seemed to be so stuck on her "new" perspective on love, that she missed what was right in front of her. I did like the ending and found the book to be interesting.
En lire plus
3 personnes ont trouvé cela utile
Signaler un abus
Traduire les commentaires en Français
Afficher tous les commentaires