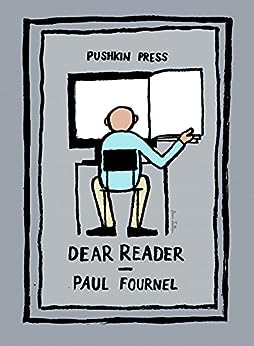 'All about the intense and carnal pleasures of reading' -- Telerama

'Poetic, satirical and delicate: here is a novel in urgent need of reading' -- L'Express

'Brief, witty, intellectual and wonderfully quotable... the most truthful account of literary ennui I have ever read... a quietly remarkable little book' -- Spectator

'A wry but affectionate look at today's publishing world' --The Lady

'[A] pleasingly bookish novella... can be hugely enjoyed without being studiously deciphered' -- TLS

'Dear Reader is a good example of why the Oulipian method isn't merely a game, but rather a surprisingly fertile approach to writing' --The Complete Review --Ce texte fait référence à l'édition kindle_edition.

Paul Fournel was born in 1947. He worked as a publisher with Ramsay & Seghers, and chaired the Societe des gens de lettres. He was head of the Alliance Francaise in San Francisco, and a cultural attaché in Cairo and London. He now writes full time and cycles during the rest of the day. As a third full-time job, he is the Provisionally Definitive Secretary and President of the literary collective known as Oulipo, whose members have included George Perec and Italo Calvino, among many others. He is also the author of numerous novels, short stories, plays, memoirs, and poetry.
David Bellos is Director of the Program in Translation and Intercultural Communication at Princeton University, where he is also Professor of French and Comparative Literature. He has won many awards for his translations of Georges Perec, Ismail Kadare and others, including the Man Booker Translator Award, and received the Prix Goncourt de la biographie for George Perec, A Life in Words. --Ce texte fait référence à l'édition kindle_edition.

Jill in East Kent
5,0 sur 5 étoiles Oh yes.
Commenté au Royaume-Uni le 15 février 2015
Achat vérifié
If you like books about books you will enjoy this. Plus, you have the added bonus of characters talking about food - French food; lunches mainly.

It rattles along at a good pace and as it's not an overly long book it doesn't take too long to read. And there is a twist, or at least it's not something that sways the story one way or the other, it's to do with the structure of the story. Makes it a book to read again one day.

B
5,0 sur 5 étoiles Charming love letter to publishing
Commenté au Royaume-Uni le 24 avril 2017
Achat vérifié
This is a wonderful love letter to the publishing industry written at a point when the digital revolution that came with eBooks and Kindle was just happening. This is funny, charming, and a wonderful read.

Completely take the point of people who say you need to work in books to fully appreciate it - there are a lot of moments when being an insider makes you appreciate it so much more - but if you are interested in books and are looking for an entertaining work of fiction that is also a celebration of them then this will work for you!

F. Brown
5,0 sur 5 étoiles Book -- Dear Reader
Commenté au Royaume-Uni le 14 mars 2015
Achat vérifié
This is a charming little book; well translated but keeping the flavour of the original. I enjoyed it very much and it had some fascinating insights. It is nicely produuced one one got over the surprise at its small size
En lire plus
Signaler un abus
Traduire les commentaires en Français

overthebridge
5,0 sur 5 étoiles So good, so clever!
Commenté au Royaume-Uni le 8 février 2015
Achat vérifié
An absolute must read for anyone who has ever worked in publishing, or is interested in publishing - before the e-reader.
En lire plus
Une personne a trouvé cela utile
Signaler un abus
Traduire les commentaires en Français