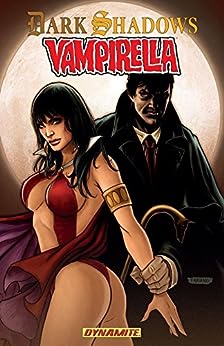 For the first time ever, two of the most iconic vampires in pop culture - Vampirella and Barnabas Collins - meet in a blood-curdling thriller! Can these very different vampire heroes set aside their distrust to together bring down the notorious Big Apple Butcher, or will their bloodthirsty natures destroy them before the killer strikes again? And who - or what - is pulling the strings of the Butcher? The answer is an evil older than Barnabas and Vampi combined! Featuring appearances by Quentin Collins and Pantha, Dark Shadows / Vampirella collects all five issues by acclaimed writer Marc Andreyko and artists Patrick Berkenkotter and Jose Malaga.
--Ce texte fait référence à l'édition paperback.

Samantha Gerke
5,0 sur 5 étoiles This definitely DOESN'T suck!!!
Commenté aux États-Unis le 15 mars 2021
Achat vérifié
So, a werewolf and an upper crust vampire walk into a strip club. Sounds like a joke, but in fact is just one of the parts of this that made me grin. I first encountered Vampirella when I found mom's stash in the laundry room when I was 13 ish. I first encountered Jonathan Frid as Barnabas Collins when I was 20, although I'd heard much about him before. I'm now staring down the barrel of 40, and just... I was so excited to discover and read this that I got a copy for my mom!
En lire plus
Une personne a trouvé cela utile
Signaler un abus
Traduire les commentaires en Français

Albert Tapia
4,0 sur 5 étoiles Vampi and Barnabas: after 40 years, a boyhood fantasy team-up comes true
Commenté aux États-Unis le 22 juin 2013
Achat vérifié
This trade paperback collects the 5 issues in the Dynamite mini-series published last year. I have always been a big fan of both "Dark Shadows" and "Vampirella" (especially during her Warren years, 1969-83). As a kid in the 70s, I often fantasized about Barnabas and Vampi meeting, preferably in a Warren story illustrated by THE master Vampirella artist, the late Jose Gonzalez. Now, 40 years later, the meeting occurs, in a solid but unremarkable color comic, written by Marc Andreyko and illustrated by Patrick Berkenkotter (issues 1-2) and Jose Malaga (issues 3-5), colored by Thiago Dal Bello, lettered by Troy Peteri, and individual covers by Fabiano Neves. The story itself uses the fundamental basics of super-hero meetings, about what you could have expected to see in Marvel Team-Up in the 70s. The plot encompasses not only Barnabas and Vampi, but also their friends Quentin Collins and Pantha, and the story's antagonists are Countess Elizabeth Bathory and Jack the Ripper. A series of bloody murders and abductions brings Barnabas and Quentin to New York City, where they encounter Vampirella and Pantha, also in pursuit of the evil-doers. I was hoping for some romantic sparks between Vampirella and Barnabas, but instead the author matched up Pantha and Quentin, which led to some nice flirtatious interplay between the she-cat and werewolf. (By the way, throughout this story, Pantha and Quentin have a tendency to wind up naked, a peculiar occupational hazard.) The artwork looks rough to me. I much prefer the clear lines of the 60s and 70s. Never mind Warren; even the art in Gold Key's "Dark Shadows" comics looked more appealing and realistic to me. But I admit I'm an old man, and today's comics aficianados might beg to differ. The artists at least often attempt to make Barnabas look like Jonathan Frid, but Quentin looks nothing like David Selby, more like George Maharis in TV's "Route 66." However, in the final, splash panel of part 2, Berkenkotter does make Werewolf Quentin look like his TV image. Personality-wise, Barnabas is portrayed as formal and staid, a fish out of water in the Big City, in contrast with the streetwise Vampirella and uninhibited Pantha, and even the earthy Quentin (perhaps another reason why Pantha is attracted to her fellow shape-shifter). Barnabas and Vampi's respective arch-enemies make cameo appearances, but I won't spoil it. I would rate this as a fast, fun read, sexy and violent in most of the right places. It's certainly not a masterpiece, and not what I had envisioned all those years ago when I was growing up, but it's still a worthy addition to one's Dark Shadows and/or Vampirella collection(s).
En lire plus
10 personnes ont trouvé cela utile
Signaler un abus
Traduire les commentaires en Français

Brandon Sholund
4,0 sur 5 étoiles Fun mashup of two vamps
Commenté aux États-Unis le 5 septembre 2019
Achat vérifié
This is a playful mashup of two famous vampires feeling through New York in search of a serial killer. They were brought together to promote two ongoing series for Dynamite Comics and the pairing works well. The aggressiveness of Vampirella paired with the haunted, gentlemanly behavior of Barnabas Collins works well and the campy, sexy situations they find themselves in only add to the overall fun. If I have one complaint,a it's that the series was too short at only five issues. I would like to have seen more interaction between the two protagonists and some deeper character development with the support players. But fun is fun and I had a blast reading this adventure.
En lire plus
Signaler un abus
Traduire les commentaires en Français