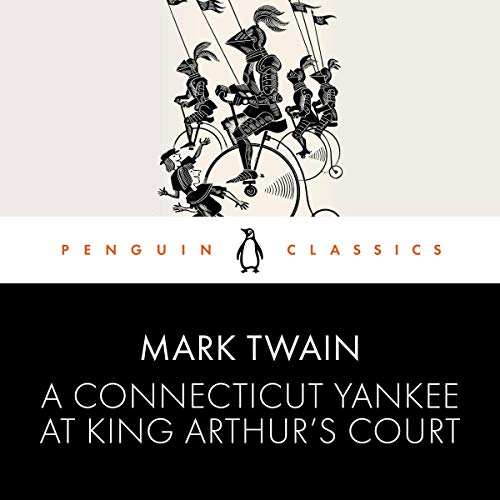 When Connecticut mechanic and foreman Hank Morgan is knocked unconscious, he wakes not to the familiar scenes of 19th-century America but to the bewildering sights and sounds of sixth-century Camelot. Although confused at first and quickly imprisoned, he soon realises that his knowledge of the future can transform his fate.

Correctly predicting a solar eclipse from inside his prison cell, Morgan terrifies the people of England into releasing him and swiftly establishes himself as the most powerful magician in the land, stronger than Merlin and greatly admired by Arthur himself.

But the Connecticut Yankee wishes for more than simply a place at the Round Table. Soon, he begins a far greater struggle: to bring American democratic ideals to Old England.

Complex and fascinating, A Connecticut Yankee is a darkly comic consideration of the nature of human nature and society.

Phrou
3,0 sur 5 étoiles Not bad but very long for being a pleasant book
Commenté en France le 4 mars 2018
Achat vérifié
the main author's idea is a man of "todday" is better and wiser than a man of the past, but not always !
The second, Republic is best than church, king, chilvery ...
The third, liberal economy is good ...

Slightly Miffed
1,0 sur 5 étoiles Incompetently Scanned, Corrupted Crap
Commenté au Royaume-Uni le 18 mars 2020
Achat vérifié
I read this book when I was 10 without difficulty, I'm now 60 and this Kindle version has been so incompetently scanned as to make in incomprehensible gibberish. Every time a page boy is mentioned becomes a web page, every book becomes an E book, the errors mount up. You have to read every word then decide whether a phrase or sentence actually contributes to the story or is just corrupted crap. I accept that 50 years ago I was closer to the language spoken by Mark Twain and that reading it now might be harder for me but there is no excuse to mangle the work of a fine author in this way. Gave up at 26%, how do I get my money back ?
En lire plus
6 personnes ont trouvé cela utile
Signaler un abus
Traduire les commentaires en Français

M. Dowden
4,0 sur 5 étoiles A Fun Read
Commenté au Royaume-Uni le 30 mai 2018
Achat vérifié
Samuel Langhorn Clemens, known best to us all as Mark Twain gave us some great tales. Of course, we have Tom Sawyer and Huckleberry Finn as well as other books and characters, and along with this some great satire and humour.

Here then we have a tale of a man (Hank Morgan) who claims to have gone back in time to the 6th Century and been at the court of King Arthur, at Camelot. I like that at one stage Twain gives a nod to Charles Farrar Browne aka Artemus Ward, the other famous American humourist, who influenced Twain and was a sometime mentor.

Often referenced by others as well as being influential we thus are taken to a medieval world where people seem to be gullible, superstitious, and believe in magic – as well as being dirty. Thus we see Morgan upstaging Merlin and trying to bring civilisation to the people he sees around him. Here then we see many of Twain’s bugbears being discussed and ideas being brought in to try and change things, and so we have a burlesque of the types of books that are in the Romantic tradition of King Arthur and chivalry, along with a satire of the world and how things can be altered.

Knights with advertising boards hanging from their armour, encouraging people to buy soap and wash is just one of the humorous things here as Morgan tries to modernise those around him and bring a bit of Americanisation to the English. This met with good reviews in the US, but over here there were some conflicting opinions, as some felt it was taking the pee out of our traditions and our past. In fact, if you read this you will see this is not so, as what applies to the old times was also familiar throughout Europe, and thus this is more an attack on the Catholic Church, slavery, the lack of democracy and so on.

In all this does make for a fun and thoughtful read, but to be honest I don’t think it can compare to some others of Twain’s works.
En lire plus
3 personnes ont trouvé cela utile
Signaler un abus
Traduire les commentaires en Français

Miss Sally C Brant
1,0 sur 5 étoiles This Kindle version is not complete
Commenté au Royaume-Uni le 20 janvier 2019
Achat vérifié
Unfortunately this kindle version is missing the first part of the book. Although it starts from Chapter One, the book itself actually starts from a heading entitled A Word of Explanation, followed by How Sir Launcelot Slew Two Giants and Made a Castle Free, the The Stranger's Story, then Chapter One. Without reading the first parts, launching straight into Chapter One only mystifies the reader. Project Gutenburg has the complete version available to read.
En lire plus
3 personnes ont trouvé cela utile
Signaler un abus
Traduire les commentaires en Français

Kev Derby
2,0 sur 5 étoiles Check the small print.
Commenté au Royaume-Uni le 10 juillet 2021
Achat vérifié
The font size is rather small, on the plus side it makes for a compact book to carry but many people will need a magnifier to read it.
En lire plus
Signaler un abus
Traduire les commentaires en Français