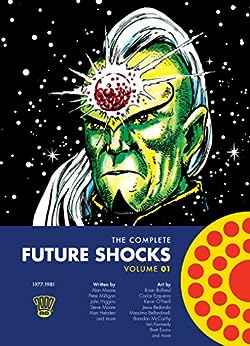 Perhaps the most widely respected comic writer of the modern era, Alan Moore’s contribution to the comics world is incalculable. Creator of some of 2000 AD’s most popular series, including Abelard Snazz, The Ballad of Halo Jones, D.R. & Quinch and Skizz, he has also worked on A.B.C. Warriors, Ro-Busters, Rogue Trooper, Ro-Jaws’ Robo-Tales, Tharg the Mighty, Time Twisters and several one-off strips. Outside of the Galaxy’s Greatest Comic, Moore is best known for his work on the classic Watchmen, which redefined the superhero genre in 1986, but this is simply touching the surface of a career which has included 1963, A1’s Warpsmiths, Bojeffries Saga and Maxwell the Magic Cat, AARGH!, Batman, Big Numbers, Brought to Light, Captain Britain, Deathblow, Flesh and Bones, From Hell, Glory, Green Lantern Corps, Lost Girls, Miracleman, A Small Killing, Snakes and Ladders, Spawn, Supreme, Swamp Thing, Superman , V For Vendetta, WildC.A.T.S. and Youngblood. Moore is now owner and chief writer of the America’s Best Comics line, distributed by WildStorm, and including Promethea, Tom Strong, Tomorrow Stories, Top Ten and The League of Extraordinary Gentlemen, which has been made into a major Hollywood movie.

Dave Gibbons is one of 2000 AD’s most popular artists, having co-created Harlem Heroes and Rogue Trooper. He has also pencilled A.B.C. Warriors, Dan Dare, Judge Dredd, Mega-City One, Ro-Busters, Tharg the Mighty, Tharg’s Future Shocks and Time Twisters, as well as having scripted several Rogue Trooper stories – making Gibbons one of the few 2000 AD creators to have served as writer, artist and letterer! Beyond 2000 AD, Gibbons is unquestionably best known for his work on the award-winning classic Watchmen (with Alan Moore), but he has also drawn Batman, Doctor Who, Give Me Liberty, Green Lantern, Superman, Star Wars and his graphic novel, The Originals.

Steve Dillon is a fan-favourite 2000 AD writer and artist, and the creator of both Hap Hazzard and the Irish Judge Joyce. His writing for the Galaxy’s Greatest Comic includes Future Shocks and Rogue Trooper, while Dillon’s pencils have graced A.B.C. Warriors, Bad Company, Judge Dredd, Harlem Heroes, Ro-Busters, Rogue Trooper and Tyranny Rex. Dillon shot to international superstardom as a result of his work on DC/Vertigo’s Preacher, co-created with 2000 AD’s Garth Ennis.

Perhaps the most popular 2000 AD artist of all time, Brian Bolland’s clean-line style and meticulous attention to detail ensure that his artwork on strips including Dan Dare, Future Shocks, Judge Dredd and Walter the Wobot looks as fresh today as it did when first published. Co-creator of both Judge Anderson and The Kleggs, Bolland’s highly detailed style unfortunately precluded him from doing many sequential strips — although he found the time to pencil both Camelot 3000 and Batman: The Killing Joke for DC Comics. --Ce texte fait référence à l'édition paperback.

Theo Robertson
5,0 sur 5 étoiles Despite The Flaws Hugely Enjoyable
Commenté au Royaume-Uni le 17 octobre 2019
Achat vérifié
Let's the bad points out of the way and that is Future Shocks rips off a lot of other science fiction. At least two of the stories are total steals from Ray Bradbury's A Sound Of Thunder and some of the stories are somewhat similar with size differences leading to all sorts of problem . One other problem might be is that you've already bought Alan Moore's Future Shocks . but there's a only five Alan Moore stories out of a total of almost 90

And of these stories , they're corny , cautionary , tongue in cheek, blackly comical and utterly charming. . Future Shocks was always a highlight for me when 2000AD was more self contained and didn't feel the need to have every page in garish colour schemes . Here the artwork is mainly in black and white by legendary names like Belardinelli , Ezquerra , Ewins and Sola and is lovingly reproduced on glossy paper

When I was a child World War 3 was seemingly just around the corner and war is a running theme throughout the book along with human greed. Most of the stories are utter fantasy and the stall is set out right from the start by the late Steve Moore's King Of The World which might have inspired the name of American alternative band Alien Ant Farm .

If you're in need of cheering up then make yourself a soothing warm drink , sit back and read Future Shocks. It might not belong on the same shelf as Plato and Tolstoy but it doesn't need to be because this is zarjaz entertainment for thrill hungry Earthlets of all ages so a big thank you to Lord Tharg and Rebellion for releasing this compilation
En lire plus
6 personnes ont trouvé cela utile
Signaler un abus
Traduire les commentaires en Français

Mr. M. S. Mckinnon
3,0 sur 5 étoiles Nostalgia but not much more.
Commenté au Royaume-Uni le 28 juin 2018
Achat vérifié
I was really keen to read this, as a lot of these had never been collected before and there's a lot of interesting early artwork from Brian Bolland, Garry Leach, the late Brett Ewins & Brendan McCarthy, Kevin O'Neill etc. [pretty much everyone had a stab at a Future Shock].

But while that's still a treat, it has to be said that a lot of the stories are garbage: either ripoffs of existing SF stories, or lame sub-Twilight Zone cautionary tales with a twist in the end. Alan Moore turns up halfway through, improving things a great deal; though his stuff been milked for so long now everyone must surely own it already.

A B
5,0 sur 5 étoiles Zarjaz!
Commenté au Royaume-Uni le 28 juillet 2018
Achat vérifié
I remember many of these stories from reading 2000AD growing up in the 70's. I hadnt read most of the stories since that time and I really enjoyed this. I almost read the whole book in one sitting.
En lire plus
3 personnes ont trouvé cela utile
Signaler un abus
Traduire les commentaires en Français

DRM
4,0 sur 5 étoiles Sci Fi horror stories that are mostly quite good
Commenté au Canada le 7 avril 2021
Achat vérifié
This is a collection of sci fi horror stories from the British magazine 2000 AD. These are short filler stories so don't expect too much from them. Stories and art are done by a variety of authors and artists. Stories range from very clever, funny to simple and obvious. There are only two main female characters in all these stories one only for the use of her name for the end joke. The art is very good on all the stories. There is no bad art here. Basically I'd say it's worth the money.
En lire plus
Signaler un abus
Traduire les commentaires en Français
Afficher tous les commentaires
Retour en haut
Pour mieux nous connaître
Gagnez de l'argent
Moyens de paiement Amazon
Besoin d'aide ?
© 1996-2021, Amazon.com, Inc. ou ses filiales.