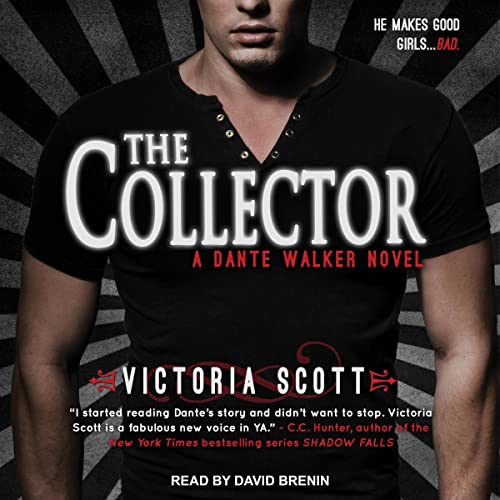 Dante Walker is flippin' awesome, and he knows it. His good looks, killer charm, and stellar confidence have made him one of Hell's best—a soul collector. His job is simple, weed through humanity and label those round rears with a big, red good or bad stamp. Old Saint Nick gets the good guys, and he gets the fun ones. Bag-and-tag.

Sealing souls is nothing personal. Dante's an equal opportunity collector and doesn't want it any other way. But he'll have to adjust, because Boss Man has given him a new assignment:

Dante doesn't know why Boss Man wants Charlie, nor does he care. This assignment means only one thing to him, and that's a permanent ticket out of Hell. But after Dante meets the quirky, nerd alert chick he's come to collect—he realizes this assignment will test his abilities as a collector, and uncover emotions deeply buried.

I've been waiting for this book since forever. I've been dreaming it in my hands and now that I finally got to read, I want to explode. The Collector is SO good. Unique, full of romance, action. It was definitely worth the one year I had to wait for it to come out.

First of all, I adored Victoria's Scott writing. It's so funny. The story flows perfectly, making you hooked immediately. She has a gift of making the story really vivid, like you can actually watch it unravel before your eyes. Victoria Scott is definitely a new voice in YA who needs to be reckoned with.

And here's the good part. D A N T E W A L K E R. Swoon. This guy is the definition of swoon. Gawd, I just love him. He's... UGH! I'm fine, okay, I'm fine *exhales*. Dante Walker is the lead male of the book and we see the story from his point of view. I enjoyed reading the story from his POV. We get to see the real changes in him and also, the truth about who he is. Dante is a collector. He collects souls and brings them to Boss Man aka Lucifer. Yep, he's a demon, a villain. He's also the best collector out of the six of them. And he knows it. He's so totally aware he's flipping awesome, it just may annoy you in the beginning of the book. Let me tell you something. Dante's not your usual cocky, bad boy YA book character. He's the actual villain in the story. That's what's so unique about this story. Watching him change, or better yet, watching Charlie change him throughtout the book is just amazing. Yes, we can all see the good in him, even in the beginning. What we don't know is if the good side of him is enough for him to actually be good instead of a pawn of hell.

Then there's Charlie. Another totally unique character. Charlie's a sweet, good girl who lives her life peacefully in Peachville. She's not pretty - glasses, bad skin, limp and all. Thank God for Charlie! I'm so tired of book heroines being so damn perfect. I mean, c'mon, that's just stupid. But then, here comes Charlie, with all her nerdy-ness and unpretty-but-at-the-same-time-pretty face and rocks our world. I love her! She had had a lot of crap on her plate since she was young but instead of being moody and constantly cursing the world, she tries to make it better. She smiles and has hope. So many people have lost hope, nowadays, and so many girls try to be too damned awesome - it's disgusting! Charlie really is a heroine to look up to. I personally admire her so much. Because she's not a coward and she's good and she cares about her loved ones and she actually forgives. GO CHARLIE!

The Collector is definitely one of my favorite books of 2013 so far. Unique and full of romance with a boy who will rock your world and a girl who will make you feel confident again. Read it. The Collector is amazing!
En lire plus
Signaler un abus
Traduire les commentaires en Français

Amazon Customer
4,0 sur 5 étoiles An impressive debut. POW.
Commenté au Royaume-Uni 🇬🇧 le 7 avril 2013
Achat vérifié
I have to be honest and tell you that when I first heard about The Collector, I was scared to read it because the plot sounded just like Personal Demons by Lisa Desrochers (which by the way, is one of my favourite books). I mean, a hot, arrogant soul collector from hell who is the best at what he does is sent on an assignment to collect a good girl's soul (and she just happens to have some sort of significance) and guess what?! The more time Dante spends with Charlie, the more he starts to care for her. Yeah, that sounds like Personal Demons all right but you know what? Time and time again I think of something that Maggie Stiefvater (author of Shiver and The Scorpio Races) once said - that just because two people have the same idea, it doesn't mean that it's the same book and it's all down to the execution of it. She's a wise woman is Maggie. I am pleased to tell you that The Collector IS a different book to Personal Demons and definitely just as enjoyable if you give it a chance.

Now it's time for confession number two. When I first started reading the book, I HATED Dante. I thought he was an arrogant, selfish jerk and the way he talked? Who talks like that?! I almost stopped reading as I thought this was not the book for me. And then something magical happened. Slowly but surely, as I got to know him better through his interactions with Charlie and Grams, I saw that beneath the shiny exterior, he's actually a somewhat decent guy and I actually grew to like him. I have the utmost respect and appreciation for books that can make me change my mind and that my friends, is purely down to the talent of the writer.

Dante is the main protagonist in the book but most of the focus is on Charlie, a sixteen year old girl who lives with her Grams. At first, I thought she sounded a lot younger than her character but I'm going to put that down to the fact that she's led a somewhat sheltered life and never goes out to parties or socialises with "the cool kids". She's not the prettiest of girls on the outside but she has an inner beauty that makes her a really decent person and she has two loyal best friends in the form of Annabelle and Blue, the latter being a boy who secretly holds a candle for Charlie. I liked the fact that Blue was the only one who saw the inner beauty Charlie had and as she became more beautiful on the outside, it sort of didn't matter as much to Dante at that point as he'd already fallen for her. They seemed like such an unlikely partnership in the beginning and you'll just have to read the book to find out if they can make it work.

I will say that there is one particular question (not the one above) that isn't answered fully at the end of the book, an unresolved plot point if you will and this niggled me a little BUT it paves the way quite nicely for a sequel. I really enjoyed the book, it was fun and laugh out loud funny at times but there were also heartfelt moments that will touch even the coldest soul. A fantastic debut from Victoria Scott, my pre-ordered copy should be arriving any day now and all I have to leave you with is...POW ;)
En lire plus
Signaler un abus
Traduire les commentaires en Français

Momina
5,0 sur 5 étoiles The Ultimate Bad Boy!
Commenté au Royaume-Uni 🇬🇧 le 2 avril 2015
Achat vérifié
Dante is the reason 'bad boy' exists. He is THE bad boy with a heart... or not since he's dead.

He feels so real. As if you've met him in reality and your best friends etc. If. Only.

Actually, I think I'd be terrified in a way. No way do I want to collect my soul to take to Hell.

Victoria Scott I want to thank you for bringing Dante into this world. (I'm making it sound as if you gave birth to him... well in a way you did by writing him 😉)

To all the people hesitating to buy this, FEAR NOT. You will be glad to have come across a dude like him. He is hotness and although he's a dead soul collector, he's more close to reality by his way of thinking than any other character I've read.
En lire plus
Signaler un abus
Traduire les commentaires en Français

Caroline
4,0 sur 5 étoiles Enjoyable read
Commenté au Royaume-Uni 🇬🇧 le 15 avril 2013
Achat vérifié
I really quite liked this book. It was a fun, easy read and a decent concept and plot. The characters and story were well written. I liked Dante and how the author progressed him through the story. Even when he's unlikeable, there is still something likeable about him. The story kept me interested enough that I didn't have to skip a single page (something I do when I'm not gripped, just to get to the end). Enjoyed the wit and banter between the characters and some very funny conversations/situations that made me laugh on quite a few occasions. I would definitely read another by Victoria Scott.
En lire plus
Signaler un abus
Traduire les commentaires en Français