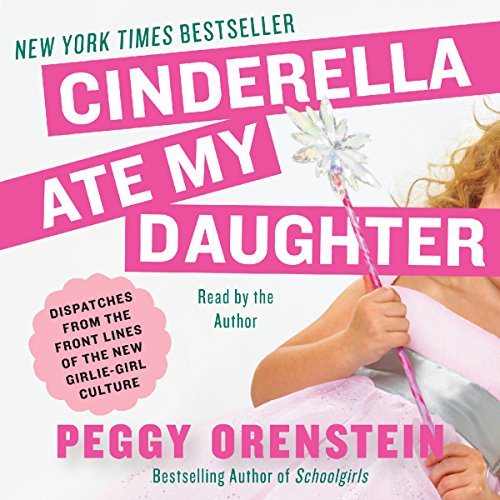 Cinderella Ate My Daughter: Dispatches from the Front Lines of the New Girlie-Girl Culture

Pink and pretty or predatory and hardened, sexualized girlhood influences our daughters from infancy onward, telling them that how a girl looks matters more than who she is. Somewhere between the exhilarating rise of Girl Power in the 1990s and today, the pursuit of physical perfection has been recast as a source - the source - of female empowerment. And commercialization has spread the message faster and farther, reaching girls at ever-younger ages.

But, realistically, how many times can you say no when your daughter begs for a pint-size wedding gown or the latest Hannah Montana CD? And how dangerous is pink and pretty anyway - especially given girls' successes in the classroom and on the playing field? Being a princess is just make-believe, after all; eventually they grow out of it. Or do they? Does playing Cinderella shield girls from early sexualization - or prime them for it? Could today's little princess become tomorrow's sexting teen? And what if she does? Would that make her in charge of her sexuality - or an unwitting captive to it?

Those questions hit home with Peggy Orenstein, so she went sleuthing. She visited Disneyland and the international toy fair, trolled American Girl Place and Pottery Barn Kids, and met beauty pageant parents with preschoolers tricked out like Vegas showgirls. She dissected the science, created an online avatar, and parsed the original fairy tales. The stakes turn out to be higher than she - or we - ever imagined: nothing less than the health, development, and futures of our girls. From premature sexualization to the risk of depression to rising rates of narcissism, the potential negative impact of this new girlie-girl culture is undeniable - yet armed with awareness and recognition, parents can effectively counterbalance its influence in their daughters' lives.

Cinderella Ate My Daughter is a must-read for anyone who cares about girls, and for parents helping their daughters navigate the rocky road to adulthood.

GrrlAlex
4,0 sur 5 étoiles Big Mac and Fries
Commenté au Royaume-Uni 🇬🇧 le 20 février 2012
Achat vérifié
This is an enjoyable and entertaining read by a writer who conveys passion and conviction for her cause. Orenstein is a journalist rather than an academic (and her style reflects that), but she's done her homework and there are some fascinating and really interesting points made throughout the text.

As someone with a professional interest in gender studies I was keen to get my hands on a copy once it came out. So, one morning last week, the delivery arrives - and ripping open the Amazon packet excitedly I take in the front cover. The artwork is delightful, albeit of course ironic with its glitter appliqué, but this excitement is quickly tempered when one notes the low quality of paper the publisher has used. Maybe I'm a book snob but I felt the paper took the work down-market in a way that kinda does the content an injustice. *Just saying guys*.

The author draws on her experience of raising a daughter in the 21st century to illustrate concerns that trouble many of us with pro-feminist values. It's as if there is some kind of backlash against the whole 1980's 'dungarees and crew-cut' image of second wave feminism that had ordinary women recoiling in horror and making sure their daughters would become 'proper girls' (ie: not lesbians) - and as if to make the point the definition of girl-approved identities suddenly becomes strangled in pink tulle, as girls are schooled in the notion of looking pretty and attracting a handsome prince.

Orenstein explores the images and imagoes that our daughters are exposed to and reminds us that the whole 'pink' thing, where malls and toy-shops become gender delineated by strict colour ways is actually a relatively new phenomenon: back in our generation yes girls were coached in the ways of becoming proper house-wives and encouraged to play with dolls but there were also gender neutral toys like Lego (which sadly more recently succumbed to the whole 'girl-market=pink/lilac" zeitgeist). As she points out, play was more open, more creative and less fixed by script or branded characterisation. If you wanted to be Cinderella or Snow White, mum had to make the costume on the Singer sewing machine or you adapted pieces from the dressing up box and pretended.

Any analysis of the social meta-messages pummeled into young girls these days has to consider the pre-sexualisation of girl's bodies and the notion of the female body as a commodity: and this is a theme that is weaved throughout the text. There is an interesting chapter looking at the child beauty pageant, and the family Orenstein highlights in the text have to balance the emphasis on how 'beautiful [and normal]' their daughter is in contrast with their son who has severe disabilities: it's a poignant narrative. In another particularly thought-provoking chapter, "Just between you, me, and my 622 BFF's", Orenstein explores the use and impact of social networking, and offers the notion that having 622 'friends' is in a sense to have created a quasi-audience for the pseudo-celebrity performance of the [gendered] self. She is right to raise the concern as the feedback from the peer group has the tendency to reiterate dominant [hetero-normative] messages and stifle individuality -particularly within teen peer groups where fitting in is often at the cost of expressing the true self.

I do have some disquiets with this book (cheap paper aside) - I felt the use of promotional quotes at the start of the book was a little over-done - this book doesn't need a hard sell, its value can stand in its own right and again it started to put me off - why the need to shout so loud if the book is that good: surely I'll work that out a few pages in. That's a publisher issue I suspect. *just saying guys* . And, there are places where the author's natural ebullience and irreverent tone jar a little and in a couple of instances I suggest, slipped towards the distasteful (in particular here, I'm thinking of her reference to the David Reimer case by way of example, or in her reference to Lindsey Lohan)

We might wonder who the book will appeal to: academics may find it lacking in gravitas but then it is written for a broad audience and needs to follow a different convention. Parents of daughters of course is the primary audience but I suggest that these will split into two - those who collude unquestioningly with these constraining norms, who don't consider the subtle but powerful messages influencing the mindset of the next generation of women (a generation more concerned than ever about youthful looks and impossibly unattainable physical ideals), and those parents whose own feminist beliefs has had them pushing Tonka toys into the hands of their daughters in desperation (for whom this book will no doubt resonate powerfully - albeit we are preaching to the converted here).

In writing this review I wanted to summarize my experience of reading the book by likening it to Big Mac and fries. It has a very American feel to it and the tone can feel a little brash on this side of the pond. That said, I enjoyed it. McDonald's don't make an outstanding burger but what they produce is consistently good enough to meet a particular market. I hope its not unkind to suggest that what Orenstein offers has that same broad market appeal and it's not pretending to be academic any more than McD claims to be haute-cuisine. This book adds a worthy voice of concern to the way we raise girls and for these reasons I offer a 4 star rating and hope others will be encouraged to give consideration to the points raised in this work.

og505
5,0 sur 5 étoiles One of my favourite feminist texts
Commenté au Royaume-Uni 🇬🇧 le 3 septembre 2013
Achat vérifié
This book comes from the perspective of a life-long feminist who is also a mother to a daughter, two roles which are at times difficult to reconcile. This is precisely the reason why Cinderella Ate My Daughter is such an important book. My problem with some feminist books is that they can be a bit abstract and quite theoretical. Orenstein avoids this problem by speaking directly about her own experiences and being frank about the conflicting feelings she feels as a mother and as a feminist. She combines myriad examples with research and her own experiences while providing guidance for mothers who may find themselves in the same Cinderella-dominated world for young girls. This is one of my favourite feminist books and it's definitely changed the way I view gender socialization and the problems that young girls face. Don't be deceived by the deep topic matter: this is very easy to read and I had a hard time putting it down.
En lire plus
7 personnes ont trouvé cela utile
Signaler un abus
Traduire les commentaires en Français

This book is really well written as points are intelligently made and well researched but also at times anecdotal and humourously put, so it was also a very easy read.

Something I found particularly great about this book was the discussions of the 90's and the girl power movement, (which I have to admit made me a little nostalgic), the disney princesses and the overwhelming amount of pink in girls products.

There is also some good advice in negotiating ideas of gender with small children with some great examples of problems she had when her little girl was growing up.

If you are interested in feminism and the current ideas of femininity that are presented to children, I would really recommend this book
En lire plus
2 personnes ont trouvé cela utile
Signaler un abus
Traduire les commentaires en Français

Evie
5,0 sur 5 étoiles Everyone should read this book...
Commenté au Royaume-Uni 🇬🇧 le 10 juillet 2020
Achat vérifié
This book makes you think about the environment little girls grow in and how big its influence on their later development and life choices has. What seems like an innocent comment, an unimportant TV show/book/toy choice might end up having more weight than we first thought.
Everyone with daughters should read this book-seriously.
En lire plus
Signaler un abus
Traduire les commentaires en Français