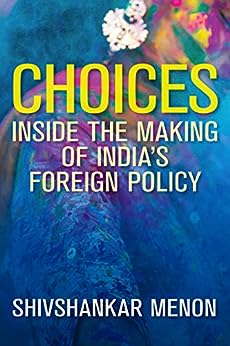 A look behind the scenes of some of India’s most critical foreign policy decisions by the country’s former foreign secretary and national security adviser.

Every country must make choices about foreign policy and national security. Sometimes those choices turn out to have been correct, other times not. In this insider's account, Shivshankar Menon describes some of the most crucial decisions India has faced during his long career in government—and how key personalities often had to make choices based on incomplete information under the pressure of fast-moving events.

Menon either participated directly in or was associated with all the major Indian foreign policy decisions he describes in Choices. These include the 2005–08 U.S.–India nuclear agreement; the first-ever boundary-related agreement between India and China; India's decision not to use overt force against Pakistan in response to the 2008 terrorist attacks in Mumbai; the 2009 defeat of the Tamil rebellion in Sri Lanka; and India's disavowal of the first-use of nuclear weapons. Menon examines what these choices reveal about India's strategic culture and decisionmaking, its policies toward the use of force, its long-term goals and priorities, and its future behavior.

Choices will be of interest to anyone searching for answers to questions about how one of the world's great, rising powers makes its decisions on the world stage, and the difficult choices that sometimes had to be made.

Shivshankar Menon brings coherence, insight, and narrative verve to crucial episodes in India's emergence over the 40-plus years that span his distinguished and eclectic career. Many of the choices he writes about benefited from his own sagacity. In addition to his skill as a diplomat and policymaker on behalf of his own country, he has a rare gift of understanding the sources of other countries'sense of their own aspirations, interests, and anxieties. These virtues make for a brilliant contribution to the annals of international relations.
Strobe Talbott, President, Brookings Institution and former U.S. Deputy Secretary of State
Written by one of India's premier foreign policy intellectuals and practitioners since the country's independence, Shivshankar Menon's brilliant analysis shines a powerful beam into the shadows of Indian government decisionmaking in recent years. An indispensable book for anyone who wants to understand Indian foreign policypast, present, and future.
Robert Blackwill, former United States Ambassador to India
Shivshankar Menon's Choices is a short book concentrating on five major challenges that Indian leaders have had to confront since independence, chosen because he was involved in all of them. It is written simply and powerfully. As Ambassador, High Commissioner, Foreign Secretary, and National Security Adviser, Menon played roles that were not insubstantial, but he writes with modesty and objectivity. The last chapter of the book begins with a quote from Mahatma Gandhi that "True power speaks softly. It has no reason to shot." That describes not just Menon but also the India he portrays.
George Yeo, former Foreign Minister, Singapore
Finally an authoritative, accessible, and analytical account of contemporary Indian foreign policy, written with sophistication and style. Menon's exposition of five key choices is absolutely required reading for anyone interested in why India does what it does. It has no peer. --
Kanti Bajpai, Wilmar Chair in Asian Studies, Lee Kuan Yew School of Public Policy, National University of Singapore" --Ce texte fait référence à l'édition hardcover.

Shivshankar Menon is a distinguished fellow in the Foreign Policy program at Brookings. His long career in public service spans diplomacy, national security, atomic energy, disarmament policy, and India's relations with its neighbors and major global powers. Prior to joining Brookings, Menon served as national security advisor to the Indian Prime Minister from January 2010 to May 2014 and as India's foreign secretary from October 2006 to August 2009. He currently serves as chairman of the advisory board of the Institute of Chinese Studies in New Delhi. --Ce texte fait référence à l'édition hardcover.

Sohrabrostam
5,0 sur 5 étoiles A rare Showcase of P V Narasimha Rao's Brilliance
Commenté aux États-Unis le 2 décembre 2016
Achat vérifié
Given his long stint in Beijing and in New Delhi gives Menon first hand knowledge of what he is talking about. His observation of the Mumbai attacks and how Pakistan as society is hard wired as far as terror goes makes for very gloomy reading. This adds to the steady drum beat of assessments by Barack Obama, Madeleine Albright, Christine Fair and Christopher Jaffrelot.

Separately, The perspectives from the inside esp. on how PVN handled China border issue is a rare insight into this much under praised great Prime Minister of India (probably the best Prime Minister the Congress ever managed to produce)
En lire plus
Une personne a trouvé cela utile
Signaler un abus
Traduire les commentaires en Français