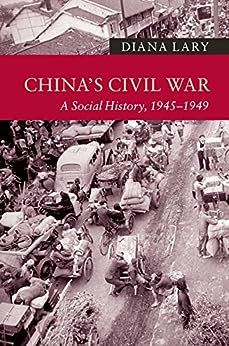 'Professor Lary has analysed in depth the social forces that prepared for the CCP's victory. She writes with deep compassion for the Chinese people who have gone through the greatest social upheaval in their history. A huge contribution to the understanding of China's Civil War.' Pai Hsien-Yung, author of Taipei People

'The Chinese Civil War of 1946–9 devastated China and brought in a powerful new regime. Yet there has been little attention to the social history of the conflict. Diana Lary's superb new book fills that gap. In compelling and often moving prose she moves from the military to the social aspects of the war, taking us from the generals' decision rooms to the streets packed with refugees. This is a much-needed book that chronicles one of the century's most important wars.' Rana Mitter, Director, University of Oxford China Centre

'What Diana Lary has achieved is a tour de force, a wonderful telling of the tumultuous social history of the Chinese Civil War through personal anecdotes and stories of individual and family experiences. Expertly crafted, the book fills a huge hole in our understanding of the Chinese civil war and its subsequent impact on the social history of the PRC.' Stephen R. MacKinnon, Arizona State University

'Lary synthesizes a wealth of diverse sources to piece together a detailed and gripping account of the last years of the Chinese civil war, which was fought between Guomindang (GMD, Nationalist) and Communist (CCP) forces … [Her] excellent monograph, her third in Cambridge's New Approaches to Asian History series, focuses on the daily experiences of Chinese from different strata of society. Her colorful writing keeps readers engaged, even though the subject is one of ultimate tragedy … Lary gives equal treatment to CCP and GMD soldiers and supporters as well as those in between, and she ends each chapter with a short section of biographies that allows readers to connect her macro story with individual experiences. She also juxtaposes the mid-twentieth-century civil war with comparable occasions from China's past by including excerpts from famous historical poems and idioms … a fine addition to any general collection. Summing up: highly recommended.' P. B. Guingona, Choice

'China's Civil War is a thoughtful and well-composed volume that breaks the mould of telling military history by placing valuable insight on the social dimensions of civil strife. Diana Lary's interweaving of accounts of the war with people's lives illustrates the conflict's pervasiveness across several social strata in Chinese society, reminding us that countless numbers of everyday Chinese endured significant hardship in wartime, and even thereafter, in both Chinas, many more still seek to sew the broken pieces of their lives back together.' Matt Galway, Pacific Affairs Book Review

'This is the first comprehensive book to offer an invaluable review on the social history of China during the period of Chinese inconsistency and chaos. The author, through a detailed sociological approach, has successfully identified social forces that finally won the civil war for the leadership of China's Communist Party … This book is then one of the best studies addressing China's civil war; its reading is therefore recommended to specialists in Chinese studies and sinologists.' Ghasem Torabi, Europe-Asia Studies --Ce texte fait référence à l'édition hardcover.

Diana Lary is Emeritus Professor of History at the University of British Columbia, Vancouver. She completed both her degree and PhD at the University of London. She has spent several years in China, the first time teaching English (1964–5) and later working as the resident sinologist in the Canadian Embassy in Beijing (1985–7). As a Professor in Canada, Lary has focussed on modern China, in particular on the impact of warfare on Chinese society. She also works on Chinese migration, within China and outside the country. She has travelled extensively in Asia and spent long periods doing research in China, Taiwan and Hong Kong. --Ce texte fait référence à l'édition digital.