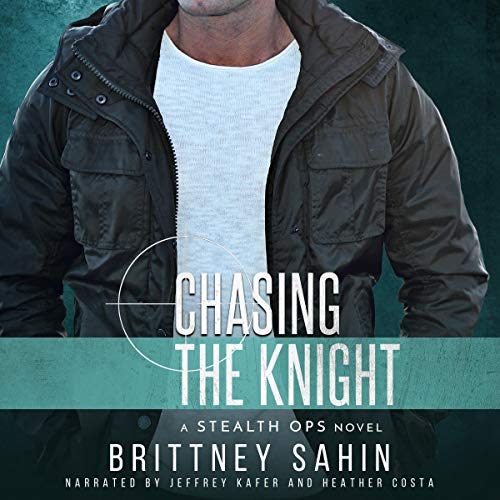 When Wyatt left England, he said goodbye to his privileged upbringing and forged his own path. After years of running operations for an elite unit of Navy SEALs, he's satisfied with his mission-focused life until a messy entanglement walks through the door.

Natasha Chandler doesn't exist - and that's the way she likes it. Total dedication to her cover is precisely what makes her a great CIA officer. The career she loves exacts a heavy price, though: Family, identity, relationships. But while chasing one of the most wanted criminals in the world, the rugged and sexy Teamguy she can't seem to forget walks back into her life and has her questioning everything.

Working together to hunt down an elusive cyber-terrorist, Wyatt and Natasha are forced to face their past, expose their secrets, and survive the explosive chemistry mounting between them. And when a young woman connected to Wyatt winds up in the crosshairs of the hacker's deadly game, he and Natasha must protect her and others from falling victim to the next attack.

Will the obsession for justice cost them their chance to be together - or will they get their shot at love?

The Stealth Ops Team - Navy SEALS who handle covert ops for the president in the U.S. and around the world - under the guise of an alias, Scott and Scott Securities.

Each audiobook in this action-packed romantic suspense series can be listened to as a standalone.

10th August 2014 by Tracey Grant.
5,0 sur 5 étoiles Oops She’s Done It Again!!
Commenté au Royaume-Uni le 20 février 2020
Achat vérifié
Brittney is such a beautiful writer. This book had me hooked from the first page. Our Brit boy Wyatt has had his world turned upside down in this book in a good way. You could say it took a while for Wyatt and Natasha to get them selves together with all the interruptions. The emotions that he was going through I just wanted to reach inside the book and give him a big hug but Tash beats me to it. Underneath Wyatt’s big burly exterior he really is a big softy. Natasha is differently the right women for him, she is feisty, loving and funny. I love the the way Brittney keeps us up to date with the antics that the rest of the team are getting up to. Can’t wait for AJ’s book and the team definitely need a K9 (just saying Brittney, Lol).
En lire plus
Signaler un abus
Traduire les commentaires en Français

Allinson
5,0 sur 5 étoiles Sexy Brit
Commenté au Royaume-Uni le 4 septembre 2020
Achat vérifié
Wow - did not expect to like Wyatt as much as I did.❤️❤️❤️ He's the Brit on the team & was a really interesting character.
Loved the way the story unfolded - geeks definitely have more fun than you would imagine
Another complex well told story that means stopping mid read is unlikely 😄 Oh sleepless nights I here you calling.
Lots of twists & turns & breadcrumbs for the next book.
Posh Brit to smooth Southern cheeky hunk. Yes please.
En lire plus
Signaler un abus
Traduire les commentaires en Français

TCH
5,0 sur 5 étoiles What an awesome book and series.
Commenté en Australie le 23 juin 2020
Achat vérifié
Brittney you have done it again. Just when I thought I was safe, getting everything done that needed to be attended too, you come out with a new book. WOW!!! What a book.
This is one amazing book by an absolutely brilliant author!
This is the 6th book in the Stealth Ops Series, but is the first book about the Echo Team.
Wyatt and Natasha and are amazing together the chemistry is just so tangible, it’s tingling.
The storyline is so well written, you actually feel part of the story.
I can’t say enough about how good a read it is. Buy, read you won’t be disappointed!
Brittney, I just love your work! Thank you.
En lire plus
Une personne a trouvé cela utile
Signaler un abus
Traduire les commentaires en Français

MelA1983
5,0 sur 5 étoiles Hot! Wow! Amazing!
Commenté en Australie le 20 février 2020
Achat vérifié
So my turn to write a review. Holy hell Brittney, just when I thought your writing couldn’t get any better you go and do it again!! I love these series of books and the chemistry is off the charts. I know you have placed a lot of research in these books and it shows in the realistic way the books play out. If there is book or series you need to read, it’s these books.
En lire plus
Signaler un abus
Traduire les commentaires en Français

Trista A
5,0 sur 5 étoiles Extraordinary Series
Commenté au Canada le 23 février 2020
Achat vérifié
Book One of Echo Team did not disappoint. Wyatt and Natasha’s story was fabulous from the first page to the last. Absolutely loved it.
If you haven’t already picked up one of Britney’s books door yourself a favour and get on it already!!
Stealth Ops series is one I’m constantly re-reading.
En lire plus
Une personne a trouvé cela utile
Signaler un abus
Traduire les commentaires en Français
Afficher tous les commentaires