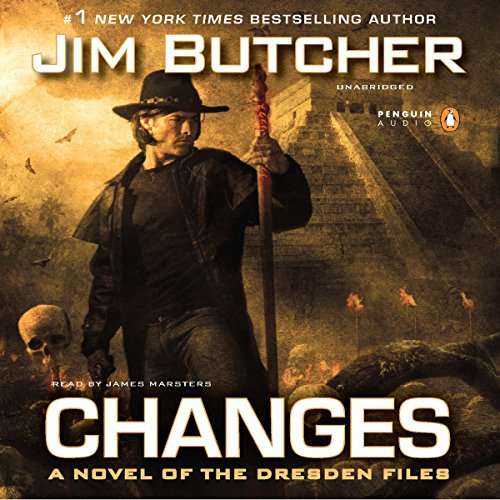 The new novel in the #1 New York Times best-selling Dresden Files series. Long ago, Susan Rodriguez was Harry Dresden's lover - until she was attacked by his enemies, leaving her torn between her own humanity and the bloodlust of the vampiric Red Court. Susan then disappeared to South America, where she could fight both her savage gift and those who cursed her with it.

Now Arianna Ortega, Duchess of the Red Court, has discovered a secret Susan has long kept, and she plans to use it - against Harry. To prevail this time, he may have no choice but to embrace the raging fury of his own untapped dark power. Because Harry's not fighting to save the world...He's fighting to save his child.

Marmotte
5,0 sur 5 étoiles The best book in an amazing series
Commenté en France le 29 août 2018
If you're not repeatedly feeling like you're dying but that it's the best book even while reading this, you're reading it wrong.
En lire plus
Utile
Signaler un abus
Traduire les commentaires en Français
Afficher tous les commentaires

catlady66
5,0 sur 5 étoiles Wow blown away
Commenté au Royaume-Uni le 25 novembre 2020
Achat vérifié
Make sure got tissues ready this one is a tear jearker for me it was sad but I still loved it lots of action in this one didn't want it to end he never dissapoints with his books on to the next one in the series hope you join me if you want action drama but romance comedy a lot of great story telling dont wait around grab a copy of this series you won't be dissapointed i never am so glad I took a risk on this series worth every penny I have spent on some fantastic books
En lire plus
Signaler un abus
Traduire les commentaires en Français

lyra
5,0 sur 5 étoiles Whoa! Didn't see that coming!
Commenté au Royaume-Uni le 5 août 2014
Achat vérifié
For me the last three Dresden books have been excellent. Butcher has grown as a writer and though the books are to some extent formulaic, his story telling and characterisation has improved significantly as the series progressed; I enjoy the dry humour and like the fact that he doesn't spend half the novel on recaps. I read the first 5 or so under sufferance with other reviewers promising the series improves. They were right and this one one is a real game changer.
Butcher develops his narrative with the usual twists, turns, dead alleys, dry humour and then sneaks in THAT ending. If you enjoyed the early Dresden files and like the predictable repetitive pattern that admittedly works well by the 10th book, reread the early books or try a nice safe romance instead. There is a good reason this book is called Changes. I can't help thinking that Butcher has been reading GRRMartin.
One of the strengths of the later books is that Butcher follows through the consequences of events and doesn't shrink from developing his characters even if that development is not pretty. That is definitely true of this one. Excellent read!
En lire plus
Signaler un abus
Traduire les commentaires en Français

Stephen Davies
4,0 sur 5 étoiles Magic
Commenté au Royaume-Uni le 8 juillet 2015
Achat vérifié
Probably more of a 4.5 out of 5 really: I've read the series since the beginning and in all honesty for sheer consistency few authors can match Jim Butcher. Sure they all tend to follow a formula, but invariably even the best tend to get lazy and throw in the odd stinker or even worse simply go downhill. For whatever reason, The Dresden Files is as reliable as ever: probably down to the respect the author has for the fans who buy his work. All the old characters are here, and Harry moves off into a different direction: with action galore and all guns blazing. Sorry this isn't a 5 star rating, but it was very close. To anyone checking out this review wondering what the series is like after seeing the tv series on sky, let me tell you the books are far superior, but if you do decide to check out the Dresden Files do yourself a favour and work your way through the series from book 1.
Happy reading.
En lire plus
Signaler un abus
Traduire les commentaires en Français

Erin Britton
5,0 sur 5 étoiles Changes
Commenté au Royaume-Uni le 15 octobre 2013
Achat vérifié
Harry Dresden, wisecracking private eye and the only professional wizard listed in the Chicago phonebook, has never been particularly lucky in love. His first paramour Elaine Mallory faked her own death after going dark side and almost succeeding in helping former mentor Justin DuMorne to enthral Drseden while, more recently, Anastasia Luccio, Captain of the Wardens of the White Council, was only with him as a result of a psychic control spell worked upon her by renegade wizard Samuel Peabody. Even more painful, however, was Dresden's relationship with Susan Rodriguez, a former reporter for The Midwestern Arcane tabloid newspaper. Rodriguez was working the paranormal beat for the Arcane when she met Harry Dresden but, although the two became involved, Dresden tried to shield her from the truth about the extent and variety of supernatural creatures that could be found prowling around Chicago. While his intentions were good, Dresden's plan backfired spectacularly tragically when, unprepared to face Bianca, a powerful Red Court vampire, Susan Rodriguez was bitten and transformed into a half-vampire. Plagued by a newly awakened bloodlust and destined to remain a half-vampire until she feeds on a human, Rodriguez left Chicago, breaking Dresden's heart and turning down his marriage proposal in the process, to join the Fellowship of Saint Giles, an organisation formed of half-vampires and dedicated to bringing down the Red Court.

At the beginning of Changes, the twelfth novel in Jim Butcher's Dresden Files series, Susan Rodriguez had been absent from Harry Dresden's life for almost a decade and so it is with understandable trepidation that Dresden answers a telephone call from her:

I answered the phone, and Susan Rodriguez said, "They've taken our daughter."

After leaving Chicago and joining the Fellowship, Rodriguez had discovered that she was pregnant with Dresden's child. The baby girl was born a regular human, was named Maggie in honour of Dresden's mother, and then, due to Rodriguez's fear that the child would become a target for one if not all of the supernatural factions that had come into conflict with herself or Dresden at some time or other, adopted by a regular family and raised completely unaware of her magical heritage. Somehow Arianna Ortega, a particularly diabolical Red Court vampire who blames Dresden for the death of her husband [during the events of Death Masks, the fifth Dresden Files novel], became aware of Maggie's existence and has kidnapped the girl. Ortega intends to kill Maggie and use her blood in a violent ritual sacrifice designed to enact a blood curse which will also destroy Rodriguez and Dresden.

With the White Council of Wizards and the Red Court are in a state of détente, Dresden knows that he can expect no help from his fellow wizards in his quest to save his daughter and so, save for the assistance of a loyal band of well-meaning friends, he decides to go it alone against the Red King and his entire vampire Court.

Changes is the most action packed of all the Dresden Files novels so far. While the book itself is one of the longest in the series, the action takes place over a very short period of time as Dresden rushes to locate Maggie and then formulate a battle plan to rescue her from the Red Court and prevent Ortega from unleashing the blood curse. Dresden has faced apocalyptic danger before and come out on top but this time it's not just his own life on the line. Although capable of reacting with great power if provoked, Dresden has always turned away from the dark forces that tempted him however useful their assistance might be but, with his daughter's life at risk, the temptation of the dark is greater than it has ever been. In Changes Butcher makes use of nearly all of the Dresden Files popular supporting cast [even Mouse gets a few lines!] and also offers some intriguing answers and explanations for issues that have been running through the previous novels in the series. Changes is yet another excellent instalment in what is arguably the finest urban fantasy series being written at the moment.

Be warned though - fans will both love and curse Jim Butcher for the cliff-hanger at the end of Changes and will no doubt be counting down the days until the next of the Dresden Files is released.
En lire plus
Une personne a trouvé cela utile
Signaler un abus
Traduire les commentaires en Français

Temple Phoenix
5,0 sur 5 étoiles Boy, They Weren't Kidding
Commenté au Royaume-Uni le 18 mars 2012
Achat vérifié
Man... when they said Changes, they really meant it. Those of us who have been long-term fans of the Dresden Files series have been getting complacent in the last few years. Yes, the books are all kinds of awesome, but you can be assured that each one will follow a certain formula: a mystery to solve, banter with Murphy, hanging around the apartment with Mouse and Mister...

Well, no longer. From the first, utterly gut-punching sentence of this installment, Jim delights in overthrowing everything you know about the Dresdenverse. It's incredibly hard to say just how big the changes in the book are without dealing in massive spoilers, but rest assured that by the end, nothing you are used to will remain.

Of course, change for the sake of change would be a terrible thing, but as usual, Butcher delivers a barnstorming novel with all the action and great characterisation we've come to expect. Old favourite characters return, ancient plot points are resumed, and magical conflict happens on a massive scale. This is the author on top form, and every minute spent reading is a joy.

I'm warning you now... for the first time ever (as with so much in this installment), the story ends with a cliffhanger. However, the quality of the preceding tale is such that all this does is make you desperate... DESPERATE... to read the next one.
En lire plus
Signaler un abus
Traduire les commentaires en Français
Afficher tous les commentaires
Retour en haut
Pour mieux nous connaître
Gagnez de l'argent
Moyens de paiement Amazon
Besoin d'aide ?
© 1996-2021, Amazon.com, Inc. ou ses filiales.