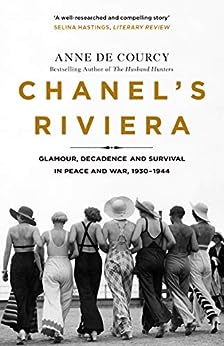 Providing insight into the occupation of France and its terrifying impact on rich and poor alike, you'll come away from reading it both better informed and utterly transported (Francesca Brown STYLIST magazine)

A riveting read about the best and very worst of times and at the heart of the story is the morally ambiguous (some may say morally bankrupt) Chanel herself. (Sarra Manning RED ONLINE)

A well-researched and compelling story. Drawing on an immense volume of material, she has succeeded not only in constructing an intriguing portrait of Chanel herself but also in expertly conjuring the two very different worlds that then existed side by side (Selina Hastings LITERARY REVIEW)

A highly amusing guide to the shenanigans, foibles and affairs of the rich and famous at a time when it seemed anyone who was anyone spent weeks at a time on the Riviera
... De Courcy has dug deep into a rich seam of stories about the coastal region of France

Anne de Courcy's Chanel's Riviera gives us delicious gossip. France's leading designer was the epitome of
chic. When she acquired a magnificent villa on the Cote d'Azur, the rich and famous - among them Jean Cocteau, H. G. Wells, Salvador Dali (and, after the abdication, the Windsors) - followed. They created a gilded and hedonistic world, which continued until the fall of France in 1940.

De Courcy is very powerful on the fall of France - the sorrow and the pity ... De Courcy, in this gripping, rousing study, sees Chanel as a Marie Antoinette figure, simultaneously shrewd and other-worldly, protected by an armour of absolute self-interest. (Roger Lewis DAILY TELEGRAPH)

Anne de Courcy is the author of thirteen widely acclaimed works of social history and biography, including THE HUSBAND HUNTERS, THE FISHING FLEET, THE VICEROY'S DAUGHTERS and DEBS AT WAR. In the 1970s she was Woman's Editor on the LONDON EVENING NEWS and in the 1980s she was a regular feature-writer for the EVENING STANDARD. She is also a former features writer and reviewer for the DAILY MAIL. She lives in London SW3.

La Flâneuse Anglaise
3,0 sur 5 étoiles Well written but no new information here
Commenté au Royaume-Uni le 20 juillet 2019
Achat vérifié
Chanel's Riviera feels like a book slightly lost in no mans land - neither Chanel nor the Riviera feel like they have been given enough space to be really examined. Sadly the Riviera is made up of walk on parts from seemingly very interesting people we don't get the chance to know and Chanel's behaviour during the war isn't examined enough, she remains a hazy character throughout.

I think if you want a book on the Riviera - Mary S Lovell's "The Riviera Set" is a good read. Don't let this review put you off Ann De Courcy books, this one just wasn't as strong in my opinion as her others.
En lire plus
15 personnes ont trouvé cela utile
Signaler un abus
Traduire les commentaires en Français

David
5,0 sur 5 étoiles No red ink
Commenté au Royaume-Uni le 6 août 2019
Achat vérifié
Chanel's Riviera is an enthralling, informative secondary source account of life on the French Riviera, commencing in 1930 until the closing stages of World War II. Hitler always regarded the French Third Republic (1870 until 10 July 1940) as a threat to Germany, one which had to be eliminated. fighting on two front was militarily, industrially and financially impractical. Hence, blitzkrieg was his approach to war. The attack on France commenced at 4:35 am French time on 10 May 1940. An armistice was signed on 22 June 1940, which came into effect on 25 June, exactly 46 days.! Initially, life on the Côte d'Azur continued to be populated by those who were wealthy, Coco Chanel being one of the prime examples. In 1925 Chanel met Hugh Grovener, 2nd Duke of Westminster, known as 'Bendor' to his intimates at a party in Monty Carlo. Their romantic liaison was to last for the next ten years. In 1927, Chanel purchased a plot of land at Roquebrune, Cap-Martin and had the only home she ever owned designed and built for her, which she named La Pausa, as a private love-nest for her and Bendor. However, the affair had run its course by about 1935 and having lost her subsequent lover, Paul Iribe, who collapsed during a game of tennis at La Pausa and died of a heart attack in her arms. she sold the property and spent the remainder of her life living at the Ritz, Paris. Throughout the war, Chanel, who was both pro-Nazi and highly antisemitic, took a new and controversial lover, Baron Hans Günther von Dincklage, known as 'Spatz', an SS intelligence officer. Patriotism to France was never part of Chanel's character. Life on the Riviera gradually became more dangerous and restricted. Equally, food, electricity and fuel progressively became scarce but little of these factors impacted on Chanel. On the 28 August 1944 the German's began their withdrawal from France. Chanel was interviewed by members of the Comité d'épuration but after brief questioning was released without charge. Taking the hint, she and von Dincklage made their way to neutral Switzerland, where she remained for the next eight years, until her return to Paris to restart her couturier business. This is a well researched and interesting read, concerning what until now has been an overlooked part of French history, which introduces a range of other actors, many of whom were part of the Chanel 'set'. This is a highly enjoyable and interesting read. By the way, the significance of 'red ink' is explained in the book.
En lire plus
8 personnes ont trouvé cela utile
Signaler un abus
Traduire les commentaires en Français

Mrs. S. D. R.
5,0 sur 5 étoiles Totally drawn in
Commenté au Royaume-Uni le 2 octobre 2020
Achat vérifié
This is yet another compelling work by Anne de Courcy. Many of her histories and subjects overlap and in fact for a reader like myself that works really well - you build-up a broad image of the era and the way of life of the period in your own mind from reading many books by her one after the other. Although this book might appear to focus on Chanel herself, it covers a far wider range of other lives and characters; everyone from the Duke of Windsor to Evelyn Waugh and Picasso, focussing primarily on the Riviera itself, whilst always deftly weaving Chanel back in as the history progresses and the war changes the lives of those on the Cote d'Azur. The image of the South of France at that time was one of grace, elegance and serenity; sumptuous villas, superb entertainments and gorgeously dressed women and men driving the coast in vintage vehicles. Having known the area since 1969 I always feel some pain reading and viewing histories and photographs of the old Riviera as the glorious coastline has been ravaged and so much of it destroyed by greed and development - the worst of it since the sixties. But it is still a taste of paradise to dip your toes metaphorically into the waters of the era when Chanel and her friends relaxed at her villa with the glorious coast of her time as the backdrop.
En lire plus
2 personnes ont trouvé cela utile
Signaler un abus
Traduire les commentaires en Français

Telaloopy
1,0 sur 5 étoiles Badly written, even repeats itself nearly word for word in a number of areas.
Commenté au Royaume-Uni le 22 mars 2020
Achat vérifié
All the chapters start in one place and ramble through the descriptions of about 10 people, ending up some where completely different. I thought I was going bonkers, but it does actually repeat information about various people written slightly differently. I thought I’ve read this before, well I had just 3 chapters ago. When on your kindle it says there is 7 hours of this book left. Give up, life’s to short. There’s not even that much about Chanel in it.
En lire plus
4 personnes ont trouvé cela utile
Signaler un abus
Traduire les commentaires en Français