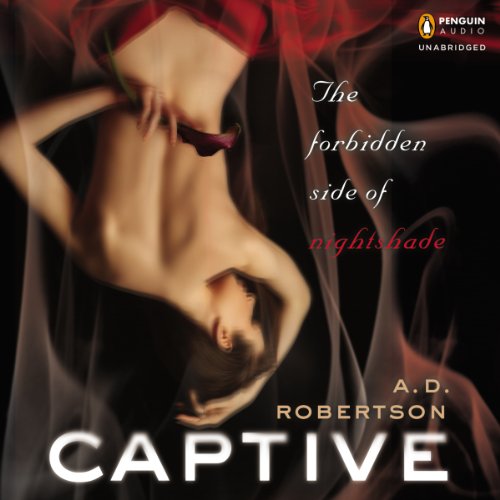 Captive: The Forbidden Side of Nightshade

Sworn enemies are plunged into a steamy, forbidden romance in the first book of a new series that explore the darker side of the richly imagined world of Nightshade.

Twenty-five-year-old Tristan Doran is a direct descendant of the Keepers - witches who have embraced dark magic. Deferring only to his overlord, Lord Bosque Mar, Tristan enjoys incredible power and privilege. For most of his life, he has been kept largely out of the centuries-old Witches War. But then Sarah, a beautiful young human Searcher, is captured and imprisoned in his castle. Blinded by their passion, captive and captor give in to their desires - only to learn that their love is at the heart of a prophecy predicting the downfall of the Keepers’ ages-old reign.

thecovercontessa
4,0 sur 5 étoiles A new look into the world of nightshade, adult style!
Commenté aux États-Unis le 15 mars 2014
Achat vérifié
I was excited to read this book when I found out Robertson had written it. I loved the Nightshade series and really wanted to see what the sexier side of this life would bring. I was not disappointed.

Blurb from Goodreads:
The first adult novel set in the world of the New York Times bestselling Nightshade series, Captive delivers a steamy, forbidden romance between sworn enemies drawn together by an irrepressible desire.
Twenty-five-year-old Tristan Doran enjoys a life of incredible power and privilege. As a direct descendant of the Keepers—witches who have embraced dark magic—he defers to no one but his overlord, Lord Bosque Mar. For most of his life, Tristan has been kept out of the centuries-old Witches War, his bloodline too valuable to risk in battle.
But when a beautiful, young human Searcher named Sarah is captured and made a prisoner in his Irish castle, Tristan’s infatuation with her flings him headlong into the fray. Captive and captor, unable to contain their longing, embark on a passionate, forbidden romance together—only to learn that their love is at the heart of a prophecy predicting the downfall of the Keepers’ ages-old reign.
Captive explores the darker side of the richly imagined Nightshade universe, a fantasy world of powerful dark witches, shape-shifting wolf warriors, and fascinating history. The first of three erotic novels, Captive delves deeply into the fiery, illicit romance of two young lovers whose very desires invite their doom.

I have to say that this story was quite captivating. I wasn't sure if I would like it. I had recently read Snakeroot and wasn't as impressed by it as I was by the Nightshade trilogy. But this book turned out to be surprisingly good. I love how the story ties in to the Nightshade trilogy. I have to say it might be a bit hard to write this review without giving things away, so I will be brief.

I have to say that I loved how the book dove right into the story of Tristan and Sarah. You get just a bit of background in the first few chapters, but then Sarah is off on a mission where she suddenly, and unexpectedly, finds herself a prisoner. You can only imagine how things unfold from there.

Sarah is a kick butt character. That girl can hold her own. She's snarky, sexy, smart, capable, and so independent. She doesn't scare easily, an important part of being a searcher, I would think. I wish I had a bit more of a history of Sarah, which will perhaps get in future books that tie in to this part of the series. I'd love to know where she came from and how she became a searcher.

Tristan: smart, sexy, devilishly handsome, strong, powerful and in control. That is until he meets Sarah and she pretty much turns his world up-side-down. A keeper, sent to an island where he is basically alone, except for his guardians for which he has keep, a few servants, and an Incubus and Succubus. He definitely won me over to the keeper side. While most of the time I would get angry with them in the Nightshade series, I was strangely attracted to his life and his power. And I felt sad for him that he was so alone. I love his character development in this book. We see him go from captive Keeper to someone who wants more than just to rule over a bunch of wolves.

Of course Bosque Mar makes his appearance in this book. He is just as evil as he appears in the other books in this series. Just the thought of him brings me shivers.

This book is definitely mature. There is a lot of sex and innuendos that happen. I think it all leant a great deal to the book. But there is that insta-love that I don't necessarily enjoy for the most part. I think with books such as this, that often happens, though. And what's even more interesting is how enemies seem to bond in this book, making it for an interesting mix of suspense. I went into the book thinking it would be all about the sex, but the story is rather engaging and interesting (especially if you are a fan of the series).

Cremer has a great writing style. There's nothing boring about her descriptions. I do think that if you have not read the other books in this series (at least the original Nightshade series) you will not understand the world. You definitely need hat background to help you to understand the relationships between the Keepers and the Searchers.

There is a definite connection to the Scion that is introduced in the Nightshade series. Again, you need this background or you will be confused. I didn't initially connect the dots to figure it all out, but about half way through the book I realized where it was going. It didn't deter me from finishing at all. And I ended up truly enjoying Sarah and Tristan's story.

Readers who enjoyed Cremer's Nightshade series will enjoy this book, but it is definitely intended for a more mature audience and I would not recommend it for anyone under 18.
En lire plus
Une personne a trouvé cela utile
Signaler un abus
Traduire les commentaires en Français

Jessica
5,0 sur 5 étoiles Loved It
Commenté aux États-Unis le 15 mars 2015
Achat vérifié
I loved the NightShade series when I was a young teenager(minus the ending of Bloodrose which I hated) but her writing is awesome, so when I found out the author made an adult novel surrounding this series, I was ecstatic.This book holds the same otherworldly & sensual atmosphere like the original NightShade series. I hope she continues to write more adult novels in the future.
En lire plus
Signaler un abus
Traduire les commentaires en Français

Nick Lopez
5,0 sur 5 étoiles Expanding the world of Nightshade.
Commenté aux États-Unis le 13 janvier 2015
Achat vérifié
Captive is an interesting book and it has expanded the world of Nightshade and I love it. I suggest that anyone adult can read this book because as a prequel, it is easy to understand. I can't wait for the sequel.
En lire plus
Signaler un abus
Traduire les commentaires en Français